National Fish Hatcheries rear fish and other aquatic species – like crayfish and mussels - to help restore and sustain important populations for the benefit of the American people. Freshwater mussels play very important roles in our rivers and lakes by filtering the water and creating habitat for fish and aquatic insects fish like to eat. With declining fish and freshwater mussel populations becoming prevalent across the world, fish hatchery operations are more important now than ever.

Erwin National Fish Hatchery has worked closely with multiple partners to assist in the recovery of multiple freshwater mussel species. Some of those species include the Appalachian Elktoe, Round Hickorynut, and the Snuff box mussel.

Erwin NFH is also an active partner in the recovery of the Southern Appalachian Brook Trout.

Erwin NFH participates in lake sturgeon research every year, assisting other agencies with measuring, weighing, and tagging the fish. 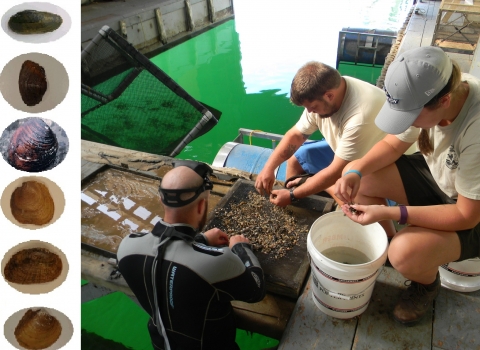 Freshwater mussels are currently one of the largest faunal groups listed under the Endangered Species Act (ESA).  One of the goals of the U.S. Fish and Wildlife Service (USFWS) is to stabilize and recover populations of depleted aquatic species, including mussels, and reduce the need for listing species under the ESA.  One might ask, “Why bother?  Why worry about an organism...