Freshwater mussels are currently one of the largest faunal groups listed under the Endangered Species Act (ESA).  One of the goals of the U.S. Fish and Wildlife Service (USFWS) is to stabilize and recover populations of depleted aquatic species, including mussels, and reduce the need for listing species under the ESA.  One might ask, “Why bother?  Why worry about an organism that most people never even see?”  Freshwater mussels live on the bottom of streams, rivers, and lakes and are an important part of the food web.  They are filter feeders, removing algae, bacteria and other organic material from the water, thereby helping to improve water quality.  Mussels are, in turn, eaten by predators such as fish, raccoons, and muskrats.  These important roles support the cycle of life in the aquatic ecosystems in which these animals occur.  Mussels are an important indicator species.  They are easily affected by pollution and habitat alteration.  Declining mussel populations are an indication that something is not right and corrective action is necessary.

The Dale Hollow National Fish Hatchery (NFH) took part in a three year mussel culture project, beginning in FY 2000, designed to transfer mussel culture technology from the Tennessee Cooperative Fishery Research Unit to the National Fish Hatchery System (i.e., Dale Hollow NFH, TN and Wolf Creek NFH, KY).  This early effort focused on growing juvenile mussels in closed, recirculation systems.  The juvenile mussels were fed algae grown in trout egg hatching jars.  As have other mussel holding facilities, Dale Hollow NFH experienced problems keeping juvenile mussels alive for prolonged periods.  The problem with growing some species of mussels is being able to meet their nutritional requirements.  Developing techniques to enable long term survival and growth is important because the larger we can rear juvenile mussels, the better chance they have to survive when they are reintroduced into the wild.

Culturing mussels in a lab type setting can be very labor intensive and costly.  The hatchery became involved in a new project in 2013 to attempt culturing mussels in cages suspended in Dale Hollow Lake in an effort to develop a more effective and efficient method of

producing sub-adult mussels for use in ongoing recovery/restoration efforts.  Partners include the U.S. Army Corps of Engineers (Corps), Tennessee Cooperative Fishery Research Unit (Unit), USFWS Ecological Services Field Office, Tennessee Wildlife Resources Agency (TWRA),      Friends of Dale Hollow NFH (Friends Group), and Natchitoches NFH, Louisiana.  The TWRA used shocking boats to collected spotted bass from Dale Hollow Lake in April 2013 for use in the culture trial.  The fish were transported back to the hatchery in aerated water containing salt and placed into two 280 gallon, aerated circular tanks.  Lake water was added, as needed, to keep the water temperature at approximately 60 degrees F.  Two weeks later, Unit personnel infested half of the fish with glochidia from the mucket (Actinonaias ligamentina)  and half with glochidia from the pink mucket (Lampsilis abrupta).  The pink mucket is a federally-listed species.  Both mussel species use black bass, including spotted bass, as a host fish.  Glochidia are the parasitic life stage of North American freshwater mussels.  They attach to the gills of the host fish and become encapsulated in the gill tissue, deriving nutrients from the fish.  Once infested with glochidia, the host fish were maintained in the circular tanks for a period of approximately three weeks by adding fresh water on a regular basis and feeding the host fish rainbow trout forage.  The host fish were then moved from the hatchery to Dale Hollow Lake.  The cages were placed onto their bases and the cage bottoms were covered with river sand.  The two lots of host fish, each infested with a different species of mussel glochidia, were placed into the cages.  The cage tops were secured with plastic wire ties and moved into place on the suspended floating racks.   The racks were moored in a Corps boat house located in a small embayment near Dale Hollow Dam.  The boat house is an ideal platform for such a project as it is secure, does not require adjustment as the lake level rises and falls, and does not present an obstacle for boat traffic.  The host fish remained in the cages for three weeks, at which time the host fish were released back into the lake.  During this three week period, the glochidia transformed into juvenile mussels.  The juvenile mussels then detached from the host fish, settled to the bottom of the cages, and began filter feeding.  This is the point where this culture trial differs significantly from earlier trials.   Earlier trials focused on providing sustenance by feeding juvenile mussels cultured algae whereas this trial relied on the mussels deriving their sustenance by filtering out food items from the lake water.  Once the host fish are removed it becomes a waiting game.  Water temperature and dissolved oxygen were monitored weekly.  Juvenile mussels were harvested from the grow-out cages in October 2013, following a five month growing period.  Eight endangered pink mucket (Lampsilis abrupta) juveniles and 22 mucket (Actinonaias ligamentina) juveniles were recovered.  Four plain pocketbook (Lampsilis cardium) juveniles were also recovered.  The latter is a very common, widely distributed species.  Since none of the host fish were intentionally infested with glochida from this species, it is thought that some of the host fish were previously infested prior to collection from the upper end of the lake or infested fish were in the vicinity of the suspended cages.  Although the total number of mussels was not very large, the growth exhibited in a short growing season was phenomenal, making Dale Hollow Lake look very promising for future, expanded cage culture efforts.

A second culture trial began in the spring of 2014 when spotted bass host fish collected by TWRA shocking boats and walleye host fish provided by the Eagle Bend SFH were moved to the hatchery for holding.  The procedure for maintaining the fish was similar to that used in the first trial but more time was spent performing water exchanges and maintaining the salt content of the holding water at 3-5 ppt.  This change was made in order to alleviate stress and control fungus.  Unit personnel infested the spotted bass with glochidia from the pink mucket (Lampsilis abrupta) and the walleye with glochidia from the black sandshell  (Ligumia recta).  The host fish were taken off of the salt treatment just prior to infestation and were placed back on salt one week following infestation.  Studies have shown that once the glochidia become encapsulated in the gill tissue of the host fish, they will tolerate some of the chemical treatments used to maintain the health of the host fish.  The host fish were placed in suspended cages in May 2014.  Unit personnel used one of the cages to place sauger host fish that had been infested with black sandshell glochidia and maintained at the lab at Tennessee Technological University.  They also placed transformed pink mucket juveniles directly onto the sand substrate in one of the cages.  The cages were harvested in September 2014 following a four month “soak.”  The harvest yielded 601 black sandshell (Ligumia recta) juvenile mussels, ranging in size from 15 to 33 mm in length.  Most of the black sandshell mussels were harvested from the cages using sauger as host fish.  Small numbers were hearvested from the cage that received transformed pink mucket juveniles and from one of the cages using walleye as host fish.  These were assumed to be “drifters” originating from the sauger cages.  No pink mucket juveniles were harvested from any

of the cages.  All of the mussels produced from both culture trials were used to help meet recovery and restoration goals for a Natural Resources Damage Assessment (NRDA) for the Ohio River Islands National Wildlife Refuge.  A chemical spill which took place in 1999 severely impacted mussel, snail, and fish populations along a twenty-mile segment of the river.

One of the common themes, voiced by many mussel culture experts is that it is not unusual for results to fluctuate wildly from year to year.  There is more that we don’t know about mussel culture than what we know.  The important thing is to learn from your mistakes and stay the course.  We are planning to work with partners to carry out a third cage culture trial this year.   Last year we noticed that some of the sand had washed out of a number of cages. We think that this is either because of prop wash from boat traffic or from normal wave action.  Even though the floating racks are located inside of a sheltered boat house, they are still subject to an up and down movement due to normal wave action.   This year, we will use two racks designed to rest on the boat dock and two floating racks to test this hypothesis.   Black bass and walleye host fish will be brought to the hatchery and held in circular tanks.  Unit personnel will infest the appropriate host fish with pink mucket and black sandshell glochidia.  The rest of the process will follow earlier protocols.  Cage harvest should take place in September or October 2015.  Cultured mussels will again be used in ongoing Ohio River Islands National Wildlife Refuge restoration and recovery efforts. 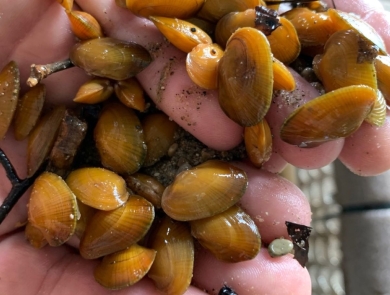 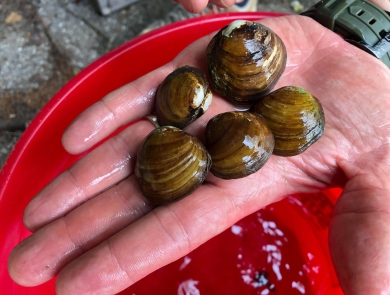 Endangered Species Act
The Hustle for Mussels
With Round Hickorynut spawning season dwindling, staff at Erwin NFH had to act fast to collect gravid females for conservation efforts!
Apr 19, 2022 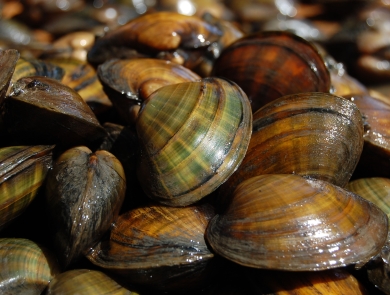 Wildlife Wonders
Flexing the Mussels of Freshwater Rivers
Beneath the surface of the water, embedded in river bottoms, hidden in estuaries, and mistaken for rocks, lurk the invisible engineers of our aquatic ecosystems. Throughout our waterways, from urban rivers to the country streams, countless freshwater mussels are cleaning the water, taking out the...
Jul 7, 2021