Located on the Indigenous homelands of the Pocomoke and Occohannock people, Chincoteague National Wildlife Refuge protects beach, dune, marsh, and maritime forest habitats. Established in 1943 to protect migratory birds, this refuge is now one of the most visited in the United States. This gem of Eastern Virginia is a birder's paradise, as well as the home of cultural treasures such as Assateague Lighthouse and the world famous Chincoteague ponies.

Chincoteague and Wallops Island National Wildlife Refuges encompass extraordinary and ever-changing lands at the edge of the sea, a place where unique habitats and wildlife flourish. In partnership with others, the refuges are a vital part of a larger system of protected lands and waters on the Delmarva Peninsula critical to migratory birds. People from around the world can visit the refuges to learn, recreate, refresh themselves, be inspired by wildlife and wild lands, and renew their connection with nature.

Remnants of Assateague Island's history can still be found throughout the refuge, so keep an eye out during your visit. 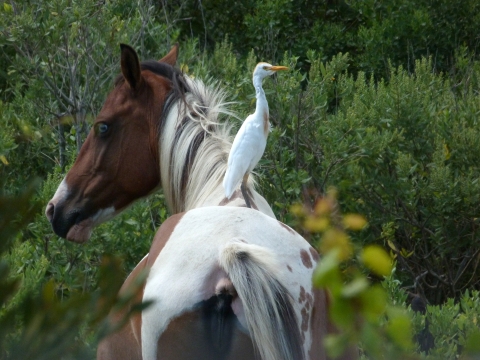 The famous "Chincoteague Ponies" are a present-day reminder of Assateague Island's past. Although no one is certain when or how the ponies first arrived on the island, a popular legend tells of ponies that escaped from a shipwrecked Spanish galleon and swam ashore. However, most historians believe that settlers used the island for grazing livestock (including ponies and other farm animals) in the 17th Century to avoid fencing regulations and taxation. Regardless of their origin, the descendants of these ponies are still living here today.

Over the past 200-300 years, these modern-day descendants of domestic horses have adapted to the hardships of living near the ocean. Prior to the refuge's establishment in 1943, the Chincoteague Volunteer Fire Company purchased the ponies and continues ownership to this day. The firemen are allowed to graze up to 150 ponies on refuge land through a special use permit from the U.S. Fish and Wildlife Service. 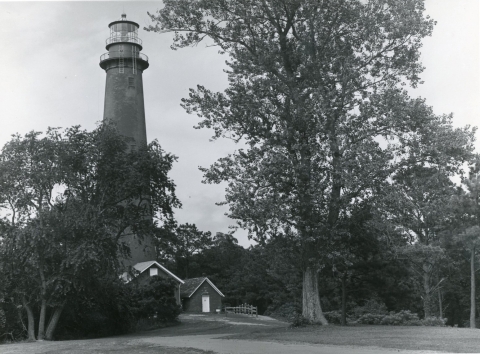 In 1833, the first Assateague Lighthouse was constructed to warn ocean travelers of the dangerous shoals offshore. Construction on a taller, more powerfully illuminated brick lighthouse began in 1860 but was delayed by the Civil War. After the war, work resumed and the lighthouse was completed in 1867. The light was also upgraded that year, to a first order Fresnel lens. In 1891, a separate oil storage building was built, and a new assistant keeper's house was constructed in 1910. In 1929, the keeper staff was reduced. In 1933, the lighthouse’s oil lamps were replaced by an electric lamp, and the original keeper's house was removed.

Today the 1910 assistant keeper's house is used as seasonal staff residence. The oil storage building is used as an art gallery during summer months. In 2004, the U.S. Coast Guard transferred ownership of the lighthouse to the U.S. Fish and Wildlife Service. While the U.S. Coast Guard maintains the light as an active navigational aid, Chincoteague National Wildlife Refuge is responsible for preserving the lighthouse. The Assateague Island lighthouse is listed on the Virginia Historic Register. In 2008, restoration of the lighthouse began to preserve this historic treasure. Extensive work was done including repairs to the gallery deck and a new paint job.

Though lighthouse tours are not available, visitors can still use the Lighthouse Trail to admire the building from the ground.

Shipwrecks along the unpredictable offshore shoals were frequent as coastal trade developed, and "wrecking", or stripping stranded ships of their cargo, became a common practice of some island dwellers. Laws prohibiting this behavior were nearly impossible to enforce. Today, storms occasionally expose shipwreck sites.

Perhaps the most famous shipwreck was the Dispatch, President Benjamin Harrison's official yacht. On October 10th, 1891 the ship ran aground 2.5 miles east, north of what is now the Woodland Trail, and 75 yards from the shore. The 730 ton schooner-rigged steamship was bound for Washington D.C. from New York City when she ran ashore just after 3 a.m. No deaths occurred, but what had once been the official yacht of Presidents Hayes, Garfield, Arthur, Cleveland, and Harrison was a total loss.

With construction of the lighthouse, development of oyster and other commercial fisheries, and the continuation of livestock grazing, Assateague Village was established during the 1800's to the northeast of the lighthouse. The population grew to 225 by the turn of the century and supported a school, dry goods store, and churches.

By 1915, there were 25 to 30 families in Assateague Village, not including the lighthouse keepers and their households. The village's decline began about 1922, after Dr. Samuel B. Fields of Baltimore acquired most of the land on the Virginia portion of Assateague Island. Fields had his land east of the village fenced and posted. His overseer, Oliphant, who lived in a bungalow across the road from the old Life-Saving Station, refused to permit the villagers to cross Field's property to get to Toms Cove. With their access to the cove cut off, the villagers began to move off the island. Their houses were jacked up, placed on skids, and taken to the waterfront. There they were placed on barges and floated across Assateague Channel to be relocated on Chincoteague Island. The last person to leave the village was Bill Scott, who had operated the village's one general store. Today the village site is marked only by some building foundations and a cemetery.

In 1965, the National Park Service established Assateague Island National Seashore to provide recreation opportunities to the public on the Maryland side of Assateague Island. While our refuge continued to own and manage the land in the Virginia portion of the island, the seashore took over ownership of the waters surrounding all of Assateague Island from the high to low tide lines. At the same time beach recreation was increasing on both sides of the island. This presented a challenge, since our refuge was established is to prove a sanctuary for migratory and beach nesting birds. Although we also offer wildlife dependent recreation, swimming and other popular beach activities are not compatible with this mission.

Fortunately, ​our friends at Assateague Island National Seashore have a mission that focuses on preserving public lands for outdoor recreation. So, in 1979 we entered into an agreement with the seashore to designate an area of our refuge where they could provide our visitors with a high quality beach experience. Since both agencies share a conservation priority, we work together to ensure that all recreation activities are provided in a manner that minimizes impacts on wildlife resources.

To this day, beach goers benefit from the hard work of our National Park Service partners. They maintain all beach facilities and provide crucial safety services, such as lifeguards and law enforcement during the busy summer season. They also provide interpretive and educational programming to our visitors and school groups year round.

Stop by Toms Cove Visitor Center, located next to the beach in Virginia, to enjoy their exhibits and learn more about Assateague Island National Seashore. If you need to contact them please call (757) 336-6577 (Virginia side) or (410) 641-1443 (Maryland side).

We are managed as part of the Chincoteague National Wildlife Refuge Complex. Located on the Eastern Shore of Virginia, this group of sites protect similar habitat types and wildlife. This means common management needs can be applied toward a common purpose throughout the Complex.