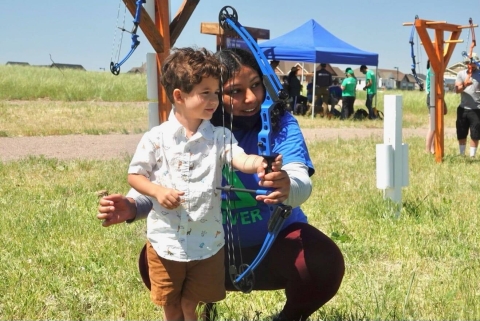 Rocky Mountain Arsenal National Wildlife Refuge welcomes visitors from all walks of life, from near and far, to foster an appreciation for nature. As a flagship urban refuge, we strive to meaningfully engage with our communities and visitors, provide outdoor recreation opportunities to develop and enhance outdoor skills, cultivate a connection with land and wildlife conservation, improve accessibility and connect refuge lands to local communities, and be a community asset. Learn more by watching our video A Refuge For All.

The Refuge offers free, curriculum-based wildlife and conservation education programs for K-7 students. Teachers can take students on a field trip to view and learn about wildlife and habitat year round. Each field trip is grade specific and correlated to Colorado Model Content Standards. For details, click on the School Programs link on the left navigation bar. 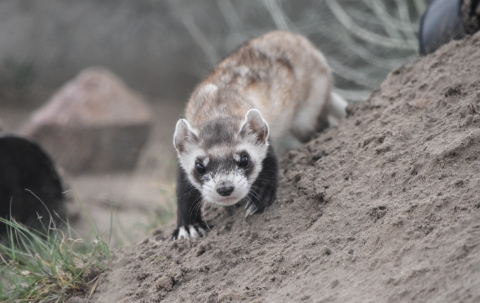 Balancing an ecosystem for more than 330 species of wildlife is a delicate act. Especially when re-introducing an endangered species. In 2015, America’s most endangered mammal, the black-footed ferret, was reintroduced to the Refuge. With the site’s abundant black-tailed prairie dog population, which is the ferret’s main food source, it was a natural location for reintroduction. Twice a year, staff conduct ferret surveys to determine how well they are surviving and reproducing in the wild. Nighttime spotlighting is used to catch these nocturnal animals while they are hunting for prairie dogs. The spotlights catch their distinctive green eye shine. After tracking a ferret, a ring reader is placed over a prairie dog hole, which reads a microchip identifying each individual ferret as it peeks out of a prairie dog burrow. 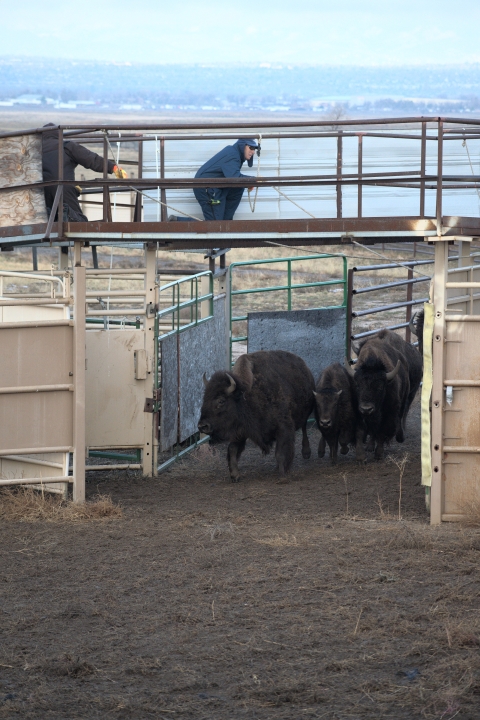 Bison were introduced to the Refuge in 2007 to help sustain prairie grasses. These strong and powerful animals are an icon of the west and the short grass prairie. Each year staff conducts a bison roundup for their health “check-up”. They are moved to the Refuge corral located northwest of the main entrance, which can be seen from the Wildlife Drive. The bison roundup also assists Refuge managers in moving bison around to other national wildlife refuges and conservation herds to sustain a diverse gene pool.

Disturbance of the prairie through decades of homesteader farming followed by U.S. Army weapons manufacturing to support war-time efforts led to degraded wildlife habitats. The discovery of roosting bald eagles led to legislation in 1992 that turned this site into a national wildlife refuge national wildlife refuge
A national wildlife refuge is typically a contiguous area of land and water managed by the U.S. Fish and Wildlife Service  for the conservation and, where appropriate, restoration of fish, wildlife and plant resources and their habitats for the benefit of present and future generations of Americans.

Learn more about national wildlife refuge . Since then, Refuge staff has been diligently working to restore 11,000 acres of native grasslands and remove non-native invasive species invasive species
An invasive species is any plant or animal that has spread or been introduced into a new area where they are, or could, cause harm to the environment, economy, or human, animal, or plant health. Their unwelcome presence can destroy ecosystems and cost millions of dollars.

Refuges deploy a host of scientifically sound management tools to address biological challenges. These tools span from active water management to wilderness character monitoring, all aimed at ensuring a balanced conservation approach to benefit both wildlife and people.  At this field station, our conservation toolbox includes:

At this field station we offer the following public services by appointment:

Please call the Visitor Center at 303-289-0930 for details and to schedule an appointment. Please note the Visitor Center is closed on Mondays and Tuesdays. All passes and permits sales are cash and check only; sorry, we cannot process debit or credit cards.

Refuge law enforcement is an integral part of protecting the people, property, and natural resources within the National Wildlife Refuge System. Federal wildlife officers combine the roles of conservation protection, traditional policing, emergency first response, and wildfire response to protect, serve, and educate the visiting public on the conservation efforts and the rules and regulations to protect wildlife and habitats. These roles are accomplished through partnership and trust of the public and cooperative efforts of other federal, state, and local agencies.

Visitor safety and wildlife conservation are top priorities at the Colorado Front Range National Wildlife Refuge Complex. At times, sections of the Refuges may be closed on short notice due to wildlife needs, weather, or special projects. The Refuges are subject to federal, state, and local laws and regulations. To help make your visit safe and enjoyable, please visit the Laws and Regulations link below for details about how to enjoy and recreate responsibly at the Refuge. You can also call the Visitor Center at 303-289-0930 or monitor the website for current hours of operation and alerts before visiting.