In the spring, the Refuge’s woodlands are visited by Bullock’s orioles, warblers, finches, and other migrating songbirds. Among the open grasslands, western meadowlarks and kingbirds are plentiful, and mountain bluebirds race through on their way to the foothills west of Denver. Cinnamon-colored bison calves frolic around their mothers. Great blue herons, American avocets, and snowy egrets wade in the shallows around ponds and lakes. Swainson’s hawks, lark buntings, and yellow-headed blackbirds make their annual appearance. Prairie dog pups and black-footed ferret kits venture out of their burrows, fawns emerge from locust thickets, and loud begging calls of black-billed magpie chicks come from their enormous stick nests. 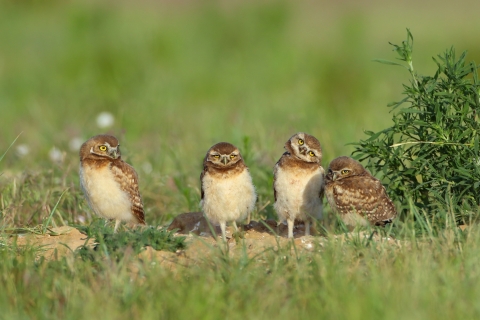 Summer brings fields of prairie grasses dotted with colorful wildflowers in full bloom. White pelicans coordinate their swimming to drive fish into shallow water for a quick group meal. Burrowing owls nest and raise their young in unoccupied prairie dog burrows. While bullsnakes are commonly seen on dry land, chorus frogs and painted turtles can be found around the wetlands. Known for being one of the best warm-water fisheries in Colorado, Refuge lakes hold bluegill, largemouth bass, and lunker northern pike.

In the fall, coyotes are well-camouflaged among the rust and golden-colored grasses as they hunt from the edges of prairie dog towns. Mule and white-tailed deer bucks display their impressive antlers as they compete for does. Refuge lakes provide a haven for migrating waterfowl such as northern pintails, northern shovelers, redheads, and ring-necked ducks. Silhouettes of great horned owls may be seen perched close to tree trunks after the leaves have fallen. Sandhill cranes announce their brief visit on their migration to the south. 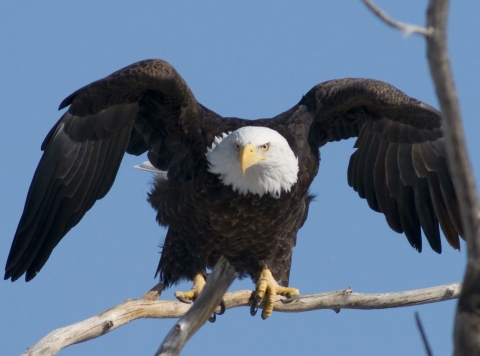 Winter brings a blanket of snow covering the prairie making prey highly visible to predators, including ferruginous hawks and other raptors, which are attracted to the Refuge’s large population of cottontail rabbits and black-tailed prairie dogs. Numerous bald eagles migrating from the north seek nightly shelter in the massive cottonwood trees lining the lake edges. A nesting pair of bald eagles that reside at the Refuge year-round begin tending to their nest in preparation of laying eggs that will hatch in late March. Snow-frosted faces of bison can be seen on blustery winter days. Small mammals, such as pocket gophers, thirteen-lined ground squirrels, and kangaroo rats are in hibernation underground.

The Refuge has more than 330 species of mammals, birds, reptiles, amphibians, and fish. Each season brings a new opportunity to discover and view wildlife.