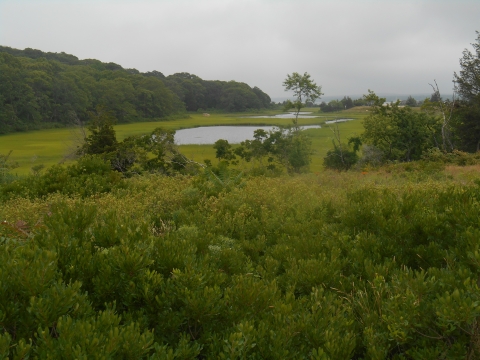 The refuge preserves and maintains one of the best examples of maritime grassland remaining on Long Island. The grassland is dominated by little bluestem, with lesser amounts of Indian grass, poverty grass, and prickly pear cactus. The tidal wetlands provide habitat important for black ducks and a host of other waterbirds. Management activities are geared toward maintaining native grassland, controlling invasive species invasive species
An invasive species is any plant or animal that has spread or been introduced into a new area where they are, or could, cause harm to the environment, economy, or human, animal, or plant health. Their unwelcome presence can destroy ecosystems and cost millions of dollars.

Maritime grasslands are a globally rare plant community found on outwash plains near oceans or bays. Fewer than 100 maritime grasslands are found worldwide. Since 1989, the State-listed coast flatsedge and bushy rockrose have been recorded at the refuge. Historically, several other listed plants associated with maritime grasslands were known there. The rarity of the maritime grassland habitat type on Long Island is due partly to the rapidity which the vegetation succeeds into maritime shrubland and the absence of disturbance, e.g. fire, to reduce the spread of woody vegetation. 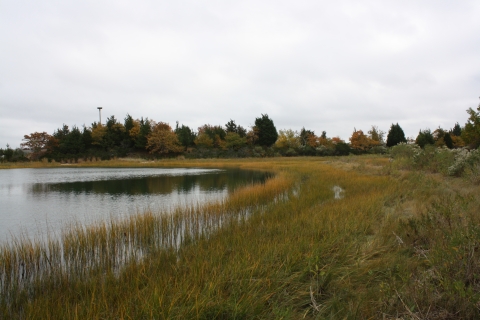 Conscience Point is part of a unique wetland network: the Sebonac Creek/West Neck/Scallop Pond System or, in local vernacular, the Cow Neck Complex. That system encompasses about 300 acres of open water, salt marsh salt marsh
Salt marshes are found in tidal areas near the coast, where freshwater mixes with saltwater.

The extensive salt and brackish tidal marshes include a number of tidal creeks, ponds and coves. The marshes characteristically comprise low and high marsh areas dominated by smooth cordgrass and saltmeadow cordgrass, respectively, with various admixtures of glasswort, spikegrass, black grass, and sea lavender, among others. Their upland shrubby edges often are dominated by groundselbush, marsh elder and bayberry, grading into upland forest of red maple and white oak.

The purpose of Conscience Point is as follows: