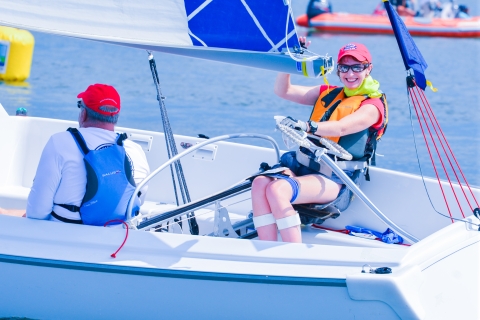 The Congressman Lester Wolff Oyster Bay National Wildlife Refuge is located on the north shore of Long Island in eastern Nassau County in the Town of Oyster Bay. It is 20 miles east of New York City and 5 miles west of Target Rock National Wildlife Refuge. The major refuge holdings are in Oyster Bay Harbor and the western portion of Cold Spring Harbor. The waters of Oyster Bay surround Sagamore Hill National Historic Site, home of Theodore Roosevelt, the founder of the first national wildlife refuge national wildlife refuge
A national wildlife refuge is typically a contiguous area of land and water managed by the U.S. Fish and Wildlife Service  for the conservation and, where appropriate, restoration of fish, wildlife and plant resources and their habitats for the benefit of present and future generations of Americans.

The Congressman Lester Wolff Oyster Bay National Wildlife Refuge is located on the north shore of eastern Nassau County and is only accessible by boat. This 3,209-acre area includes bay, salt marsh salt marsh
Salt marshes are found in tidal areas near the coast, where freshwater mixes with saltwater.

Learn more about salt marsh and freshwater wetlands, and is especially important for wintering waterfowl and a variety of waterbirds. The refuge waters are open 24 hours a day. Contact the Town of Oyster Bay for mooring and boat launch information. 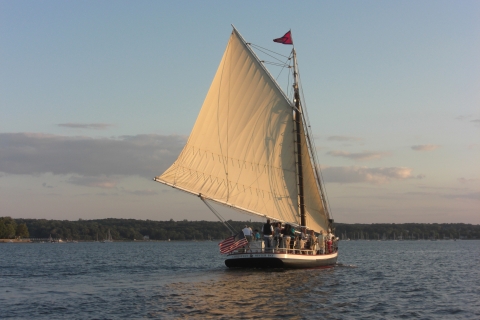 The Congressman Lester Wolff Oyster Bay National Wildlife Refuge was donated to the Service by the Town of Oyster Bay in 1968 as a habitat for migratory birds, particularly wintering waterfowl. The refuge is unique in the System, serving as a marine refuge rather than the more traditional terrestrial refuge; it comprises the waters and marshes of Oyster Bay and Cold Spring harbors. This refuge is open to the public.

The refuge is located on the north shore of Long Island in eastern Nassau County. This 3,209-acre refuge includes subtidal (bay bottom to mean high tide line) habitats, saltmarsh and a freshwater pond. The refuge is the largest refuge in the Long Island National Wildlife Refuge Complex and receives the most public use of all the refuges. The state of New York designated this refuge as a significant coastal fish and wildlife habitat. The refuge is especially important for wintering waterfowl such as black ducks, greater scaup, bufflehead, canvasback and long-tailed ducks. A variety of other waterbirds including shorebirds, terns and cormorants also use the refuge. Other marine organisms common to the refuge include northern diamondback terrapins, harbor seals, sea turtles, finfish and shellfish. Management activities include wetland restoration and protection of the natural shoreline and vegetation. Fishing (Town of Oyster Bay permits required for shell fishing), wildlife observation, photography and environmental education are approved recreational uses on the refuge. 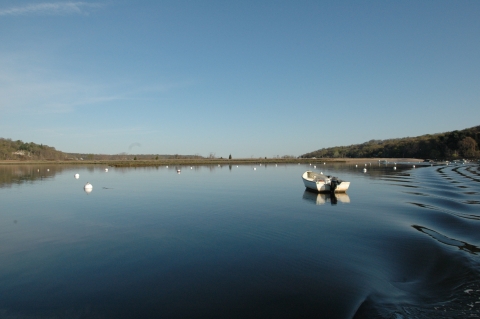 Learn more about salt marsh , and a small freshwater wetland. It is managed principally for use by migratory waterfowl and other waterbirds. It is also one of the few bay-bottom refuges owned and managed by the U.S. Fish and Wildlife Service. The refuge is located off Long Island Sound, and the sheltered nature of the bay makes it extremely attractive as winter habitat for a variety of waterfowl species, especially diving ducks.

The State of New York has designated the Oyster Bay area as a Significant Coastal Fish and Wildlife Habitat. Marine wildlife common to the refuge includes harbor seals, diamondback terrapins, and several species of sea turtles. Shellfish and finfish are abundant at Oyster Bay. The bay supports the only commercial oyster farm aquaculture operation remaining on Long Island, and an estimated 90 percent of the commercial oysters in New York originate from areas associated with the refuge. 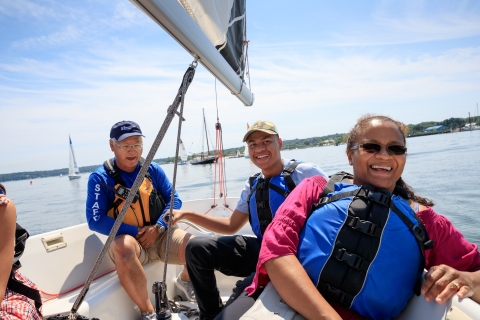 The Congressman Lester Wolff Oyster Bay National Wildlife Refuge was donated to the Service by the Town of Oyster Bay in 1968 as a habitat for migratory birds, particularly wintering waterfowl. The refuge, totaling 3,204 acres from the bay bottom up to mean high water, is located on the north shore of Long Island. The refuge is unique in the National Wildlife Refuge System, serving as a marine refuge rather than the more traditional terrestrial refuge; it comprises the waters and marshes of Oyster Bay and Cold Spring harbors. This refuge is open to the public. 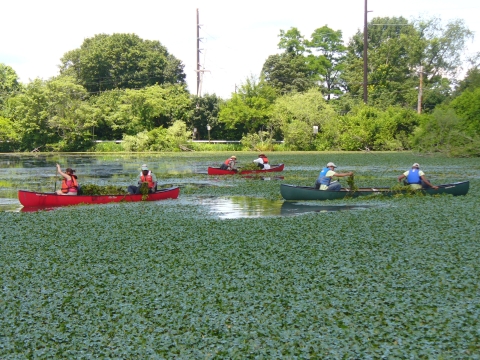 Water chestnut was the main invasive species invasive species
An invasive species is any plant or animal that has spread or been introduced into a new area where they are, or could, cause harm to the environment, economy, or human, animal, or plant health. Their unwelcome presence can destroy ecosystems and cost millions of dollars.

Learn more about invasive species within Mill Pond. After years of hand pulling by refuge staff and volunteers, the pond is now free of this invasive plant. 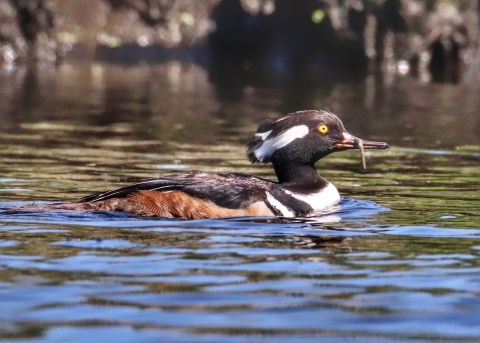 Oyster Bay has the greatest winter waterfowl use of any of the Long Island national wildlife refuges. The numbers of waterfowl using Oyster Bay are lowest from May through August, and start to increase in September and October. Puddle ducks such as black ducks, gadwall, and mallards start migrating to the refuge in early autumn, and their diversity begins to increase in November. Waterfowl numbers peak and remain high from December through March, then decline in April.

The New York Department of State has singled out Oyster Bay as having the greatest concentration of waterfowl on Long Island’s north shore.

The three waterfowl species that most commonly use the refuge in winter include the greater scaup, bufflehead, and black duck. Those species compose approximately 85 percent of all ducks using the refuge. Greater scaup compose more than half; bufflehead make up 20 percent; and black duck, the most common puddle duck species, close to 10 percent.

Waterfowl use is not uniform across the refuge. The Bayville, Cold Spring Harbor, and Mill Neck Creek areas support in excess of 80 percent of that use. Bayville alone accounts for nearly half. The majority of the greater scaup and bufflehead on the refuge use its Bayville and Cold Spring Harbor sections, while the Mill Neck Creek section had the greatest use by black duck and canvasback. 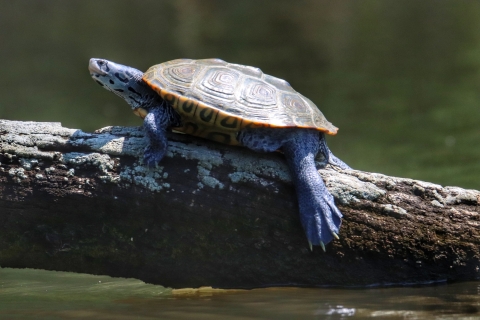