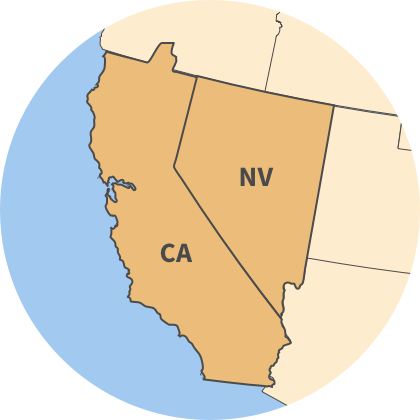 Overview of the Region

The U.S. Fish and Wildlife Service Region 8 is headquartered in Sacramento, California, and has federal fish and wildlife management responsibilities in California, Nevada, and the Klamath Basin in southern Oregon. The Region includes one of the most ecologically diverse areas in the United States, ranging from the arid sand dunes in the Mojave Desert to the snow-capped crags in the high Sierras; from rich farmland in the Central Valley to rain-soaked redwood forests along the Pacific coast. This highly diverse geography provides habitats for a vast array of wildlife. More than 42 million people live within the Region, and expanding population centers such as San Francisco Bay Area, Los Angeles, Reno, San Diego, and Las Vegas are increasing demands on natural resources, presenting unique challenges to the Region’s conservation mission.

A big step to recover a tiny California fish
Malibu, California— Found exclusively in California, the endangered tidewater goby (Eucyclogobius newberryi) is a tiny grey-brown fish rarely exceeding two inches in length and whose brief lifespan provides no shortage of challenges and threats to its survival. The fish has been listed as...
Story
Wildlife Management

U.S. Fish and Wildlife Service seeks public comment on Environmental Assessment for PG&E’s Potter Valley Project Bald Eagle Nest Removal Permit application
The U.S. Fish and Wildlife Service received an eagle nest removal application from the Pacific Gas and Electric Company under the Bald and Golden Eagle Protection Act. The Service prepared an Environmental Assessment to assess the impacts of nest removal, which resulted in a Finding of No...
Press Release

Tiehm’s buckwheat listed as an endangered species; critical habitat designated in Nevada
RENO, Nev. — The U.S. Fish and Wildlife Service is publishing its final rule listing Tiehm’s buckwheat as an endangered species under the Endangered Species Act. The Service is also designating 910 acres of critical habitat on lands managed by the Bureau of Land Management in the Rhyolite Ridge...
Press Release

Surveying, monitoring and frogs - A behind the scenes look at data collection
Starting in 2004, biologists and volunteers with the state and federal agencies, and the University of Nevada Reno, have ventured into the Nevada desert every year to capture frogs.
Story
Science and Technology

Service lists Dixie Valley toad, found only in Nevada, as endangered
Following a review of the best available scientific information, the U.S. Fish and Wildlife Service has determined the Dixie Valley toad is at risk of extinction and is listing the species as endangered under the Endangered Species Act, continuing the protections applied to the toad in the...
Press Release

Conservation Corner
Kern National Wildlife Refuge (Kern NWR) is known for its incredible birding opportunities, but visitors may someday soon be able to get a glimpse of a San Joaquin kit fox. For the first time since 2007, a kit fox has been seen on the refuge, and what’s more, there are signs the fox may be denning...
Story
Wildlife Wonders