Pablo NWR is superimposed on a reservoir that contains about 1,850 acres of water at full pool level. The Flathead Irrigation Project manages the reservoir for irrigation and flood control. The Service partnered with Ducks Unlimited to create a series of ponds along the west edge of the Refuge for waterfowl. It was here that the initial release of Trumpeter Swans occurred in 1996 as part of a reintroduction project initiated by the Confederated Salish and Kootenai Tribes.

The Refuge consists of 692 acres of upland habitat in a narrow band around the reservoir. While small, it provides home for upland nesting birds, such as the long-billed curlew, pictured above. Snowy owls hunt these fields when, and if, they invade from the north during the winter. 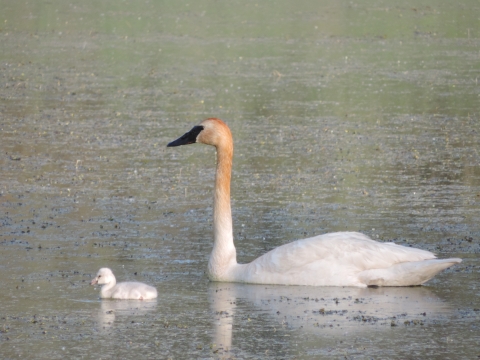 The wetland habitat supports abundant waterfowl species such as mallards, northern shovelers, gadwalls, redheads and ruddy ducks. Other birds include song sparrows, yellow–headed and red–winged blackbirds, and ring–necked pheasants. Bald eagles have nested here. The Confederated Salish and Kootenai Tribes successfully introduced Trumpeter Swans (Cygnus buccinators) into the Mission Valley in cooperation with the US Fish and Wildlife Service, Montana Fish, Wildlife and Parks and other entities. Nineteen swans were released at Pablo National Wildlife Refuge in 1996 and the swans are now established in the valley and breed yearly.

The ponds on the west side, created in partnership with Ducks Unlimited, provide breeding, feeding and resting areas for numerous waterfowl and waterbirds. This is where trumpeter swans were released during the initial reintroduction by the Confederated Salish and Kootenai Tribes in 1996 and continues to be an important release site.  Swans use the area for feeding and resting. Read about their success here.

Waterfowl numbers vary through the year, with concentrations in spring and fall. Spring migration is at a peak from late March to early May, with waves of different species coming through at different times. A group of migrating tundra swans or snow geese will sometimes rest for a few days at the Refuge. Fall populations often peak in early October to late November. Waterfowl typically nest from April until July. Spotting scopes with tripods or window mounts are suggested to bring in views of distant birds on the water.

In addition, the Refuge contains stands of large cottonwoods and thick willow brush along the roads, providing habitat for a variety of neotropical migrants. Bird watchers and photographers should look for yellow and common yellowthroat warblers along with willow flycatchers in these thickets. Cliff swallows can be found nesting along the dam. Year-round residents include the abundant black-billed magpie, northern flickers, ring-necked pheasants, and American kestrels.

Bald eagles have nested on the Refuge so watch for adults and their dark juveniles. Rough legged hawks migrate from Canada for the winter and hunt the fields surrounding the Refuge. The area can also receive periodic winter-time visits from snowy owls. Typically there is at least one snowy owl in the area but winter populations have reached into the 30s in highly irruptive years.

Please remember you are visitors to the Refuge and restrain from disturbing wildlife. Do no use electronic or game calls, including bird calls, which can cause stress on animals as well as disrupt opportunities for other visitors.

Since most of Pablo National Wildlife Refuge is composed of open water, resident animals include those dependent on, and able to live with, water. Common mammals include muskrat (photo left), striped skunk, mink, field mice, and meadow voles. While small, they can be very important. For example, muskrats make “push ups” of mud and marsh vegetation for dwellings and geese and swans frequently use the tops as nesting sites. Mice and voles provide a food source for summer nesting northern harriers and for wintering rough-legged hawks and snowy owls.

The trumpeter swan is a majestic bird, with snowy white feathers; jet-black bill, feet, and legs; and 8-foot wingspan. At close range, a thin orange-red line can be seen on the lower part of the bill. The trumpeter is often confused with the smaller, more northerly tundra swan, especially where...