Invasive Species Program staff collaborate with Alaska's National Wildlife Refuge, the State of Alaska and other partners to protect Alaska's lands and waters by working to detect invasive species invasive species
An invasive species is any plant or animal that has spread or been introduced into a new area where they are, or could, cause harm to the environment, economy, or human, animal, or plant health. Their unwelcome presence can destroy ecosystems and cost millions of dollars.

Learn more about invasive species infestations while they’re still relatively small and have the highest chance of being successfully eradicated. We survey terrestrial, freshwater, and marine environments for invasive plants and animals. Survey methods include activities such as raking lakes for the submerged aquatic plant Elodea, surveying roads for invasive plants like white sweetclover or orange hawkweed, and setting traps for invasive green crabs.

Data from early detection surveys are entered into databases such as the Alaska Exotic Plants Information Clearinghouse. Anybody can help with early detection efforts by reporting plants or animals that you may be unfamiliar with to 1-877-INVASIV, ADF&G Online Reporter, or via the Alaska Invasives ID app.

Invasive Species
Invasive species are non-native plants, animals and other living organisms that thrive in areas where they don’t naturally live and cause (or are likely to cause) economic or environmental harm, or harm to human, animal or plant health. Invasive species degrade, change or displace native habitats,...
Program

Kanuti National Wildlife Refuge
The Athabascan name for Kanuti is "Kk'toonootne" which translates to "well traveled river by both man and animals." Kanuti Refuge is about the size of the state of Delaware and straddles the Arctic Circle, with approximately a third of the Refuge above the Circle and two-thirds below it. Kanuti...
National Wildlife Refuge
Fairbanks, AK

Nowitna National Wildlife Refuge
Winding across the refuge, the Nowitna River forms a broad floodplain that comes alive each spring with the arrival of thousands of migratory songbirds and waterfowl. The river passes through a scenic 15 mile canyon with peaks up to 2,100 feet. Whether you come to fish, hunt, or just enjoy the...
National Wildlife Refuge
Galena, AK

Alaska Department of Fish and Game 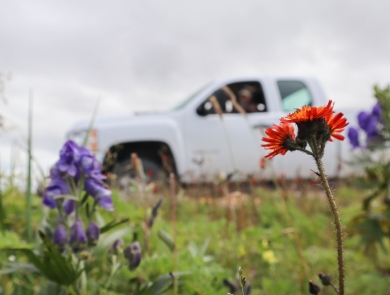 Habitat Restoration
Alaskans: plant this, not that
It’s never too early to start thinking about what to plant in your garden, yard, or apartment balcony. But have you considered if what you’re planting helps or hurts your neighborhood wildlife? Is it an invasive species? Here are five plants to avoid and the beautiful alternatives that you can...
Apr 28, 2022