Dale Bumpers White River National Wildlife Refuge – What is now the refuge housed one of the 143 segregated Civilian Conservation Corps (CCC) camps from 1936-1941. Even though segregated, African American workers received the same pay and benefits as other CCC workers. White River was the only CCC camp that was a floating camp where CCC enrollees operated former Corps of Engineers’ quarterboats throughout the rivers surrounding the refuge. This was the easiest way for the CCC enrollees to maneuver over the refuge and have access to areas inaccessible by land.

Lape-Read House (Salt Meadow) at Stewart B. McKinney National Wildlife Refuge – The home of Esther Lape and her partner Elizabeth Read was frequented by Eleanor Roosevelt as early as the 1920s when the three first met, and the visits continued even during Roosevelt’s time as First Lady. Many of the discussions at the home centered on women’s rights and desegregation. The refuge interprets the Lape-Read House for visitors.

St. Marks National Wildlife Refuge — The refuge was home to a segregated CCC camp from 1933-1942. The enrollees worked on various improvements to the refuge under the auspices of the Bureau of Biological Survey (from 1940 on, the Fish and Wildlife Service). The camp was briefly closed in 1934 because of a malaria outbreak and then relocated near Woodville, Florida. Camp workers made a number of improvements at the refuge, including constructing Lighthouse Road, building earthen levees to create large water impoundments for waterfowl and clearing more than 20 miles of firebreaks.  As part of its Lighthouse interpretation, the refuge talks about CCC history.

Later, in 1942, the federal government bought up thousands of acres in this coastal spot south of Savannah to make an Army airfield. In doing so, it displaced an African American community. The land eventually became a refuge, but the land’s ownership has been a point of contention and friction for years. In recent years, the Service, wanting to strengthen relations with its Harris Neck neighbors, has reached out to former residents. Both sides are working to ensure Harris Neck more fully recognizes the community that thrived there for years.

Blackwater National Wildlife Refuge — The birthplace of abolitionist Harriet Tubman, who risked her life repeatedly to lead dozens of enslaved people to freedom, received added national attention in 2021. That year, archaeologists discovered the site of the Tubman family cabin on a piece of land recently acquired by the refuge. A coin and ceramic fragments dating from 1820 to 1840 were found where the cabin once stood.

Holt Collier National Wildlife Refuge – The refuge commemorates African American conservation efforts. As a youth, Holt Collier became a skilled tracker and hunter. He was a local celebrity and even organized a hunting trip for President Theodore Roosevelt, who called Collier the best tracker he had ever known. It was Collier and his trackers who located and held a bear for the president, who then refused to shoot a restrained animal. The event was the birth of the Teddy’s bear story. Collier remained a figure of importance in the community.

Ernest F. Hollings ACE Basin National Wildlife Refuge — A Civil War-era plantation that now serves as refuge headquarters and the visitor center, Jehossee was owned by the William Atkins family until acquired by the Service. It has extensive ruins of slave quarters, a number of which later were used by the plantation's African American tenants. At The Grove Plantation House, which was owned by John Berkeley Grimball, Adam Deas (one of his former slaves) grew rice more successfully than contracted "white" hands. Deas lived in the nearby Willtown community, an African American community that is still present.

Waccamaw National Wildlife Refuge – Evidence, in the form of original maps and photographs showing houses and demarcating the extent of land for the community along with remains of house foundations and roads, documents the presence of original and current Gullah Geechee (freed Creole communities) descendants.

Great Dismal Swamp National Wildlife Refuge – The swamp served as a “safe” area on the Underground Railroad, meaning escaped slaves could hide and rest before continuing their trek or even stay and live in the small but thriving community that found a home deep inside the swamp. The history and archaeology of these communities is well-documented and refuge staff share the story.

Venture Smith Homestead at Silvio O. Conte National Fish & Wildlife Refuge –After 30 years of slavery, Venture Smith purchased his own freedom in 1765 for 70 pounds and 3 shillings. He subsequently purchased his remaining family’s freedom and soon after settled on land that is now within the Salmon River Division of Conte Refuge. At his death, Smith owned more than 100 acres, three homes and several profitable businesses. 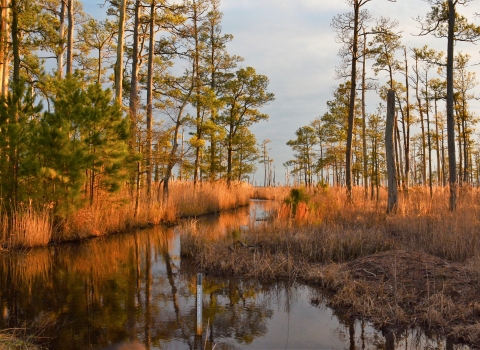