Image Details
What does it mean to be a lone wolf?

Every year, individual wolves across America leave the pack they were born into (called a “natal pack”) and go solo, becoming a “lone wolf” in the wild. While some may think it’s a brave choice—one reserved for the truly independent—a wild wolf’s decision to leave a pack and strike out alone is quite common. Known as “dispersing,” this is how wolves find mates and form new packs.

To understand why and when a wolf leaves its pack, it’s important to understand a few basics about pack dynamics in the wild.

All in the family

A wolf pack is essentially a family unit. There is a breeding pair (one male and one female) who are in charge. The rest of the pack is made up of their offspring—including new pups, yearlings and subadults. Occasionally, a dispersing wolf from another pack will join an existing pack. This most often occurs when either the breeding male or female dies, and a new partner is needed.

The family dynamic of a pack allows young wolves to learn how to survive in the wild from their parents and siblings. As part of a pack, wolves learn to hunt, avoid danger, and defend themselves.

A wolf pack can vary in size from only two breeding adults up to a multigenerational group containing 10 or more wolves.

As wolf pups age and grow, they venture farther and farther out from their den. By the time they reach six months of age, the young wolves are big enough to travel widely with their pack and assist with hunting elk and deer. By the time juvenile wolves reach 1.5 to 2 years of age they are fully grown and capable of hunting large prey on their own.

Should I stay or should I go?

Wolves reach breeding age at around age 2. Because there is usually only one breeding pair in each pack, a wolf at this age who is ready to find a mate must leave its natal pack.

The decision to leave, however, is not an easy one. Finding food without the help of a pack to hunt is challenging. There is no guarantee of finding a mate. And there’s safety in pack numbers.

“Until dispersal, a wolf lives its entire life in the pack’s territory,” says Colby Gardner, a wolf biologist with the U.S. Fish and Wildlife Service. “This territory is all the wolf has ever known. Leaving a natal pack is much like leaving one’s hometown. It means venturing into new places, which brings new threats like roads, other packs and people.”

The life of a lone wolf is difficult and sometimes dangerous. Yet, the health of wild wolf populations depends on wolves dispersing, finding mates, starting new packs and spreading to new territories.

Looking for the one

While wolves have been documented dispersing throughout the year, fall and winter are the most common times for it to occur since breeding happens in the late winter.

Once a wolf disperses, it spends its days foraging for food and looking for a partner.

A primary method for finding a mate is through howling. Wolves can hear each other howl over distances of 6 miles in the wild depending on terrain.

Wolves also use their keen sense of smell to find a partner. The information a wolf can glean from a single sniff of another wolf’s urine or scat (poop) is truly amazing - they can learn the gender, diet, social rank, and breeding condition of another wolf by smell alone. Wolves can also tell how recently the scent was left, which helps them track each other across the landscape.

The distance a dispersing wolf must travel, and the time it takes for a wolf to find a new mate, vary greatly. It can be influenced by the number of dispersal-aged wolves in the area’s population.

For the lucky ones, they find a mate and form a new pack. It may take several years for a new pair of wolves to successfully reproduce in the wild. Once they do, their pack can continue to grow, and the cycle repeats itself. 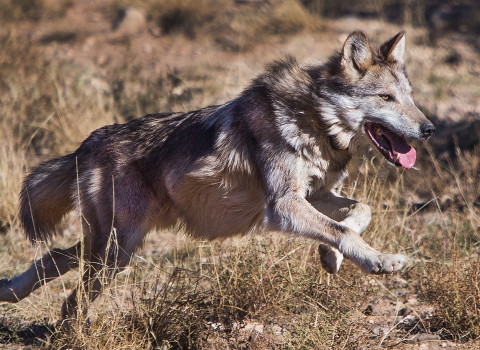 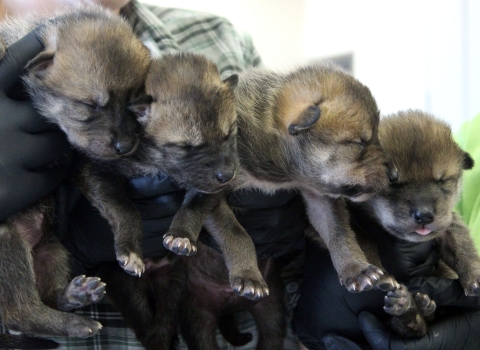