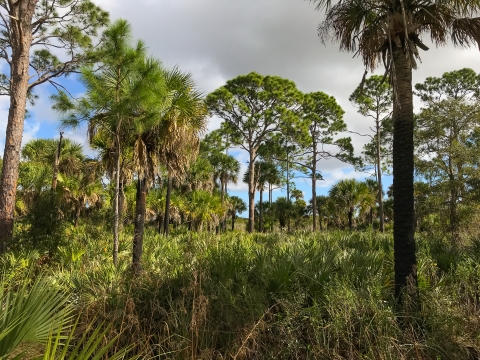 St. Johns NWR was established on August 16, 1971, to provide habitat for threatened and endangered species, specifically for the conservation of the dusky seaside sparrow (Ammodramus maritimus nigrescens).  By 1979, surveys determined that the dusky seaside sparrow had declined to less than 20 male birds.  The last known sighting of this species in the wild was in 1980.  Despite the loss of the dusky seaside sparrow, at least 19 federal and state-listed species and species of management concern are known to occur today at St. Johns NWR.  These include four federally listed wildlife species listed as threatened: the wood stork (Mycteria americana) crested caracara (Caracara cheriway) eastern indigo snake (Drymarchon couperi) and the recently listed eastern black rail (Laterallus jamaicensis jamaicensis).

The St. Johns NWR is managed by staff from Merritt Island NWR. Due to the presence of sensitive bird nesting habitat, and the lack of facilities, the refuge is not open to the public.

The primary purpose of the refuge relates to threatened and endangered species and applies to all lands and waters managed as part of St. Johns NWR:   “…to conserve (A) fish or wildlife, which are listed as endangered species or threatened species…or (B) plants…”  (16 U.S.C. 1534, Endangered Species Act).  A secondary purpose focuses more on native diversity and also applies to a few tracts:  “…conservation, management, and restoration of the fish, wildlife, and plant resources and their habitats for the benefit of present and future generations of Americans…” 16 U.S.C. 668dd(a)(2), National Wildlife Refuge System Administration Act.

Archaeological evidence suggests that the St. Johns River basin, which includes the refuge, has been inhabited for over 12,000 years. At the end of the last glacial period, when the climate was much cooler and drier, nomadic Paleo-Indians congregated around scarce fresh water resources. These hunter-gatherers may have taken advantage of megafauna that inhabited Florida at the time, but they primarily subsisted on small game, fish, and foraged nuts, berries and tubers. With the retreat of glaciers in the north of the continent, sea levels rose, and the climate became warmer and wetter. With greater availability of fresh water resources, populations expanded and started to occupy more of the landscape. During this period, Florida’s megafauna disappeared and native inhabitants began to make greater use of abundant coastal resources (fish and shellfish) and established permanent settlements. Their descendants diversified into distinct tribes, including the Ais and the Timucuans, who lived along the shores of the Indian River and Mosquito Lagoons. The huge shell middens they left behind are testament to their dependence on the Indian River Lagoon shellfishery. Timucuans still occupied the area when the first Europeans arrived in the 16th century.

Until the 1830’s, what would become Brevard County was almost exclusively inhabited by the Seminole Indians. As the Second Seminole War (1835-1842) ground to a stalemate, settlers began to trickle into the region and by the 1850s, a small community emerged in the vicinity of present day Titusville. The region remained sparsely settled through the middle of the 19th century, but following the American Civil War, settlement increased. By the 1890s, railroad transportation had arrived in Brevard County, which improved transportation, bringing more settlers as well as winter tourists. Commercial fishing, citrus, agriculture, resort tourism, and a variety of smaller industries continued to fuel the area’s growth until after World War II. With the arrival of the Cold War and the Space Race, and the establishment of the Cape Canaveral Air Force Station and the Kennedy Space Center, the population (and development) exploded on the east coast of Florida. 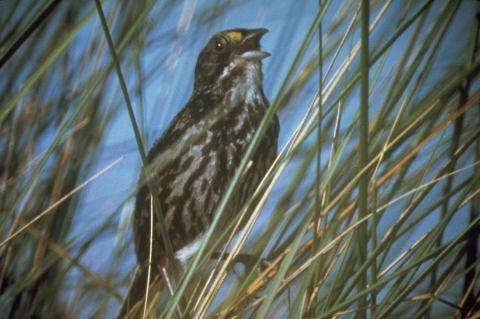 The establishment of St. Johns NWR was in response to a serious decline of the dusky seaside sparrow (Ammodramus maritimus nigrescens). Although the species was first described from specimens from St. Johns River marshes in 1872, the area was long ignored, as the birds were abundant on Merritt Island’s salt marshes. However, in part due to the impounding of salt marsh salt marsh
Salt marshes are found in tidal areas near the coast, where freshwater mixes with saltwater.

Learn more about salt marsh on Merritt Island for mosquito control in the late 1950s and early 1960s, the population of duskies precipitously declined. Where there had been hundreds of sparrows, there were now only a handful.  In 1967, the species was formally listed as endangered. In the spring of 1968, a census of the St. Johns River’s marshes revealed the presence of an estimated 894 males.

After the creation of the refuge in 1971, the Service began management activities. Field studies included vegetation mapping and color banding of individual sparrows. It was determined that the territory of each nesting pair was approximately 1.3 acres and that only 400 acres of habitat within the acquisition boundary was in optimal condition. Management actions during the ensuing years included restoring natural water flow to the marsh, controlling woody vegetation and implementing a formal fire management program. On Merritt Island NWR, dikes were removed from impounded marsh in an attempt to restore dusky seaside sparrow habitat.

Despite efforts to restore habitat, dusky seaside sparrow populations dropped precipitously. In 1970, surveys detected 143 singing males, but by 1974, only 37 males were detected, and no females had been documented since 1975. The last known sighting of a dusky seaside sparrow in the wild was in 1980. Ultimately the species was declared extinct in 1990.