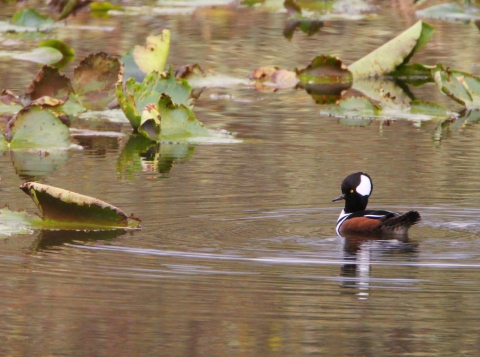 Established in 1991 with a donation of 46 acres of tidal salt marsh salt marsh
Salt marshes are found in tidal areas near the coast, where freshwater mixes with saltwater.

The Refuge protects high quality coastal wetlands and uplands next to Siletz Bay from encroaching development and enhances habitat for a variety of birds and mammals. The river, bay and estuary habitats at Siletz Bay NWR supports large runs of anadromous fish including Chinook and Coho salmon, Cutthroat Trout, and Steelhead Trout. Juvenile salmonids benefit from several tidal marsh restoration projects on the Refuge.

At Siletz Bay National Wildlife Refuge we will preserve in perpetuity a dynamic mixture of tidal marsh, sloughs, mudflats, and forest. The refuge will be a place where salmon and trout find shelter near large woody debris; where birds of prey hunt from perches on starched skeleton trees; and where herons, egrets, and waterfowl safely forage in the tidally influenced waters.

Tidal marshes and woodlands will be restored to their historic conditions and invasive plants will be eradicated whenever they are found. We will work with our conservation partners to apply sound, scientific principles, and adaptive management strategies to sustain the integrity of the estuary in the face of a changing climate. Paddling through the open waters that nourish the refuge, visitors will experience unique opportunities to connect with nature.

Major modifications to Siletz Bay came through sedimentation from human activity, mainly logging and grazing, and by changes to the shoreline. Much of the land around the bay, formerly pastureland, diked against the tides to accommodate dairy cows, is now part of the Siletz Bay National Wildlife Refuge. Established in 1991 with a donation of 46 acres of tidal salt marsh salt marsh
Salt marshes are found in tidal areas near the coast, where freshwater mixes with saltwater.

Learn more about salt marsh , the purpose of this refuge is to protect and enhance estuarine fish and wildlife resources and their habitats.

Now encompassing 568 acres, Siletz Bay features salt marsh, brackish marsh, tidal sloughs, mudflats, and coniferous and deciduous forestland. The refuge provides nursery grounds for Coho and Chinook Salmon, Steelhead and Cutthroat Trout, and other anadromous species. The primary ecological goal for the refuge is to allow the salt marsh to return to its natural state of twice-daily tidal inundation.

A small tidal marsh restoration project was completed by the Refuge in November 2000. In the fall of 2003, another project restored 86 acres of tidal marsh at Millport Slough through a partnership with Ducks Unlimited and the Confederated Tribes of the Siletz Indians. The restoration involved breaching 220 feet of dike, removing two dikes totaling 9,300 feet, and filling 1,200 feet of artificial ditches. Large woody debris was placed in the marsh to improve habitat for anadromous fish.

In 2016, the Refuge completed the restoration of Alder Island by allowing brackish waters to once again flow to the center of the island. This area was then opened to the public in early 2017, for visitors to utilize the newly completed half-mile trail and car-top boat launch. Complex staff continue to complete restoration projects, improve public use, and manage invasive species invasive species
An invasive species is any plant or animal that has spread or been introduced into a new area where they are, or could, cause harm to the environment, economy, or human, animal, or plant health. Their unwelcome presence can destroy ecosystems and cost millions of dollars.

Learn more about invasive species at this National Wildlife Refuge.

What is a Refuge Complex?

A National Wildlife Refuge Complex is a group of two or more refuges, wildlife management areas or other refuge conservation areas that are managed from one central office. Refuges are grouped into a complex because they occur in a similar ecological region, such as a watershed or specific habitat type, and have a related purpose and management needs.

The Oregon Coast National Wildlife Refuge Complex is managed from our headquarters in Newport, Oregon. The office located at Bandon Marsh NWR serves as a south-coast field office.