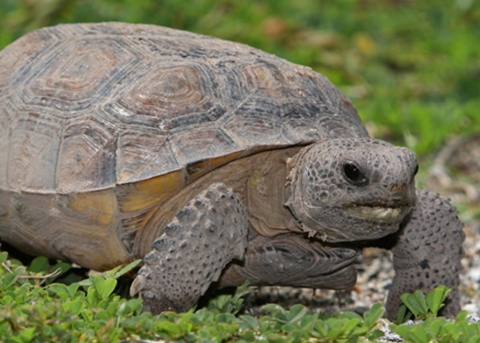 Pelican Island National Wildlife Refuge (NWR) is situated in the Indian River Lagoon estuary, which runs 156 miles down Florida’s eastern coastline. Thousands of species inhabit the brackish Indian River Lagoon, including the federally protected green sea turtle, Florida manatee, and wood stork, as well as state protected threatened species such as the reddish egret and tricolor heron. During spring and fall migration, birds rest and refuel at Pelican Island NWR as they follow the Indian River Lagoon south to the Everglades or to the Caribbean. The upland habitat is also home to gopher tortoises, bobcats and snakes, as well as mangroves, live oaks, and gumbo limbo.

Pelican Island, the nation’s most historic refuge, and the surrounding area was first inhabited by the Ais people between 2000 BCE and the mid-1600. Then, in 1903, President Theodore Roosevelt’s executive order designated the island as the nation’s first national wildlife refuge for the protection of nesting birds. Pelican Island was established as wilderness by Congress in 1970.

Learn more about National Historic Landmark by the Secretary of the Interior in 1963. Thirty years later in 1993, Pelican Island Refuge was recognized by the Ramsar Convention on Wetlands as a Wetland of International Importance for its support of endangered species and large assemblages of migratory birds, as well as for its support of 10 Pelican Island National Wildlife Refuge species at critical stages in their biological development. In 2000, the Refuge was listed as a candidate Marine Protected Area for its protection of estuarine waters.

The Wilderness Act of 1964 created the National Wilderness Preservation System "in order to assure that an increasing population, accompanied by expanding settlement and growing mechanization, does not occupy and modify all areas in the United States, and its possession, leaving no lands designated for preservation and protection in their natural condition..."

The Pelican Island Wilderness is the smallest unit of the National Wilderness Preservation System. Initially encompassing 5.5 acres in 1970, Pelican Island Proper is now roughly 3 acres due to years of boat-induced wave action and sea-level rise.

Pelican Island National Wildlife Refuge continues to be protected, conserved, enhanced, and restored, providing high-quality, functional habitats managed to help sustain abundant populations of native species and to help recover threatened and endangered species. As the landscape continues to be developed, the importance of the refuge increases through time, as part of an interconnected system linking the Indian River Lagoon to the Atlantic Ocean through the Archie Carr NWR, and linking other public lands, habitats, refuges, and nations for global species protection.

1886: Creation of the Audubon Society by George Bird Grinnell marked the beginning of the national conservation ethic.

1903: On March 14, with the encouragement of Frank Chapman and the Florida Audubon Society, President Theodore Roosevelt established Pelican Island in the Indian River Lagoon as the first federal bird reservation, giving birth to the National Wildlife Refuge System. Audubon hired Paul Kroegel as the first warden of Pelican Island. By the end of his presidency, Roosevelt named nine more reservations in Florida and a total of 55 bird reservations and national game preserves, the forerunner to the National Wildlife Refuge System.

1959 – 1968: Joe Michael, an Orchid Island citrus grower, formed the Indian River Area Preservation League in 1959 and worked with others, including the Florida Audubon Society, on a nine-year crusade to lobby for the federal protection of the vital wetlands around Pelican Island. Thanks to him, the refuge expanded from a few islands in the Indian River Lagoon to over 5,400 acres of vital wetlands and upland habitat.

On May 22, 2010, Pelican Island NWR and partners honored the grower by renaming a trail the Joe Michael Memorial Trail. An observation deck -- Joe’s Overlook – commemorates him, too.

2001: A massive shoreline enhancement project was completed at Pelican Island. In 1903, the island’s area was 5.5 acres. Around 1943, the island began to shrink, eroding due to natural as well as human-induced wave action. By 2000, the island was less than half its original size. The threat of forever losing the island that started the American conservation movement sparked the U.S. Fish and Wildlife Service (Service) and its partners into action. An innovative plan was devised to install a 165-foot oyster shell wave break and plant smooth cordgrass and mangroves along the island shore to encourage sediment accretion, effectively building the island back up over time. Using a new technique and creating minimal disturbance to the island’s birds, a helicopter was used to airlift in the oyster shell material. The Save America’s Treasures program, the Florida Inland Navigation District, the St. Johns River Water Management District, and the Service provided matching funds for the project. The U.S. Army Corps of Engineers was a major partner in the effort.

2003: The Centennial Trail, boardwalk and observation tower was dedicated and opened on March 14, the date of the National Centennial Celebration that was held at Pelican Island NWR to honor the centennial of Pelican Island. It consists of a three-quarter-mile footpath that leads to a boardwalk and observation tower that overlooks the Indian River Lagoon with a view of Pelican Island proper directly across. The boardwalk consists of 569 planks. Each plank represents a national wildlife refuges in the United States, beginning with the most recent refuge at the bottom and ending with Pelican Island NWR at the top of the observation platform. Each plank is engraved with the refuge name, its state or territory, and establishment year. Interpretive panels are also included along the trail and boardwalk detailing the accomplishments of the refuge system for wildlife conservation in America and the people who made it happen. The trail features restored wetland, tidal mangrove and hydric hammock communities and is ADA accessible.