In an effort to combat the loss of Pelican Island proper due to erosion and sea level rise, shoreline stabilization efforts have been conducted in the past, including placing loose shell and shell bags and planting spartina and mangroves along the shore of Pelican Island proper. Large scale restoration efforts have also taken place on the upland areas of the refuge in conjunction with the state including the conversion of disturbed habitats to scrub shrub and maritime hammock. Current management activities include monitoring measurable changes to Pelican Island proper and the restored upland habitats.

Although the refuge does not include dune habitat, which is the kind of habitat favored by the Southeastern beach mouse, this species persists in an old field habitat on the refuge. The refuge has targeted approximately 5 acres to manage as coastal dune/scrub for the Southeastern beach mouse and other species. Management activities include mowing, exotic plant removal, herbicide application, pesticide application, tree removal and supplemental plantings

Pelican Island NWR has a fire management plan in place that allows the National Wildlife Refuge System to fulfill its mission to conserve and restore fish, wildlife and plant resources for the benefit of present and future generations. As part of the comprehensive conservation plans and environmental assessments for the refuge, a program is in place to manage any wildland fires and to conduct prescribed fires that help mitigate wildfire damage, encourage new growth of native vegetation, and maintain those habitats for the benefit of plant and animal species that depend on periodic fire.

Exotic, invasive, and nuisance species are serious threats to fish and wildlife in Florida. Service staff control exotic, invasive, and nuisance species on the refuge that threaten the survival of many species by displacing or killing individuals, destroying habitats, and disrupting ecological communities. In efforts to combat these noxious, invasive plants, chemical and mechanical control of Brazilian pepper, melaleuca, air potato, rosary pea, guinea grass, Chinese tallow tree, cogon grass, and Japanese climbing fern is conducted on the refuge.

Trapping Occurs on this Refuge

Trapping is a wildlife management tool used on some national wildlife refuges. Trapping may be used to protect endangered and threatened species or migratory birds or to control certain wildlife populations. The U.S. Fish and Wildlife Service also views trapping as a legitimate recreational and economic activity when there are harvestable surpluses of fur-bearing mammals. Outside of Alaska, refuges that permit trapping as a recreational use may require trappers to obtain a refuge special use permit. Signs are posted on refuges where trapping occurs. Contact the refuge manager for specific regulations. 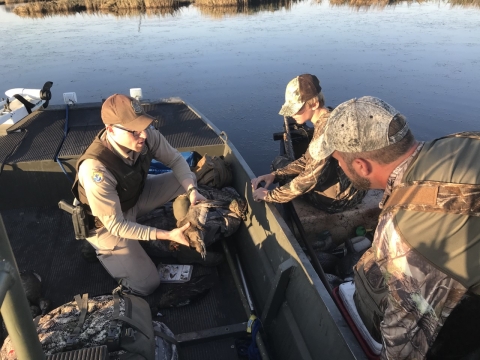 The mission of the National Wildlife Refuge System Law Enforcement program is:
"Through Education and enforcement we protect our employees, volunteers, and visitors; safeguard the public’s investment in facilities and equipment; and protect the integrity of the habitat and the wildlife resources of the National trust resource which is the 150 million acre National Wildlife Refuge System.”