About the lesser prairie-chicken

The lesser prairie-chicken is emblematic of the grasslands of the southwest, a treasured and storied American landscape of great importance to the people who call the area home. It is a species of prairie grouse commonly recognized for its colorful spring mating display and stout build.

The Service, in cooperation with state wildlife agencies, private landowners and other partners, is working to conserve the lesser prairie-chicken and the native grasslands and prairies that support the species.

The Southern DPS encompasses lesser prairie-chicken populations in eastern New Mexico and across the southwest Texas Panhandle. Habitat in this population segment is comprised largely of shinnery oak prairie. The Northern DPS encompasses lesser prairie-chicken populations in southeastern Colorado, southcentral to western Kansas, western Oklahoma and the northeast Texas Panhandle. This DPS includes the lesser prairie-chicken’s short-grass, mixed-grass and sand sagebrush sagebrush
The western United States’ sagebrush country encompasses over 175 million acres of public and private lands. The sagebrush landscape provides many benefits to our rural economies and communities, and it serves as crucial habitat for a diversity of wildlife, including the iconic greater sage-grouse and over 350 other species.

We are evaluating all new information gathered during the public comment period and will make a final listing determination in June 2022.

Our peer-reviewed species status assessment (SSA) provides a biological risk assessment and incorporates the effects of both the threats and conservation efforts impacting the lesser prairie-chicken and evaluates its current condition. It also examines its biological status under varying plausible future conditions, incorporating the implications of future threats and conservation actions. According to the assessment, habitat loss and fragmentation are expected to continue, even when accounting for ongoing and future conservation efforts, which will result in continued declines across the species’ range.

For over two decades, we've been working with our federal, state and private partners to facilitate the conservation of the lesser prairie-chicken and its habitat. These partnerships have resulted in a number of conservation efforts for the lesser prairie-chicken. Together we have made great strides, including raising awareness and conserving key habitat, but we still have a long way to go for a sustainable, long-term impact.

Learn more about these partnerships and agreements benefitting the lesser prairie-chicken.

The lesser prairie-chicken is a species of prairie grouse endemic to the southern and central high plains of the United States, commonly recognized for its feathered tarsi (legs), stout build, ground-dwelling habit, and lek mating behavior. The LEPC is closely related and generally similar in...

Kansas Ecological Services Field Office
The USFWS Kansas Ecological Services Field Office is located in Manhattan, Kansas, in the northern Flint Hills. The office provides information related to at-risk, threatened and endangered species that may occur in Kansas and other management directives for the USFWS and partners.
Conservation Office
Manhattan, KS 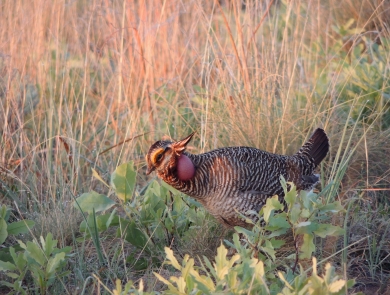 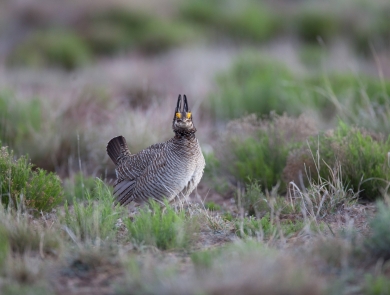 Endangered Species Act
Lesser Prairie-Chicken Listed Under the Endangered Species Act
Following a rigorous review of the best available scientific and commercial information regarding the past, present and future threats, as well as ongoing conservation efforts, the U.S. Fish and Wildlife Service is listing two Distinct Population Segments of the lesser prairie-chicken under the...
Nov 17, 2022