How do rivers sustain you?  In many vital ways, even if you live far from one.

How could that be? It’s a timely question more than 50 years after Congress, in 1968, created the Wild and Scenic Rivers Wild and Scenic Rivers
The Wild and Scenic Rivers Act of 1968 established the National Wild and Scenic Rivers System, and authorizes Congress to preserve certain rivers with outstanding natural, cultural and recreational values in a free-flowing condition for the enjoyment of present and future generations. The act is notable for safeguarding the special character of these rivers, while also recognizing the potential for their appropriate use and development. The act encourages river management that crosses political boundaries and promotes public participation in developing goals for river protection.

Learn more about Wild and Scenic Rivers System, which protects more than 12,000 miles of our nation’s rivers. Some of these are on national wildlife refuges.

For a glimpse of why rivers matter, come along on a water-themed wildlife refuge tour.

To see how central rivers are to us, let’s start our tour in a watershed. That’s not hard. Wherever you live, you’re in one.

“Rivers have always been and always will be the nucleus of this nation,” says Tom Cox, project leader at DeSoto and Boyer Chute National Wildlife Refuges in Iowa and Nebraska. “Rivers touch everything from recreation and transportation to commerce and conservation. They are impacted by everything in the watershed. It is humbling to think that the same water we use in Iowa and Nebraska and then return to the river will go downstream and be used by a refuge in Mississippi.”

This animated NASA map shows the flow of water through the Mississippi River watershed — North America’s largest, covering more than a third of the U.S. mainland.

Without water, we’d die. It’s that simple. Rivers give us water to drink.

Spend some time in the desert Southwest, and you appreciate rivers anew.

“Here at the Bill Williams River National Wildlife Refuge in Arizona — part of the Lower Colorado River system — water of any kind serves as a huge magnet for wildlife,” says refuge manager Glenn Klingler. “The birds here illustrate this, with more than 350 species of birds documented on the refuge."

The Lower Colorado River ecosystem, he notes, provides drinking water to millions of people, including those in Los Angeles, Phoenix and Tucson.

We can’t live on water alone. Luckily for us, rivers are a nutritional treasure trove. Head north for our next tour stop, where Alaska Native people are among the most appreciative end users.

“Fish are the primary component of subsistence harvests in many of Alaska’s indigenous communities. Local people are fish ‘connoisseurs,’ able to tell when and where fish of the same species were caught, based on their taste.”

Survival, trade and contact with others all depend on ease of movement. No wonder rivers have driven settlement through history. Alaska’s size and wild character make river travel even more important.

“This state, and all its refuges, are so huge, yet there are very few roads,” says Heather Bartlett, acting deputy manager at Arctic National Wildlife Refuge. “Because of this, rivers become the roads. People use them as primary travel corridors. In the summer, travel is by boat and raft. In the winter, people travel by snow machine, skis and dog teams.

“Instead of referencing street names, highways, or towns, people talk about locations in Alaska by referencing river names. To know the geography of Alaska is to know the rivers.”

Georgette adds, “Nearly all the rivers of Alaska are free-flowing, in sharp contrast to most of the rest of the country. The rivers rise and fall with rain, snowmelt, or lack thereof, and everyone must adjust accordingly. There are some places we can reach only in high water and other places we can’t access when the water is high.”

In the Northwest corner of the lower 48 states, the mighty Columbia River provides clean water and energy, eases flooding and supports industries from farming to shipping.

“We have a large number of dams used for hydropower and transportation,” says Jackie Ferrier, project leader at Willapa National Wildlife Refuge Complex in Washington state. One is the Bonneville Dam, situated upstream of two Willapa Complex refuges — Julia Butler Hansen Refuge for the Columbian White-tailed Deer and Lewis and Clark Refuge.

According to the U.S. Energy Information Administration, hydroelectric power is the leading renewable resource in Washington state, accounting for roughly two-thirds of the total electricity produced. The state also generates about 30 percent of the nation’s utility-scale hydroelectricity.

But dams pose a threat to salmon, limiting adults’ ability to swim upstream to spawn and juveniles’ ability to migrate downstream through turbines.

National fish hatcheries operated by the U.S. Fish and Wildlife Service help offset that loss. Hatcheries such as the Spring Creek National Fish Hatchery on the Columbia River raise millions of salmon each year and monitor their health. Hatcheries are vital to tribes as well as recreational and commercial anglers. To learn more about fisheries, see this video or this one.

“Rivers are the lifeblood of a landscape,” says Tom Koerner, manager of Seedskadee Refuge in Wyoming. “In dry climates, like Wyoming’s, almost 80 percent of wildlife species need wetlands and rivers at some point in their lifecycles. Fish and wildlife use rivers to migrate.”

Rivers that draw great concentrations of birds and other animals also draw people eager to see them.

“Here at Blackwater Refuge, the river and its marshes attract tens of thousands of waterfowl each winter along the Atlantic Flyway,” says refuge manager Marcia Pradines. “In the dead of winter, you will find wildlife watchers and waterfowl hunters alike attracted to the overwintering flocks. When the geese erupt off the water, a deafening roar fills your ears, and it’s a spectacle to behold.”

Learn more about National Recreation Trail . People from around the world travel here to find a relaxing float trip that can be completed in a few hours. They find the deep canyon and river full of native vegetation and animals. The float through the refuge is a great way to refresh your spirit and get a glimpse of what this area looked like long ago.”

Rivers also are economic engines. The Upper Mississippi River — stretching from Cairo, Illinois, to its headwaters in Minnesota — is a case in point.

“We like to think the refuge is the conduit for the outdoor recreation, commercial fishing and tourism portions of that profile. Without the refuge, you could imagine that development would have taken over those areas, and habitat degradation would preclude both commercial and recreational uses of the river.

Rivers that lead into hidden worlds of wonder and beauty

“What makes the Okefenokee National Wildlife Refuge so unique is that you travel into the beating heart of two of the Southeast’s most pristine rivers — the Suwannee River and the St. Marys,” says Michael Lusk, manager of the Georgia refuge.

“The refuge serves as the headwaters for both. The swamp slowly parcels out rainwater to these two important river systems. Without the swamp, you would have neither one.

“Both of these rivers are important for wildlife and people. For example, the Suwannee River serves as important habitat for the threatened Gulf sturgeon, while the St. Marys River provides habitat for the endangered Atlantic and shortnose sturgeon. Both of these rivers, because they are so pristine, offer excellent fishing and boating opportunities.”

Rivers that stir the soul

“For the Yupik peoples, the rivers are also their cultural center, providing the bases for the stories told by elders, and dances that depict fishing and gathering of wildlife for their sustenance.” — Ray Born, former deputy manager, Yukon Delta National Wildlife Refuge, Alaska

“A river isn’t only important to the animals who live in it or the people who boat on it. Rivers’ economic value, environmental value, and even aesthetic or spiritual values touch each and every American.” — Tom Bell, former manager, Big Muddy National Fish and Wildlife Refuge, Missouri

What can you do to help protect our nation’s rivers?

Here are river-friendly practices from ShoreRivers, a nonprofit dedicated to improving the health of Maryland’s Eastern Shore waterways. 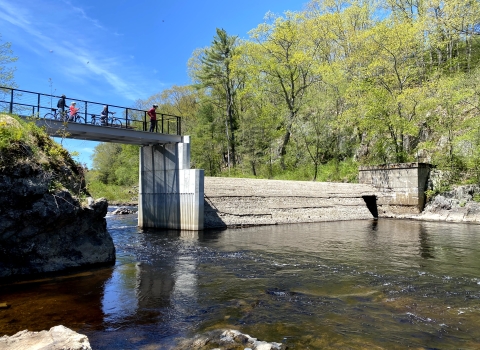