The future for piping plovers 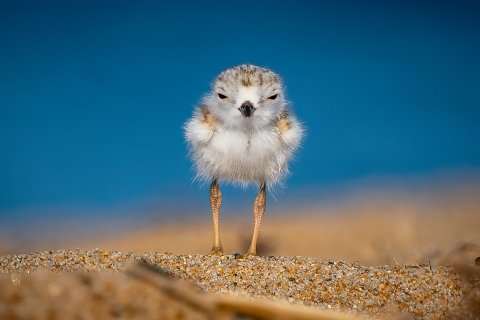 Put yourself in the mind of a piping plover for a moment: It’s early spring, and you’re looking to make landfall on the end of your thousand-mile journey North. You spy a strip of sand and run through your mental checklist of what makes a good nesting site. It's a close distance to the shoreline (check), a flat open space (check). It’s sandy and free from predators right now (check and check). You just hit beachside bingo.

Say you, as is characteristic of Atlantic Coast piping plovers, place your nest above the shoreline, high enough so that you’re out of reach from the surge of high tide, but near enough that, when they hatch, your chicks can safely rush to forage in the wrack line. But your evolutionary instinct doesn’t quite align with the abnormal tides of today’s world, a place with rising sea levels and more frequent storm surges. Perhaps a high tide wipes out your nest right after you’ve built it. A resilient creature, you move and build a new nest further up shore—“This is not ‘woe is me.’ This is what piping plovers do,” Anne Hecht, an endangered species biologist and Northeast plover lead put it. But this can happen again and again and again, and season through season, you keep moving further up the shore until there is nowhere left to go. Even the beach’s highest elevations are washing out in high tide.

This tale of habitats pushed to and beyond their normal limits is one that piping plovers know throughout their range—from the Great Plains’ fluvial shorelines and the Great Lakes’s sandy beaches to the Atlantic seaboard’s broad coast and the bird’s Southern and Caribbean wintering grounds. A population already tightened by human-influence—Jeeps driving across beaches, dogs running off leash, and dune-side housing developments—piping plovers are feeling the squeeze of climate change climate change
Climate change includes both global warming driven by human-induced emissions of greenhouse gases and the resulting large-scale shifts in weather patterns. Though there have been previous periods of climatic change, since the mid-20th century humans have had an unprecedented impact on Earth's climate system and caused change on a global scale.

Specifically, scientists look to sea level rise and the increase of intense, more frequent, and unseasonable storms, and how human infrastructure is responding to them, as the biggest threats that imperil the plover.

The Value of Disruption

While we often see climate change in black and white, its effects on plovers must be seen in shades of grey—a fitting approach for a small greyish bird whose sandy feathers often blend into its beach background. Piping plovers are an early successional species and prefer beach habitat shaped by ecological disturbance, as storms and tides pull swaths of sand across the beach and vegetation sparsely grows in.

Sara Zeigler, a landscape ecologist and research geographer with US Geological Survey (USGS), focuses her research on plover habitat. She explained a study that looked at habitat creation from storms. It showed that Hurricane Sandy, while devastating so much human development, created substantial habitat for plovers, which corresponded with higher population numbers and productivity.

“My work suggests that the species will likely do better when there are sites available where overwash can occur,” Zeigler said.

At Holgate Wilderness area, part of Edwin B. Forsythe National Wildlife Refuge in New Jersey, managers saw these effects of Sandy on plover habitat firsthand. Virgina Rettig, the refuge manager, described that the super storm pushed sand across the barrier island (“overwash”), which wiped out the shrubby vegetation that had taken over and created open foraging grounds on the backside–the calmer, landward side.

The storms that climate change is intensifying don’t necessarily spell doom for the plovers, but they’re not an inherent blessing either. They introduce a new set of complications and concerns for the bird: “Whether climate change benefits or hurts piping plovers will depend a lot on the human response that change,” Zeigler said.

The Threat of Changing Storms

Not only are storms becoming more intense and outside their regular seasons, but they are hitting coastal landscapes that are already moving and eroding due to rising sea levels—and in most places that’s met with a human impulse to gird shorelines, build seawalls, and prevent movement. It’s here, in these three variables, that the biggest unknowns for the Atlantic coast plovers lie.

“When we start to see storms that are happening during the breeding season, that’s kind of a new thing that people are struggling with knowing if this is a trend or an aberration,” Maureen Durkin, a wildlife biologist and plover coordinator for the Rhode Island National Wildlife Refuge Complex, said. “Because [these beaches have] evolved on this huge timescale and they depend on disturbance, it can be very difficult at the individual level to know if [a storm] is a normal part of the disturbance cycle or if it is an aberration that is moving the system outside of its normal ups and downs.”

Historically, hurricanes and Nor’easters hit Northeast Atlantic beaches in the late summer and winter, burying vegetation and generating sandy overwash. The plovers’ nesting season on the Atlantic Coast spans from around early April through mid-August, when the birds make their southern migration to the Caribbean, the Gulf of Mexico, and the Southern Atlantic Coast.

Now, climate change is pushing that pattern beyond its normal limits. Durkin described this by miming a sine wave: “The baseline of what the system has evolved under sort of has a top and a bottom limit of conditions. It's evolved to have a fluctuation within that. With climate change, what we’re seeing are conditions that are pushing the system beyond those limits, where you can start to have unanticipated changes. The timing of storms has changed, for example. While the system thrives on disturbance, it’s evolved under certain conditions, and we are seeing climate change move things outside of those parameters,” she said.

The first, Zeigler says, is the point at which these sandy, resilient barrier islands stop being able to build back from storms and sea level rise: “There comes a point with both storms and sea level rise when a barrier island will just start to disintegrate, when it can't move, when there isn't enough sediment. But we don't know yet what those threshold values are.”

She explained that we often think of sea levels rising like a bathtub, filling to submerge the shoreline, but on these dynamic beaches, we really should think of it as a process that moves the landscape. Erika Lentz, a research Geologist at the USGS, is changing the way scientists model this rise beyond those bathtub models. Instead, she describes that shorelines will experience a “dynamic landscape response” to sea-level rise.

The second unknown is how humans will respond: "People love stability. As we start to see these processes having profound changes on the landscape, it's going to be human nature for communities and individual homeowners to stabilize their beaches and their shorelines. If that starts happening, sea level rise will indirectly harm plovers because that habitat just won’t be available anymore; it's not being created. So the places that are fully protected for these birds, and human structures minimized, like National Wildlife Refuge and the National Seashores, are going to become more and more important,” Zeigler said

“One of the key determinants in how plover habitat and plovers will be affected by sea level rise is whether the beach in question is allowed to respond dynamically,” said Hecht, the Northeast plover lead.

The Threat of Shoreline Armoring

Already, Durkin sees how attempts to stabilize sea level rise and storm surges are affecting the beaches she monitors. She describes walking the beaches and seeing where shoreline armoring, things like jetties or seawalls, has created a “cascading effect” of erosion and deposition down neighboring beaches. With jetties, sand builds up on one side while it completely washes out on the other.

“It’s very dramatic when you’re out there on the beach,” she said.

The most dramatic, though, are the places where human infrastructure has prevented beach migration altogether, when water comes in and moves beach and sand until it can move no more. “Think of houses with seawall and rocks but totally no beach,” she said.

Zeigler underscored this same dramatic shift by pulling up an aerial map of Long Beach Island, in New Jersey. It’s a popular beach vacation spot down the Jersey shore, and a quick look at Google Maps proves it: the island is crowded with dense houses, a grid system of streets, and a strictly linear shoreline. That is, until you reach the end. There, Edwin B. Forsythe National Wildlife Refuge manages a stretch of undeveloped wilderness. At this end of the island, you can see how the shoreline has markedly moved back feet from the rest of the island’s armored and narrow beach. When water comes in, Forsythe’s beaches are not so much losing ground as they are moving it.

“It’s a very tough balance because certainly there’s a lot of very legitimate concern about human structures and coastal communities, but at the same time, trying to force a dynamic system to be static results in a lot of issues for species that evolved under dynamic regimes,” Durkin added.

Working with Nature to Protect Plovers

But balancing human and plover habitat is not a pipe dream: “We can have both—we do have both,” Virginia Rettig, from Forsythe, said.

Restorations that prioritize nature-based solutions over hard infrastructure, like seawalls, are a sterling way to preserve and protect plover habitat. Prime Hook National Wildlife Refuge, in Delaware, exemplifies this shift, as its massive post-Sandy restoration designed a landscape works with the dynamic shifts of climate change. The coastal refuge went from being an entirely plover-less refuge to reporting 17 nesting pairs and 26 fledged chicks this season.

Even where restoration is not happening, birds are finding resilient ways to rebound in these changing environments. Maureen Durkin described a particularly quirky pair of birds in Rhode Island who nested inside the bank of a bluff, on a site where a storm had eroded  most of the sandy beach, leaving a steep drop-off. They hatched and fledged two chicks.

“They really do surprise you sometimes,” she said.

But, the lengths that the birds are reaching to find suitable nesting habitat only further underscore the importance of protecting quiet, dynamic beaches for the birds.

“There is no end to protecting habitat for these birds,” said Rettig. “The places we have for them are the only places.”