Learn more about Bipartisan Infrastructure Law , jackhammers are demolishing dams on the Sabattus River in Maine, a new channel is being cut around the Old Evanston Dam in Wyoming, an undersized culvert is being pulled from the Little Tonsina River in Alaska, and more than 100 other barriers are slated for removal from rivers across the country to allow fish to swim freely once more.

The infrastructure law, which was passed in November of 2021, delivered a once-in-a-generation investment in aquatic ecosystem restoration – including $200 million over five years for the National Fish Passage Program to restore free-flowing waters, improve fish migration, address threats from climate change climate change
Climate change includes both global warming driven by human-induced emissions of greenhouse gases and the resulting large-scale shifts in weather patterns. Though there have been previous periods of climatic change, since the mid-20th century humans have had an unprecedented impact on Earth's climate system and caused change on a global scale.

When rivers are fragmented by dams, culverts, or other diversions, they can become congested. These aquatic barriers have the same effect as roadblocks on a busy highway. Traffic backs up, people get stranded, and emergency services stall out. The added congestion on the system puts everyone at risk.

Across the country over six million barriers are blocking transportation networks for fish and other aquatic wildlife. But unlike roadblocks that can often be avoided, fish can’t simply take a detour when their swimways are blocked. Instead, they become separated from their breeding grounds, cut off from food sources, or trapped in unsafe waters. Fish passage programs help by finding blockages and either removing them or creating a detour that fish can use.

On the Upper Bear River, straddling the border between Wyoming and Utah, local landowners and conservation partners like Western Native Trout Initiative, Trout Unlimited, the City of Evanston, and many others have been working for over a decade to reopen historic habitat for a population of Bonneville cutthroat trout genetically unique to Utah’s Bear River Watershed (and appropriately named “Bear River cutthroat trout”.)

Bear River cutthroat trout rely on different parts of the river system for cold water refuges, but years of water diversions prevented the fish from accessing the full extent of the river to find safe habitat and spawning grounds.

Four new fish passage projects starting this year will open access to nearly 45 miles of important habitat. The first of the projects will realign the Bear River around the Old City of Evanston Dam, a concrete dam formerly used to supply the town and other users with water. Improvements like these don’t just benefit the wildlife however, they’re also good for people.

On the Sabattus River in Maine, a new fish passage project is removing two obsolete dams and restoring riverbanks. The project will improve habitat for fish and wildlife while reducing flood risk and opening parks and safe access to nature for nearby communities.

Removing these dams, in combination with other restoration projects along the Sabattus River, is expected to reopen 2,429 acres of lake and pond habitat and 75 miles of river and stream habitat for alewife, blueback herring, American shad, federally endangered Atlantic salmon, and American eel. Once access is restored, nearly 50,000 adult alewife from Sabattus Pond could return to the Androscoggin Watershed each year!

Wildlife and watersheds don’t often fit into the tidy lines on the map, so communities and partners have to work together across jurisdictional lines.

Improving aquatic habitat builds climate resiliency in the communities that need it most.

As climate change continues to disrupt our waterways, it’s increasingly important to ensure that infrastructure is ready to withstand the changes. Culverts and bridges that are designed for both higher water flows and the needs of wildlife help keep salmon runs resilient, fisheries stable, and roads reliable for local communities and economies.

In 2006, a flooding event on the Little Tonsina River overwhelmed an access road in Alaska’s Valdez-Cordova Borough— homelands to Ahtna people and an area that Sugpiaq and rural Alaskans depend on for access to hunting and fishing, wild food security, and cultural ties to the land.  An emergency culvert replacement gave temporary access to the road, but a more lasting solution was needed to protect access to the area and allow the native fish to migrate freely.

This year, partners including the Chugach Alaska Corporation, Alaska Department of Transportation, and the Copper River Watershed Project received additional funding from the National Fish Passage Program to kick start a solution.  They broke ground on a two-lane bridge that is designed for a 100-year flood event and employs some of the U.S. Fish and Wildlife Service’s comprehensive design guidelines.

Like all the projects funded this year, the bridge follows state and local investments in fish-friendly infrastructure across the country that would not be possible without the support and participation of thousands of partners.

Dam removal, culvert replacement, and other fish passage projects are complex infrastructure improvements that typically take years to plan and develop.  The National Fish Passage Program has been working with local partners for decades to help lay the groundwork for these projects.

“When the infrastructure law passed, we were able to quickly tap into our extensive partnership network and start getting funding to the people and organizations who would put it to good use,” said Eric MacMillan, Chief of the Branch of Aquatic Habitat and Species Conservation for the U.S. Fish and Wildlife Service.

Thanks to a national network of landowners, conservation organizations, Tribes, and local governments, U.S. Fish and Wildlife Service biologists and engineers were able to provide rapid assistance in the planning, design, implementation, and monitoring of the projects.

The Bipartisan Infrastructure Law is a strong investment in local, state and Tribal communities to help tackle the climate crisis while creating jobs, advancing environmental justice and boosting local economies. 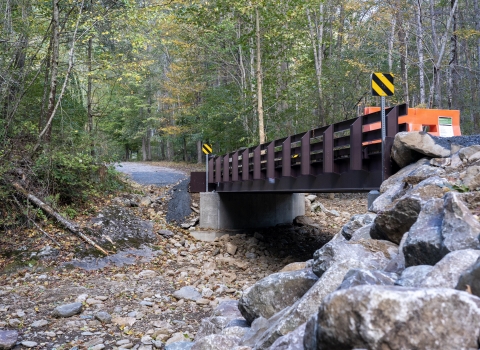 Habitat Restoration
What is Fish Passage? 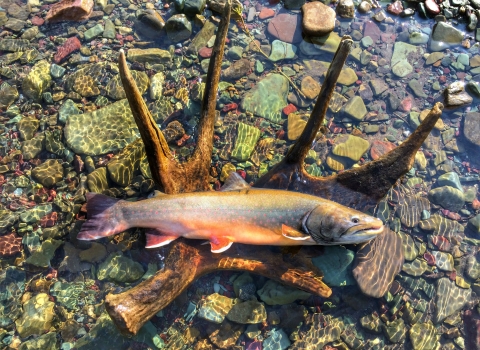 Habitat Restoration
Stronger than the Sum of Its Parts