Occoquan Bay National Wildlife Refuge was established in June 1998 to provide habitat for migratory birds and endangered species. The refuge's diverse grassland, marsh and forest habitats attract a variety songbirds, raptors and waterfowl that depend on the area for food, nesting sites, and a place to rest. Visitors share this feeling of respite as they explore the refuge trails and observe the abundance of wildlife drawn to this one-square mile refuge; a sanctuary in an urban setting.

Occoquan Bay National Wildlife Refuge will strive to preserve, restore, and enhance the exceptional diversity of native flora and fauna and significant historic resources in a highly urbanized area, for the benefit of present and future generations of Americans. In addition to providing critical habitat for wildlife, the wide variety of habitat types accessible to refuge visitors provide unparalleled opportunities to demonstrate the role of national wildlife refuges, as well as the benefits of habitat management for wildlife, on a broader scale.

The purpose of Occoquan Bay National Wildlife Refuge is to provide: 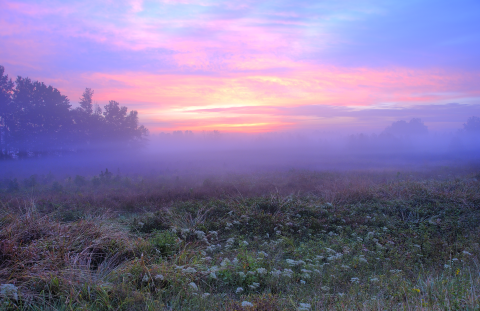 Long before Europeans colonized North America, the Dogue Indigenous People resided in Virginia and Maryland. When John Smith explored the Chesapeake Bay and its tributaries in the 1600s, he found a well-established Dogue village at the mouth of the Occoquan River. By the late 1600s, Native Americans were driven out, and their way of life was displaced by the establishment of colonial farm holdings. Over time, floods, fire, and farming kept the vegetation low or in early succession in this area, creating meadows and open spaces. The Army obtained the site in 1950 for a radio transmitting station, and fields of antennas replaced cows and crops. In the 1970s, the base’s mission shifted to electromagnetic pulse testing, prompting further reduction of trees and vegetation on the property. The research facility closed its operations in September 1994, under the Base Realignment and Closure Act. Thanks to local initiative and support, Occoquan Bay National Wildlife Refuge was established in June 1998, to protect habitat for migratory birds, maintain the natural habitat diversity, and provide environmental education to the public. The U.S. Fish and Wildlife Service continues to preserve the unique species and habitat diversity of the refuge to this day.