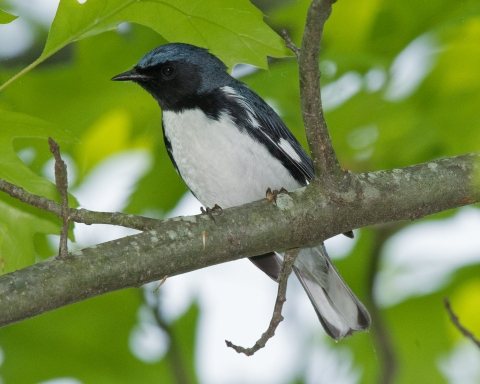 Occoquan Bay National Wildlife Refuge is a popular birding spot, especially because of its grassland-nesting and grassland-wintering birds, neo-tropical migrants, and raptors, many of whom are uncommon in the heavily developed Washington D.C./Northern Virginia region. The refuge has over 200 species of breeding, wintering, or migrating birds, and more than 20 species found using the adjacent river and bays. Grassland breeding birds arrive at the end of April to set up territories. Raptors migrate through the Refuge in April and May. Waves of migrating songbirds, especially warblers, vireos, thrushes, and flycatchers pass through in May and again in late summer and early fall. In October and November, and into the winter months, dabbling ducks are found in shallow habitats adjacent to refuge tidal marshes; diving ducks congregate in deeper waters adjacent to the refuge in Occoquan and Belmont Bays. Wintering loons, grebes, red-breasted mergansers, and diving ducks are found along the bay sides of the refuge.