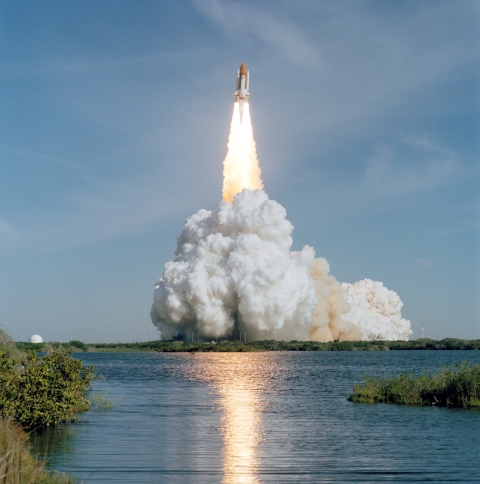 The refuge traces its beginnings to the development of the nation’s Space Program. In 1962, NASA acquired the lands and waters adjacent to Cape Canaveral to establish the John F. Kennedy Space Center. NASA built a launch complex and other space-related facilities, but development of most of the area was not necessary. On August 28, 1963, as the 286th refuge of the National Wildlife Refuge System, the U.S. Fish and Wildlife Service signed an agreement to establish the Merritt Island National Wildlife Refuge. In 1975 a second agreement established Canaveral National Seashore. Today, the Department of Interior manages most of the undeveloped portions of the Kennedy Space Center as a National Wildlife Refuge and National Seashore.

The U.S. Fish and Wildlife Service administratively designated Merritt Island Refuge in 1963 under the provisions of the Migratory Bird Conservation Act, outlining a primary purpose of these lands and waters: “…for use as an inviolate sanctuary, or for any other management purpose, for migratory birds.” and “…to conserve and protect migratory birds… and other species of wildlife that are listed…as endangered species or threatened species and to restore or develop adequate wildlife habitat.” 16 USC §715i (Migratory Bird Conservation Act)

About 12,000 years ago, the first people reached Florida after crossing the Siberian land bridge and migrating across North America. At that time, the Florida peninsula would have been about twice as large as it is today with sea levels 20 to 30 feet below the present location. Archeological evidence shows that Paleo-Indian's would have shared Florida with large animals such as mastodon, giant armadillo, camel, bison, and mammoths. However, it is likely they consumed mostly plants, nuts, mammals such as rabbit, raccoon, opossum, squirrel, and deer along with fish and marine life. Thus the hunting and fishing as a means of subsistence in Florida began with the first inhabitants. From this time forward, history of the Space Coast – both cultural and natural - has been rich and diverse.

About 7,000 years ago, the last glaciers retreated, sea level increased, and the barrier island and lagoons that now form Merritt Island National Wildlife Refuge were created. Just inland from the barrier island, these Paleo-Indians were the earliest inhabitants of the Indian River Lagoon region. The descendents of these peoples settled in the area and made their living off the vast resources of the Indian River Lagoon, the St. Johns River, and the surrounding uplands. By 2000 BC, the earliest Americans were making pottery and weapons of stone, shell, and animal teeth and still survived as hunter/gatherers, although rising sea levels had reduced the size of the peninsula to roughly its current size. Eventually, distinct tribes known today as Ais and Timucuans formed and lived along the shores of the Indian River, leaving behind evidence including huge mounds of discarded shellfish, animal bones, and fractured pottery. From these mounds, much has been learned about these peoples and their way of life.

The first contacts between North American Indians and European explorers likely occurred in 1513 when Juan Ponce de Leon encountered Ais Indians in a village near Cape Canaveral. During this era, Spanish explorers were frequently shipwrecked along the Florida coast. These contacts brought great changes to the Ais culture and by the time a permanent Spanish settlement occurred in St. Augustine in Florida in 1565, the Ais were viewed as fierce warriors. Eventually, disease, warfare, and malnutrition led to the demise of these early cultures.

For the next 200 years, the population of Florida grew slowly and ethnicity of the inhabitants became more diverse. What is known today as Brevard County was a part of Mosquito County until Florida officially became a state in 1845. The county was first named St. Lucie and spread southward to Dade County. Several other boundary changes occurred until 1959 when Brevard attained the present-day boundaries.

One of the few settlers of the Titusville area prior to the Civil War was Douglas Dummitt who moved to the area from Tomoka where he was the postmaster and a sugarcane farmer in the 1820’s and 1830’s. Douglas was also one of the few planters to cultivate oranges and sold his first orange crop in 1828. While still living in Tomoka, he began experimenting with various techniques of citrus cultivation by planting wild sour-orange trees that had likely originated with the Spanish and acclimated to the Florida soil and climate. He grafted cuttings from sweet orange trees – purportedly from groves planted by the Turnbull colonists at New Smyrna – to sour-orange root stock. These experimental trees survived the famous 1835 freeze and were transplanted to the Dummitt Grove (now a part of Merritt Island NWR) following the Second Seminole War. Dummitt increased the size of his grove over the years and by 1859 was producing an estimated 60,000 oranges a year. He contributed to the development of the Indian River citrus region by selling budwood to other growers to start new groves in the region. Dummitt died at his orange grove in 1873, after having made many significant contributions to the political and economic development of the Indian River region.

The year 1854 brought a significant event to the area: the spit of land between the Indian River and Mosquito Lagoon that had been used as a “haul over” for centuries was officially improved and opened. This was one of the first major man-made improvements to the inland waterway system that had served Florida travelers since pre-historic times. At that time, the haul over measured approximately one-third of a mile long, 10-12 feet wide, 3 feet deep, and was primarily used by shallow draft vessels. Further improvements to the canal began in 1885 and the work was completed by the U.S. Army Corps of Engineers in the 1930’s. Today, Haulover Canal is a part of the Intercoastal Waterway and is used by thousands of vessels annually to travel between the Mosquito Lagoon and Indian River on their trek up and down the east coast. Fishermen and paddlers also use the Canal in large numbers.

Overall, little significant development occurred in the region from the late 1920’s until after World War II. Shortly after the war began, a period of rapid growth stimulated in part by the development of the United States space industry complex at Cape Canaveral, occurred. The quest for space use and exploration began in 1950 with the establishment of a missile testing range at Cape Canaveral. At that time, the United States federal government already owned the land surrounding the Cape Canaveral lighthouse. The government acquired the remaining acreage necessary for the facility from private land owners. In 1958, the National Aeronautics and Space Administration began operations at the cape. NASA’s primary function was to launch communication, meteorological, and scientific satellites. NASA vaulted to the forefront nationally in 1961 when President John F. Kennedy announced plans to place a man on the moon before the end of the decade.

In 1963, the federal government acquired 140,000+ acres north and west of the Cape on Merritt Island where a major support facility for the launch complex – the John F. Kennedy Space Center – would be developed. Kennedy was right – on July 20, 1969, man stepped on the face of the moon. The first Space Shuttle mission, STS-1 (Space Transportation System) was launched April 12, 1981. The Columbia orbited the Earth 36 times in the 54.5 hour mission. This was the first U.S. manned space flight since the Apollo-Soyuz Test Project in July 1975.

When NASA purchased the land that is now the Refuge, several families lived here and farmed the lands. Remnants of old foundations and canals are visible at various locations, especially near Haulover Canal.

On August 28, 1963, the U.S. Fish and Wildlife Service entered into an Interagency Agreement with NASA to manage all lands within the Kennedy Space Center that are not currently being used for NASA KSC operations. These lands, known today as the Merritt Island National Wildlife Refuge, provide habitat for more than 1,500 species of plants and wildlife. With an excellent long-term working relationship among NASA, the Fish and Wildlife Service and the National Park Service, this unique area is a shining example of how nature and technology can peacefully co-exist.