Each spring, hundreds of thousands of fish migrate from the ocean to the Connecticut River such as alewife and blueback herring, American eel and American shad, sea lamprey, striped bass, shortnose sturgeon and more recently, Atlantic sturgeon. These fish are ecologically, culturally and economically important to the region as an important food source for people, and for other fish and wildlife, including fish and wildlife that people like to eat. 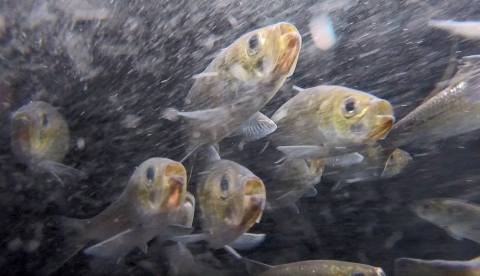 Restoring alewife, blueback herring, shad, eel, and the shortnose sturgeon are office priorities, however, all migratory and resident aquatic species benefit from our efforts. We are monitoring fish populations, cooperating on research studies, removing obstacles to migration, creating fishways so fish can migrate around dams, and boosting dwindling populations with fish from other stable populations.

The National Marine Fisheries Service conducted a comprehensive review of the status of alewife and blueback herring in 2013. They determined that listing as endangered or threatened was not warranted. The National Marine Fisheries Service noted, however, that there was a need for increased measures to conserve the fish, and improved monitoring and research to carefully track population trends. A moratorium on fishing for alewife and blueback herring remains in place in Connecticut and throughout most of the east coast. The Atlantic States Marine Fisheries Commission, however, does allow fishing in some rivers.

American shad were greatly affected by pollution and dams, and their numbers are still well below historical levels throughout their range. Some rivers, however, are showing improved runs of shad. For example, numbers have increased substantially in parts of the Connecticut River basin, with a record number (over 39,000) counted using the fish passage at Vernon Dam in 2015. While this is encouraging, improvements to fish passage in the Connecticut River are still needed to restore a fully sustainable recreational and commercial fishery for American shad. Continued monitoring to carefully track population trends is helping us manage for future commercial and recreational shad fishing. 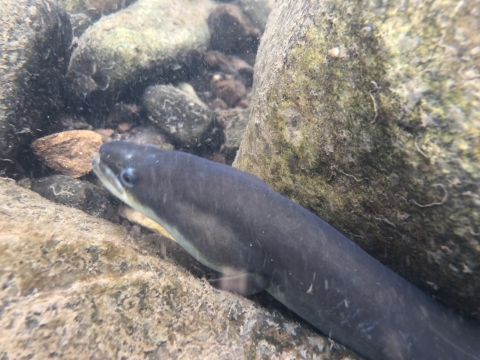 American eel once made up over a quarter of the total fish found in Atlantic coastal streams. Their status also was recently reviewed and determined that listing as federally endangered was not warranted. The Service called for improving passage around dams and improved monitoring to carefully track population trends. Biologists are working on ways to allow eels to move up and downstream of dams.

Shortnose sturgeon is federally endangered because of overfishing, loss of habitat, and restricted access between upstream spawning habitat and downstream foraging habitats in the river and in the ocean. Up and downstream movements have been improved, however, at the Holyoke Dam with new fish passage and protection measures completed in 2016. Opening rivers so they can reach their spawning grounds helps improve their reproductive success and increase their population size.

In the 1880’s through 1950’s, there was a large commercial fishery for Atlantic sturgeon but by the 1990’s, many states had closed their fishing. Decades of losing good spawning and nursery habitat, pollution, overfishing and damming of rivers caused their numbers in the wild to become very low. In 2012, The National Oceanic and Atmospheric Administration listed them as endangered along parts of the eastern United States. It is illegal to fish for them, and illegal to take their eggs. Biologists have recently documented young Atlantic sturgeon in the lower Connecticut River, suggesting natural reproduction may be occurring again in the river. 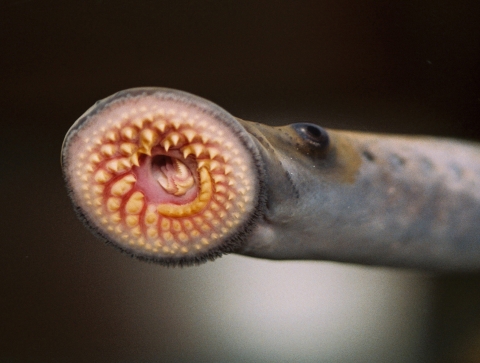 Sea lamprey is a parasitic fish, native to the Atlantic ocean. The Connecticut River is home to one of the largest known populations on the east coast. These “primitive fishes” are much maligned outside of their historic range, where they have inflicted considerable damage to the recreational fishery in the Great Lakes and Lake Champlain. On the east coast, however, they are an important part of the ecosystem. Adult nesting behavior in rivers helps clean river sediments and improves spawning habitat for other fishes. The eggs, larvae and juvenile life stages are important food items for other fish, too. Upon their death post-spawning, adults provide important nutrients to the river, especially in headwater areas.

Americans derive significant economic and recreational enjoyment from fishing, as well as important ecological and health benefits from fish and healthy aquatic habitats. The Connecticut River Fish and Wildlife Conservation Office (CRFWCO) works to improve and maintain those benefits for Americans by conserving the quantity and quality of habitat for fish and restoring access to those habitats. The CRFWCO also administers habitat improvement and fish passage grants through several federal grant programs.

Migratory fishes, like American shad, use marine and freshwater habitats to complete their complex life cycle. They use unique places for spawning, feeding, and growing and need to be able to move among these habitat areas at different times of the year.

Barriers such as dams or under-sized culverts can prevent their migration or restrict their movements. Hydropower can alter river flows and restrict fish movement too, by restricting flows to store water and then releasing in pulses greater than normal, which fish are not equipped to handle. This can happen within a 24-hour period to generate power in peak commercial periods (Figure 1). Low flows are especially worrisome, when not enough water is flowing to maintain fish and their habitats.

Fishways have opened up hundreds of miles of river to migratory fish in the Connecticut River watershed! We know this because we count the number of fish passing through these structures. Knowing how many fish and what species use these fishways helps us make decisions on how to best restore our migratory fishes.

The Leesville Dam on the Salmon River in Connecticut is monitored only...
Connecticut River Basin Fishway Passage Counts