The rapid warming of the earth’s atmosphere poses historic challenges for the world — and for the National Wildlife Refuge System.

In such conditions, how does the Refuge System fulfill its mission to conserve wildlife and wildlife habitat for the benefit of the American people? As climate change climate change
Climate change includes both global warming driven by human-induced emissions of greenhouse gases and the resulting large-scale shifts in weather patterns. Though there have been previous periods of climatic change, since the mid-20th century humans have had an unprecedented impact on Earth's climate system and caused change on a global scale.

Because the environmental changes under way are so pronounced and so widespread, fighting them all is not possible. Instead, the Refuge System is using the best-available science to help decide where to adapt, where to resist and what tools to use to do so.

In the past, habitats — areas that provide the food and shelter wildlife need to survive— were relatively stable: Wildlife moved in and out, but, generally, scientists knew what conditions to expect. No more. Across the Refuge System, particularly in the far north and along the East Coast, warming-induced changes are so marked that the past is no longer predictive of the future.

Some of the most pronounced effects are being seen in Alaska, Florida and the Southeast.

At Arctic National Wildlife Refuge in Alaska, the wildfire season now stretches from April to September—about a month longer than in the past, thanks in part to climate change. The longer season, combined with drier conditions, is leading to more frequent and more severe wildfires.

Farther south in Alaska’s Kenai Peninsula, increased wildfire activity has consumed subalpine and alpine habitats that usually do not burn. Warmer and drier conditions have also brought more beetle infestation and fire disturbance to spruce forests. Forest regeneration is no longer supported in these stands. Instead, a savannah grassland is emerging, totally altering the region’s historic ecosystem.

In Florida, National Key Deer Refuge is slowly sinking, succumbing to sea-level rise. As the island shrinks, so does habitat for threatened Key deer, which live only in the Florida Keys.

Along the South Carolina coast, the islands of Cape Romain National Wildlife Refuge provide important nesting habitat for the endangered loggerhead sea turtle. But rising seas are eroding nesting areas so badly that staff and volunteers must often rescue and relocate turtle nests before they are washed out to sea.

The American crocodile, native to southern Florida, also faces pressure from rising seas. Staff at Crocodile Lake National Wildlife Refuge have to add sand to historic nesting mounds to elevate them and “buy time” for these ancient reptiles.

In the Great Plains, some bird species are shifting their range up to 360 miles northward, according to recent studies. Some species that used to winter in the South may no longer need to migrate as far to find food or shelter. This is especially true for waterfowl, which seek open water and food in winter.

Tropical plant species like mangroves also are moving north, as cold snaps that used to stop them become less frequent. Along the Texas coast near Aransas National Wildlife Refuge, mangroves are encroaching into salt marshes that provide winter habitat for endangered whooping cranes. Land managers worry that if the expansion continues, it will shrink winter habitat for these rare birds.

When ocean water becomes too warm, sea corals expel the algae living in their tissues and turn white. Without the algae that they need to grow, corals become stressed and vulnerable to further damage. Such “coral bleaching” events tied to climate change are becoming more common in areas around Rose Atoll National Wildlife Refuge and elsewhere in the Pacific Ocean.

More severe and prolonged drought forecast for the Southwest, exacerbated by climate change, is expected to change the makeup of pinion-juniper forests and the animals that live in them. Pinion trees depend on birds like the pinion jay to broadly distribute their seeds. When there are fewer pinions and fewer birds, as a result of drought, both suffer losses.

At Colorado’s Arapaho National Wildlife Refuge and other places in the Rockies, small mammals are climbing higher to beat the heat. Some, like the pika, a tiny rabbit-like mammal, are running out of places to move because they already live high in the mountains. 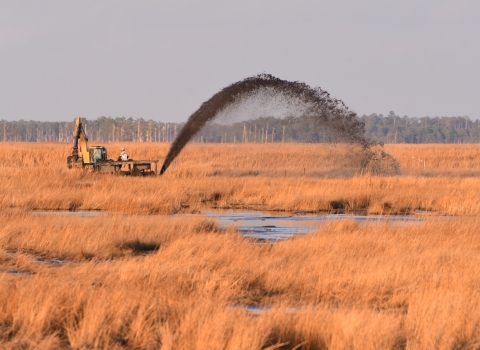