Refuge management focuses on maintaining natural areas and wilderness values. In this context, management first provides habitat for migratory birds and endangered species followed closely with an emphasis on native wildlife and sensitive species. Water is managed to provide nesting habitat for swans, waterfowl and fisheries. Much of the Refuge already has substantial natural habitat diversity; management seeks to enhance those natural area values where appropriate and sustainably maintain them utilizing natural processes.

The majestic Centennial Valley of southwest Montana is an expansive mosaic of high elevation wetlands, cool season grasslands, sage-steppe, and mountain forests framed by dramatic mountain peaks. Partnerships and conservation programs have helped the valley to maintain its biological integrity and continue to be a working landscape that remains largely undeveloped.

To this end, Red Rock Lakes National Wildlife Refuge is a conservation leader in the Centennial Valley working to maintain and restore natural processes to create and sustain native habitat for migratory and resident fish and wildlife. Visitors can expect to experience a sense of solitude and wildness while on the Refuge and in the valley. 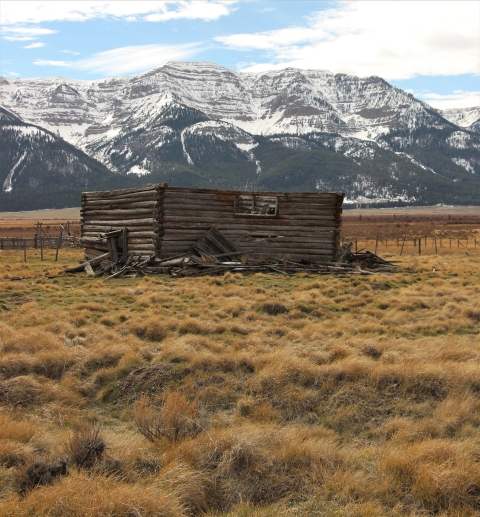 Since the Refuge boundary was established, the U.S. Fish & Wildlife Service has acquired lands from willing landowners or by receiving donations. The Service currently owns 53,418 acres within the approved boundary, with designated wilderness consisting of 32,350 acres. The Refuge also manages conservation easements totaling 23,806 acres.

The Centennial Valley was well known to the Shoshone-Bannock, Nez Perce, and other nomadic tribes as a favored travel route between the headwaters of the Big Hole River and the Yellowstone country. The wide stretches of uninterrupted native grasslands provided grazing bison with ample feed and served as their traditional summer range. Settlement by Euro-Americans did not occur until 1876. Herds of livestock were driven into the valley and homesteads sprang up in scattered locations. In the early days, market hunting for waterfowl and big game brought some revenue to local residents, but most settlers concentrated on livestock and sporadic lumbering. The long winters, great distances to market, and small land parcels combined to make subsistence difficult. Few survived the depression of the 1930s.

The Monida-Yellowstone stagecoach line passed through Red Rock Lakes NWR on what is now South Valley Road and Red Rock Pass Road. Originally established in 1898, the four-horse drawn stagecoaches carried passengers between the railroad station in Monida and West Yellowstone and Henry's Lake. A note from the Madisonian newspaper from August 28, 1902, notes that the stage line "has carried over 12,000 passengers to the National Park this season and are having all they can handle every day. They have had to put on extra teams to accommodate the large number of tourists." The grand era of stagecoach travel in West Yellowstone ended in 1917 when touring cars replaced the stages. A plaque near Shambow Pond commemorates the site of the half-way house used by stagecoach travelers on their way west. Trumpeter swans and other waterfowl can now be seen on Shambow Pond.

Red Rock Lakes National Wildlife Refuge invites you to view and enjoy the nearby historic buildings and artifacts. Please be advised that altering, defacing, or removal of any historical materials from Refuge property is prohibited. Shambow Pond and the immediate area surrounding it is closed to all public use and access.

Red Rock Lakes National Wildlife Refuge is unique, such that it is a "stand alone" Refuge and belongs to no Refuge complex; neither does it have any other facilities associated with it.