Moosehorn NWR contains over 4,500 acres of wetlands, including 28 functional impoundments or flowages that provide habitat for nesting and migrating waterfowl and marsh birds. The refuge has 18 miles of rocky shoreline along Dennys and Whiting Bays and 7 miles of shoreline on Meddybemps Lake. These small bays are part of the larger Cobscook Bay that supports the highest density of nesting bald eagles in the northeastern U.S. and has been essential to the recovery of the bald eagle in the east. The bay also provides critical migration and wintering habitat for the American black duck.

The Wilderness Act of 1964 created the National Wilderness Preservation System "in order to assure that an increasing population, accompanied by expanding settlement and growing mechanization, does not occupy and modify all areas in the United States, and its possession, leaving no lands designated for preservation and protection in their natural condition..."

The staff at Moosehorn National Wildlife Refuge manages the land to protect the Service's "trust resources" which include migratory birds, endangered species, and wetlands. By improving habitat, the Service ensures that wildlife will thrive on the refuge. 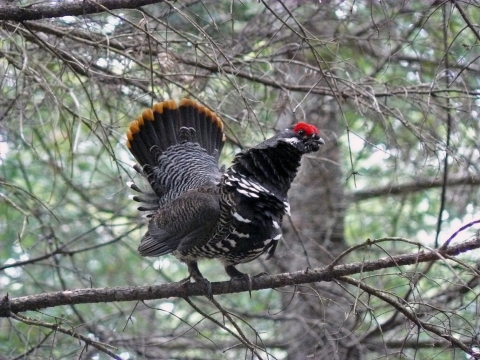 Some of the management practices employed to achieve our goals include:

Refuge staff also monitor environmental conditions and wildlife populations through surveys and studies that include:

During the establishment of the refuge the importance of the area to the American woodcock was identified as a priority consideration. Research on the biology and habitat needs of the woodcock began shortly after the refuge’s establishment and continue today. Much of the knowledge on the habitat needs of this species is based on research and management that occurred at Moosehorn. The refuge continues to serve as a research and demonstration area for a variety of wildlife habitat management techniques.

In addition to woodcock research on waterfowl, songbirds, and mammals has resulted in a number of publications. The refuge continues encourages researchers to conduct their studies on our lands.

The refuge once had an over abundance of white-tailed deer and was first opened to hunting in 1954. We continue to offer quality hunting and fishing opportunities to the public under State regulations. Limited trapping of furbearers is also permitted to manage their populations outside the Wilderness Areas.

In 1991 a pair of bald eagles began nesting on an osprey platform near US Route 1. A pair of eagles has nested in the platform within sight of the most heavily traveled roadway in Washington County. They have become  a local attraction and provide many visitors an opportunity to observe our National bird.

Most of the refuge is open to visitors that may walk interpretive trails or hike, bike, snowshoe, or ski on our 40 miles of gravel service roads. An auto tour route is also open during snow free months.