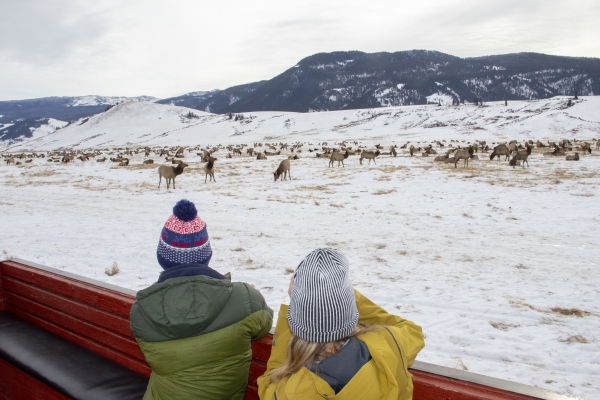 The best opportunity to observe the greatest diversity of wildlife on Modoc NWR is from April through May and September through October during morning or evening hours. Binoculars or a spotting scope can greatly help you in observing wildlife by minimizing disturbance to the animals. Your car can be a good vantage point and act as a viewing blind. A wildlife field guide will help you learn in which habitat to look for specific species.

Depending upon the season, bird populations vary greatly in abundance and diversity. Large concentrations of waterfowl visit the refuge during spring and fall migrations - a portion of these remain throughout the breeding season.  A total of 246 bird species have been observed on the refuge, including 40 accidentals. At least 76 species have been documented as nesting at Modoc with another 18 species suspected of nesting.

Learn more about what birds can be found at Modoc NWR by clicking on Species.

A wide range of mammals can be spotted on the Refuge. Their behavior and visibility changes with the seasons because some species hibernate in winter or remain out of sight in tunnels under the snow. However, many can be seen with their young in the spring and summer.

Reptiles usually live on drier sites while amphibians live in water and on land. Both hibernate in winter and are usually seen from spring through fall. Most are small reclusive animals not highly visible to the refuge visitor. Snakes can sometimes be seen crossing roadways, lizards frequent shrub uplands, turtles can be seen sunbathing in waterways, and frogs can be seen scurrying back to the water when they are disturbed.

A vast array of fascinating insects can be found flying, crawling or swimming all over Modoc NWR. Watch for dragonflies ‘hawking' over ponds looking for prey, butterflies 'nectaring' on flowers, and beetles and spiders scurrying across the ground.