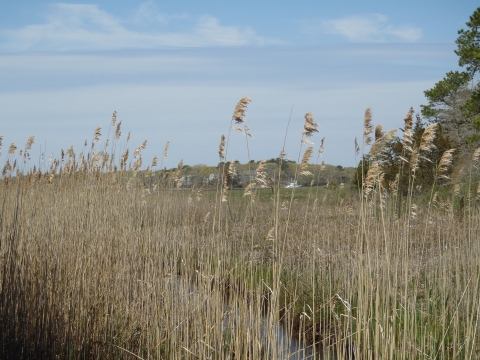 Mashpee National Wildlife Refuge located on Cape Cod Massachusetts is one of eight refuges that make up the Eastern Massachusetts National Wildlife Refuge Complex. The refuge was established in 1995 to preserve and protect natural resources associated with the Waquoit Bay area for the protection of waterfowl and wildlife. The U.S. Fish and Wildlife Service only owns a portion of the enormous refuge. Through a unique partnership among eight federal, state, tribal and private conservation groups, the refuge is managed to help conserve and protect the area’s wildlife and habitat. The refuge is named after the Mashpee Wampanoag Tribe, which encompassed the homelands of the Mashpee Wampanoag Tribe.

The Eastern Massachusetts National Wildlife Refuge Complex will contribute to the mission of the Refuge System and support ecosystem–wide priority wildlife and natural communities. Management will maximize the diversity and abundance of fish and wildlife with emphasis on threatened and endangered species, migratory birds, and aquatic resources. The Complex will have a well-funded and community supported acquisition program which contributes to wildlife conservation. The refuges will be well known nationally and appreciated in their communities. They will be seen as active partners in their communities, school systems, and environmental organizations which will result in high levels of support for the refuges. The refuges will be a showcase for sound wildlife management techniques and will offer top-quality, compatible, wildlife dependent recreational activities. Refuges open to the public will provide staffed visitor contact facilities that are clean, attractive, and accessible, with effective environmental education and interpretation.

Each unit of the National Wildlife Refuge System is established to serve a statutory purpose that targets the conservation of native species dependent on its lands and waters. All activities on those acres are reviewed for compatibility with this statutory purpose. The purpose(s) of this Mashpee National Wildlife Refuge is “for the development, advancement, management, conservation, and protection of fish and wildlife resources ...” 16 U.S.C. § 742 f(a)(4)).”

The Wampanoag are the first recorded residents in what are now called Mashpee and Falmouth and across much of what are now known as Cape Cod and southeastern Massachusetts. The tribe used the land what is now the refuge for hunting, fishing, gathering of food and medicinal plants, as well as ceremonial purposes. Check out Wampanoag Tribe History here.