Seabird Research at Kilauea Point NWR - In Partnership with USGS

Kīlauea Point National Wildlife Refuge (KPNWR) is an important seabird breeding site located at the northeastern tip of Kauaʻi in the main Hawaiian Islands. Despite the regional significance of KPNWR as one of the most important breeding sites for red-tailed tropicbirds (Phaethon rubricauda), red-footed boobies (Sula sula), and wedge-tailed shearwaters (Ardenna pacifica) in the main Hawaiian Islands, robust and accurate population surveys have not been consistently conducted and recent information is lacking. In this study, we completed comprehensive population surveys for these three species during the 2019 breeding season. Using direct censusing methods (ground-searching, visual and photographic counts), we determined that 387 red-tailed tropicbird and 5,049 red-footed booby breeding pairs nested at KPNWR in 2019. Additionally, we performed surveys of aerially displaying tropicbirds to estimate a potential population of 30 white-tailed tropicbird (Phaethon lepturus) breeding pairs at KPNWR. Using a stratified-random plot-sampling method, we estimated that 20,998 wedge-tailed shearwater pairs nested at KPNWR in 2019. The breeding population size results in this study are greater than those reported in the past for KPNWR. We suggest that the red-tailed tropicbird breeding population has increased since the mid-2000s (when population estimates were last made), whereas red-footed booby numbers likely have remained similar and 2019 results show an increase from past estimates because of the more comprehensive methods used in this study. The results of these surveys provide current and accurate population sizes for these species that can serve as (1) benchmarks for future management and monitoring at KPNWR and (2) important components of population-level assessments of seabird vulnerability to potential offshore wind energy development in the main Hawaiian Islands

In our effort to perpetuates Hawaiian ancestral knowledge, philosophies, and practices of Kaua`i, we’ve teamed up with Kaipuwai Foundation, Na Kia'i Nihoku, and Halau Palaihiwa O Kaipuwai. These organizations perform Native Hawaiian cultural practices and ceremonies at Nihoku summit on the summer and winter solstice and the spring and fall equinox. 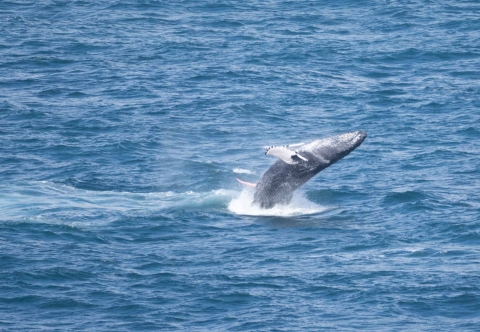 The Sanctuary Ocean Count is a signature outreach and citizen science project that offers the community – locals and visitors alike – a chance to monitor humpback whales from the shores of Oʻahu, Hawaiʻi and Kauaʻi. The count is conducted three times per year during peak whale season and provides a snapshot of humpback whale sightings from the shoreline.

The count is held the last Saturday of January, February, and March of each year from 8:00 a.m. to 12:15 p.m. The Ocean Count promotes public awareness about humpback whales, the sanctuary, and shore-based whale watching opportunities in the Hawaiian Islands. The Great Whale Count takes place on the same dates on Maui, led by the Pacific Whale Foundation.