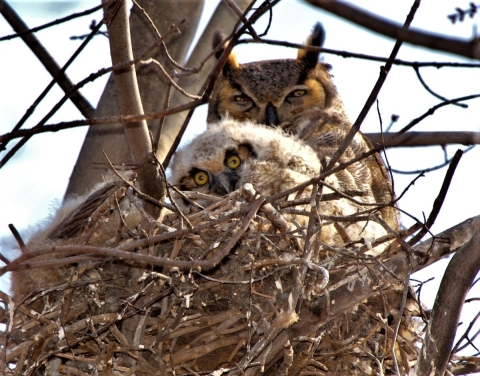 Bird migration is at its peak as songbirds, waterfowl and raptors continue to move through the refuge for points north. Bluebirds are nesting. White-tailed deer give birth to fawns.

Eaglets fledge. Turtle nesting season peaks. Spatterdock (or yellow pond lily), arrowhead and wild rice are in full growth throughout the marshes. Muskrats produce their first litters for the year. Biting deer flies hatch. In the woodland forest, the flutelike song of the Woodthrush can be heard along with the staccato “teacher, teacher, teacher” of the ovenbirds. Vernal pools have disappeared. 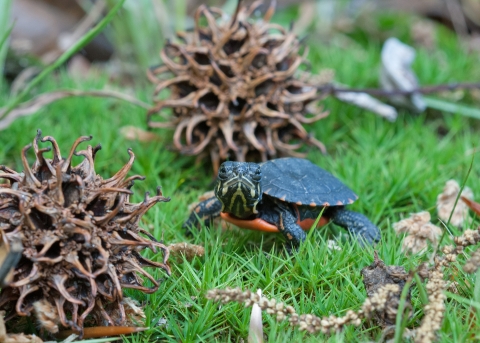 The dog days of summer have arrived. The forest is hot and humid. Micranthena spiders create inconvenient webs across trails. Crimson-eyed rose-mallow and swamp rose mallow color the marshes with white and pink.

The southerly waterfowl migration has begun. Songbird and raptor migration peaks later in the month. Monarch butterflies are on the move southward towards Mexico.

As Autumn colors the forest with yellow, orange and red, eagles begin to congregate in the region for the winter. Beech nuts litter the forest floor. The first frost can occur any day.

Elizabeth Hartwell Mason Neck National Wildlife Refuge contains a diversity of habitats that are not only favorable, but essential to the wildlife here in Virginia. The mature forest habitat that covers much of the refuge provides nesting areas for bald eagles, and is home to many different species, including the Northern flicker, barred owl, Eastern box turtle, and tree-roosting bats. The extensive wetlands and marshes throughout the refuge allow waterbird species to thrive as well. Such is the case within the 207-acre freshwater tidal Great Marsh, where stands of rice abound. Migrating ducks, raptors, and songbirds stop at the marsh to rest and feed on their long journey.

At the time of Elizabeth Hartwell Mason Neck National Wildlife Refuge’s establishment in 1969, the number of nesting bald eagles pairs had plummeted to less than 500 in the lower 48 states, prompting the bald eagle to be placed on the endangered species list. In 2007, the bald eagle was removed from the endangered species list due to significant population recovery. Even though the bald eagles have made a remarkable comeback, management of the refuge continues to focus on promoting nesting, feeding, and roosting habitat to ensure a stable future for eagles. The refuge provides ample viewing opportunities of bald eagles year-round.

During the spring and summer months, the refuge hosts one of the largest heron nesting rookeries on the Potomac River. The rookery currently supports well over 500 active nests. To help support this large breeding population of herons, water levels in the adjacent 50-acre wetland are seasonally managed via a water control structure structure
Something temporarily or permanently constructed, built, or placed; and constructed of natural or manufactured parts including, but not limited to, a building, shed, cabin, porch, bridge, walkway, stair steps, sign, landing, platform, dock, rack, fence, telecommunication device, antennae, fish…

Learn more about structure . This water manipulation is used to promote accessible foraging areas to adult and fledgling herons during the summer. Great Blue Herons can be seen on the refuge year-round foraging near marsh and wetland areas.

White-tailed deer can be found at the refuge year-round. The large population of white-tailed deer provides hunting opportunities to the public on the refuge and State Park lands in the fall. Hunting is a valuable management tool that refuge managers use to keep the herd at an ecologically sustainable level to benefit all wildlife. Although numerous at the refuge, deer are well camouflaged and can often sense humans before being seen, taking the opportunity to flee. Look for signs such as hoof tracks or antler rubs on small trees along the trails to know of their presence.