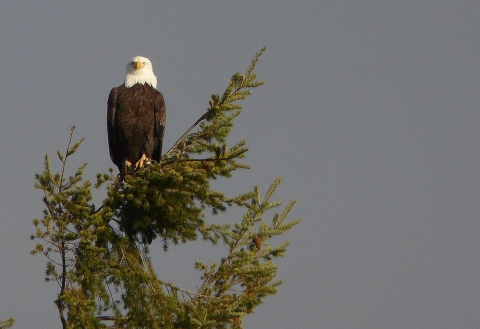 In March, as rains become less frequent, bald eagles begin nesting. Spring migrants begin to arrive; the last week in March may be the best time to see and hear spring migrant birds. Early flowering salmonberry and Indian-plum provide nectar for returning rufous hummingbirds. In April, bald eagle pair incubates eggs and chicks usually hatch later in the month. Late April and early May bring flocks of approximately 5,000 western sandpipers and dunlin to forage on delta mudflats during northward migration. The air is sweet with flowering shrubs and trees. Insects attracted to new leaves are plentiful food for songbirds. Wet and cloudy weather gives way to occasional clear days in May and ground nesting birds are underway. Bird songs fill the air as breeding begins. 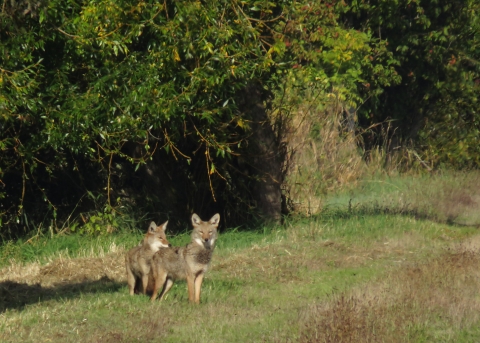 June brings dry, sunny seasonal weather and songbirds are feeding their young. Chinook salmon move up the Nisqually River to spawn in tributaries until September. Juvenile eagles are seen flying and foraging on the Refuge in July. Native woodland and forest shrubs are producing abundant fruit for wildlife consumption. Habitat management is active in August and the mowed grasslands reveal coyotes hunting down small mammals. As the freshwater wetlands are reflooded, migratory waterfowl on their southbound journey stop to feed on new growth. Shorebirds migrate southward, stopping briefly to feed on Refuge intertidal flats. 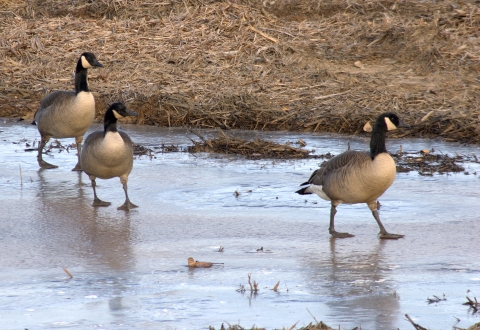 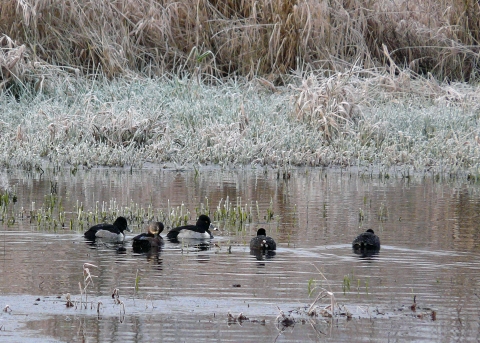 In December, it's not unusual to see 4,000-6,000 wintering geese and waterfowl in the seasonal wetlands, pastures, and estuary habitats. The earthy, sweet smell of the Pacific Northwest permeates the air.  The freshwater wetlands are fully flooded with seasonal rain by January and overwintering waterfowl are abundant. There is a peak of chum salmon in the Nisqually River and bald eagles are positioned along the river and on the Delta to take advantage of the lower tides and concentration of fish. February is the best time to observe sea ducks and black brant in the Nisqually Reach. Waterfowl are gaining their storage before migrating north. As February winds down and rains are warmer, we hear chorusing Pacific tree frogs. 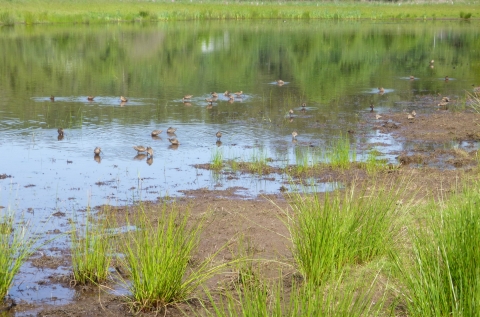 Billy Frank Jr. Nisqually National Wildlife Refuge was established to provide habitat for migratory birds. Estuary habitat is essential for migratory birds of every sort, and approximately 85% of estuarine habitat throughout Puget Sound has been destroyed by human encroachment and development; for this reason, protected lands like Billy Frank Jr. Nisqually Refuge are critical to the continued survival of migratory birds.  In addition to protecting waterfowl, the diversity of habitats that exist in a natural estuary also provide food for seabirds, shorebirds, songbirds and raptors.

There is nothing more fundamental to the mission of Billy Frank Jr. Nisqually NWR than management and restoration of habitats.  A variety of hawks, owls, and other raptors hunt in the fields and marshes. Woodpeckers, warblers and small mammals are found in the woodlands.  Shorebird flocks search for food in the mudflats while harbor seals rest in the salt marshes nearby.  Freshwater ponds provide habitat for migratory waterfowl, herons, beavers, and otters, Mixed conifer forests on the bluffs above the Delta provide perches and nesting for bald eagles.  Salmon and steelhead use the estuary for passage to upriver areas and transition to the sound.