In 1974, in recognition of the area's unique fish and wildlife resources, Billy Frank Jr. Nisqually National Wildlife Refuge was established to protect the Nisqually River Delta with approval by the Migratory Bird Conservation Commission. Approximately 2,925 acres of the 7,415 acres within the approved boundary have been acquired. Legal authorities used for the establishment of the refuge include the Migratory Bird Conservation Act and Fish and Wildlife Act of 1956.

Billy Frank Jr. Nisqually Refuge plays an increasingly important role in the protection of the Nisqually River Delta and the lower Nisqually River watershed. The refuge consists of a diverse mosaic of habitats, including salt marsh salt marsh
Salt marshes are found in tidal areas near the coast, where freshwater mixes with saltwater.

Learn more about riparian forest, freshwater wetlands, grassland, and upland forest. The refuge has international significance as a staging area, sanctuary, and migration stopover for migratory birds of the Pacific Flyway. The refuge also has regional importance as migration and rearing habitat for salmon, particularly the Nisqually River run of the federally-listed Nisqually Chinook salmon.

Learn more about National Natural Landmark Designation: The Nisqually Delta was added to the National Park Service's Registry of Natural Landmarks in June 1971. The designation was based on its significance as one of the best examples of a nationally representative river delta and estuarine ecosystem. The Delta supports one of the five highest quality known examples of Washington and Oregon salt marshes. The 4,404-acre landmark includes public and private ownerships of land, including lands of the National Audubon Society and Washington Department of Fish and Wildlife.

Nov. 11, 2009 - Completion of the largest estuary restoration project in the Pacific Northwest. In partnership with the Nisqually Indian Tribe and Ducks Unlimited, Inc., the Brown Farm Dike (constructed around 1909) was removed, returning 762 acres of estuary back to tidal influence.

The mission of the National Wildlife Refuge System is to administer a national network of lands and waters for the conservation, management, and, where appropriate, restoration of the fish, wildlife, and plant resources and their habitats within the United States for the benefit of present and future generations of Americans.

Learn more about national wildlife refuge was created for a special purpose. Some were created to protect migratory birds, others to protect threatened or endangered species or unique habitats, while others fulfill another special purpose. All activities allowed on refuges must be evaluated to make sure no activity will conflict with the reason the refuge was founded. Billy Frank Jr. Nisqually National Wildlife Refuge was established with the following purposes:

The proximity of the Nisqually Delta to two major urban centers, Tacoma and Olympia, has exposed it to numerous development threats over the years, including a deep-water port facility, an aluminum mill, and landfill.  Largely as a result of citizen efforts led by conservationist and teacher Margaret McKenny and the Nisqually Delta Association, these proposals were denied.  In 1966 and 1967, Washington Department of Fish and Wildlife purchased approximately 616 acres of delta tidelands and salt marshes to stave off development, and a Nisqually River Task Force was created to assist in preserving and protecting the river and delta. In 1971, in recognition of the significance of the area as a natural estuarine and aquatic ecosystem, the U.S. Department of the Interior designated the estuarine portion of the Nisqually River delta as a National Natural Landmark National Natural Landmark
The National Natural Landmarks Program preserves sites illustrating the geological and ecological character of the United States. The program aims to enhance the scientific and educational value of the preserved sites, strengthen public appreciation of natural history and foster a greater concern for the conservation of the nation’s natural heritage. The program was established in 1962 by administrative action under the authority of the Historic Sites Act of 1935. The first National Natural Landmarks were designated in 1963. Today, there are more than 600 National Natural Landmarks in 48 states, American Samoa, Guam, Puerto Rico and the U.S. Virgin Islands.

Learn more about national wildlife refuge .  In February 1974, in recognition of the area's unique fish and wildlife resources, the Brown Farm property and tidelands were acquired for inclusion in the National Wildlife Refuge System as Nisqually National Wildlife Refuge.  This initial purchase included 1,285 acres of diked grasslands, freshwater marshes, and tidelands funded by the Migratory Bird Conservation Commission under the authority of the Migratory Bird Conservation Act.  Three other funding sources include appropriations authorized by the Wetlands Loan Act, import duties collected on arms and ammunition, and receipts from the sale of refuge admission permits. On December 18, 2015, the refuge was renamed to honor Billy Frank Jr., a Nisqually Tribal leader (Public Law 114-101). 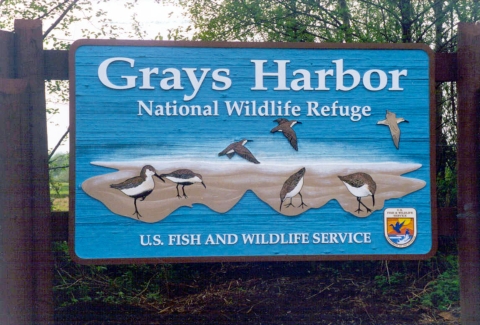 Located in Hoquiam, Washington, approximately 56 miles east of Olympia, the refuge is known for the large concentration of migratory shorebirds, especially in spring months as they travel north to breeding grounds. The Grays Harbor estuary was designated a hemispheric reserve by the Western Hemisphere Shorebird Reserve network and is one of six major stopover areas between Alaska and South America. The Sandpiper Trail is open year-round and offers closer views to witness hundreds of thousands of shorebirds foraging, resting, and evading aerial predators. 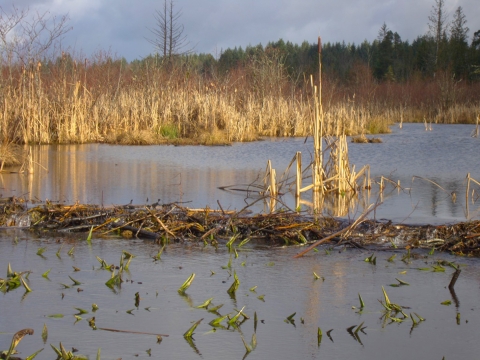 Located southwest of Olympia, the unit was established to protect the Black River watershed for biological diversity. We enhance and manage unique wetland and riparian riparian
Definition of riparian habitat or riparian areas.

Learn more about riparian ecosystems for the benefit of anadromous salmonid production and rearing, for migratory and resident birds, and for other wetland-dependent wildlife.