Image Details
Grays Harbor National Wildlife Refuge, in Hoquiam, Washington, is part of the Grays Harbor Estuary, one of six major estuary systems on the Pacific Coast and one of the largest concentrations of shorebirds on the west coast, south of Alaska. The intertidal flats, salt marshes, and open water provide essential habitat for a diversity of fish and wildlife, especially for hundreds of thousands of shorebirds during spring migration. The estuary is bordered by willows and deciduous woodlands of alder and cottonwood that are ideal for migratory songbirds. 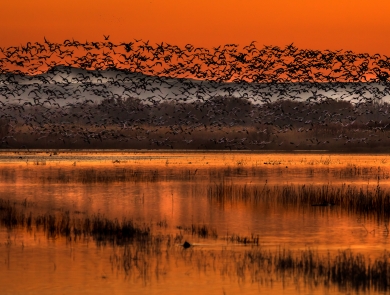 Wildlife Wonders
Bird Festival Planner
For a wonderful nature show, it’s hard to beat a bird festival. Some of the best bird fests occur at or near national wildlife refuges. That’s not surprising, given that these public lands are such birdy places.
Mar 29, 2022
View All News

Grays Harbor National Wildlife Refuge, is a hidden gem located along the northeastern edge of Grays Harbor estuary in Hoquiam, Washington, adjacent to Bowerman Airfield. The refuge at Bowerman Basin occupies only two percent of the intertidal habitat but hosts up to 50% of the migrating shorebirds in spring. The Sandpiper Trail extends into the salt marsh salt marsh
Salt marshes are found in tidal areas near the coast, where freshwater mixes with saltwater.

Learn more about salt marsh and offers exceptional opportunities to view and photograph shorebirds then meanders through a tunnel of alder and cottonwood for glimpses of various songbirds. Native plants, including Lyngby's sedge in the marsh, salmonberry, and red elderberry is ideal food resources for migrating and breeding wildlife.

Grays Harbor Estuary was acknowledged as crucial habitat for shorebirds in the early 1980’s and with the consolidated grassroots efforts and vision by private citizens, the Grays Harbor National Wildlife Refuge was authorized by Congress in 1988. The Refuge was established with the first land acquisition in 1990 and currently encompasses almost 1,500 acres of intertidal flats, open water, salt marsh salt marsh
Salt marshes are found in tidal areas near the coast, where freshwater mixes with saltwater.

Learn more about salt marsh , and forested habitats. Although small in acreage, maintaining the diversity of habitats supports abundant and diverse wildlife species.

The National Wildlife Refuge System is a network of lands and waters managed by the U.S. Fish and Wildlife Service. Wildlife conservation is at the heart of the refuge system. It directs our decisions and actions from the purpose of the refuge establishment, to the recreational activities we provide, and the resource management tools we use. The management tools used are aimed at ensuring a balanced conservation approach where both wildlife and people will benefit.

There is nothing more critical to the establishment of healthy animal communities than habitat. At the Refuge, at least four distinct natural habitats work together to create a richness of biodiversity rare even for the Pacific Northwest: estuary, open salt water, saltmarsh, and mudflats. About two dozen species of shorebirds use the Refuge during spring and fall. The five most abundant species are western sandpipers, dunlin, short-billed and long-billed dowitchers, and semipalmated plover. Western sandpipers and dunlin comprise 80% of the shorebirds present in the spring.  Eelgrass beds and marshes covered with sedges and grass seeds benefit waterfowl, particularly dabbling ducks with highest abundance among American widgeon (nearly 60%), mallards (16%), green-winged teal (10%), and northern pintail (3%). Over 54 species of landbirds have been observed at Grays Harbor Refuge, most making use of the forest and tall shrubs and grasses along the margins of the Refuge. Three species of fish listed as threatened potentially occur at the Refuge: green sturgeon, eulachon, and bull trout.

Whether you want to further conservation, learn more about nature or share your love of the outdoors, you've come to the right place! The U.S. Fish and Wildlife Service at Billy Frank Jr. Nisqually National Wildlife Refuge needs you - your talents, your enthusiasm, and some of your time. If you enjoy working with people, and appreciate and concerned about our nation's natural resources, our program may interest you.

The refuge prioritizes projects that contribute to the enhancement, protection, use, preservation, and management of native wildlife populations and their habitats in their natural diversity. Research and studies that provide scientific data upon which decisions regarding management may be based are of value to maximize our efforts for wildlife.