There is a lot of seasonal movement of fish and wildlife within the Refuge from caribou to birds and fish. Birds migrate from all over the world to breed and feed each summer, while fish like Dolly Varden move between the sea and perennial springs within the refuge seasonally to feed, breed, and overwinter.

Arctic Refuge is home to all three species of North American bears (black, brown, and polar). It's home to the Porcupine caribou herd, the Central Arctic caribou herd, muskox, Dall sheep, wolves, and wolverines. Over 200 bird species from all 50 states and all over the world flock to Arctic Refuge to nest, rear their young, and feed. Dolly Varden char thrive here, including a relatively small resident form and a large salmon-sized anadromous form (thanks to perennial springs that stay unfrozen year-round). 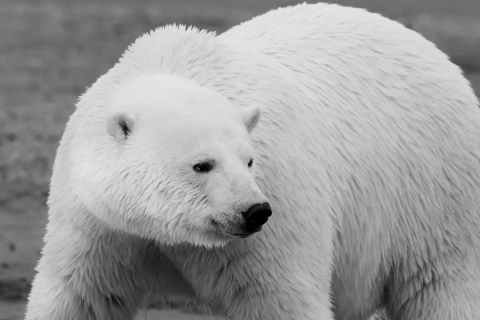 Learn more about conservation area in the circumpolar arctic, and includes the only arctic coastal habitats within the system of federal conservation lands. On the northern boundary of the refuge, barrier islands, coastal lagoons, salt marshes, and river deltas provide habitat for migratory waterbirds, including sea ducks, geese, swans, and shorebirds. Fish such as Dolly Varden and arctic cisco swim in nearshore waters. Caribou herds seeking relief from summer biting insects and polar bears hunting seals travel along coastal lands and sea ice.

The arctic coastal plain stretches southward from the coast to the foothills of the Brooks Range. This area of rolling hills, small lakes, and floodplains of north-flowing, braided rivers is dominated by tundra vegetation, consisting of low shrubs, sedges, and mosses. Caribou travel to the coastal plain during June and July to give birth and raise their young. Migratory birds and insects flourish here during the brief arctic summer. Tens of thousands of snow geese stop over on the coastal plain during September to feed prior to migrating south, and muskoxen live here year-round.

South of the coastal plain, the mountains of the eastern Brooks Range rise to over 9,000 feet. This northernmost extension of the Rocky Mountains marks the continental divide, with north-flowing rivers emptying into the Arctic Ocean, and south-flowing rivers joining the great Yukon River. The rugged mountains of the Brooks Range are incised by deep river valleys, creating a range of elevations and aspects that support a variety of low tundra vegetation, dense shrubs, and even groves of poplar trees on the north side and spruce on the south. During summer, peregrine falcons, gyrfalcons, and golden eagles build nests on cliffs. Harlequin ducks and red-breasted mergansers float on swift-flowing rivers. Dall sheep and wolves are active all year, while grizzly bears and arctic ground squirrels are frequently seen during summer but hibernate in winter.