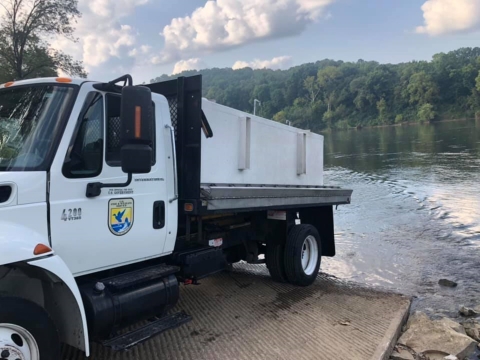 Norfork National Fish Hatchery was established to raise trout for restocking areas impacted by construction of dams, primarily in the tailwaters of Norfork and Bull Shoals.  The hatchery is responsible for raising three kinds of trout: Rainbow, Brown, and Cutthroat.  The hatchery receives fertilized eggs from other hatcheries in special shipping containers.  When the eggs arrive at Norfork they are placed into large hatching jars.  The eggs will begin to hatch in approximately two weeks after they are placed into the hatching jars.

After the eggs hatch they are placed in aluminum troughs or tanks, where they will stay until they are about 2-3 inches long (about 3-4 months old).  after the fish reach this size they are placed in the raceways outside where they continue to grow until they are large enough to stock.  This happens when they reach 11 inches in length (about 22 months).   When the fish are small they are fed 5-6 times a day and they will be fed only about three times a day just before being harvested and stocked.  hatchery fish are raised, harvested and stocked year-round.