A weight is being lifted from Southeast Alaska’s Good River in Gustavus, Alaska — both literally and figuratively.

Ice once marched down Glacier Bay, just north. The glacier began to retreat after the mid-1700s and meltwater carried sediment out to sea like a fan. A broad glacial outwash plane was formed. It would become the site of Gustavus — located within the homelands of the Xunaa Łingit and the gateway to Glacier Bay National Park. Major rivers now include the Salmon and Good — relative newcomers on a geological timescale. And the land around them is gaining in elevation quickly.

Uplift rates due to isostatic rebound following glacial retreat in Glacier Bay are the fastest in the world, with the land around Glacier Bay gaining about an inch of elevation per year. That uplift causes streams to cut deeper into the outwash fan and road culverts to become perched above the streambed. This creates an impasse for fish when they encounter the road.

An interesting vantage point to notice the gradual change is to step in a stream and look upstream into an outdated road culvert:

John Hudson remembers the first time he stepped in a tributary to the Good River in 2010. Traveling along Mountain View Road, he had just been hired by the U.S. Fish and Wildlife Service and tasked with helping deliver the Service’s National Fish Passage Program in Southeast Alaska.

“I pulled over and saw a perched culvert and said “holy cow, there’s a fish passage project. Dang there is a lot of work to do here.”

Learn more about Bipartisan Infrastructure Law funding for the final bridge. In its entirety, the price tag for reconnecting the Good River’s watershed totals $1.76 million dollars.

Freight to unroaded Southeast Alaska mostly comes from the Lower 48 by barge. So the final 60-foot glulam timber bridge — all 65,000 pounds of it — left the Seattle docks on a giant flatbed trailer via Alaska Marine Lines barge on August 26th, 2022. Oblivious to the beauty of its surroundings, it would first make its way up through the Inside Passage between heavily forested islands and past little coastal fishing communities and mountains that rise abruptly from deep fjords. And then in Juneau, it would transfer to the Alaska Marine Highway ferry MV LeConte to begin its final journey to Gustavus.

It’s a west coast bridge through and through, with West Coast Douglas Fir cut, milled, waterproofed, treated and fabricated by Western Wood Structures in Oregon. Its aesthetics are a tribute to the Southeast Alaska setting where it will span waters many fish depend upon.

With the setting of this final bridge, Pacific salmon, Dolly Varden Char, and Coastal Cutthroat Trout will be free of migration barriers throughout the entire Good River and its tributaries.

A Return on Investment

Many Gustavus residents like to fish for Pink and Coho salmon in the local rivers and also at sea. And fish are woven into the fabric of life in Southeast Alaska. Mayor of Gustavus, Mike Taylor, reflects on the effort — one he has been committed to helping move forward through eight years on the City Council and three as Mayor.

“Salmon are central to the Gustavus economy and lifestyles, and a growing community needs safer and more-serviceable roads.  Replacing failing, fish barrier culverts at hazardous stream crossings with safe, barrier-free bridges is a win for people and the environment. We are most grateful to the U.S. Fish and Wildlife Service and our other funding partners for their support of the Gustavus Fish Passage Improvement Project.”

This work wouldn’t have been possible without committed partners and funders: Alaska Legislative Capital Improvement Program, Bipartisan Infrastructure Law, City of Gustavus, National Fish and Wildlife Foundation, National Oceanic and Atmospheric Administration, Southeast Alaska Watershed Coalition, State of Alaska/Department of Fish and Game, Sustainable Salmon Fund, Trout Unlimited, and the U.S. Fish and Wildlife Service’s Partners for Fish and Wildlife Program and National Fish Passage Program. Thank you to Mayor Taylor and to the staff and council of the City of Gustavus for their support and commitment to restoring fish passage to the Good River watershed.

Thank you to Andy Stevens, John Hudson, and Mike Taylor for their insights and review. 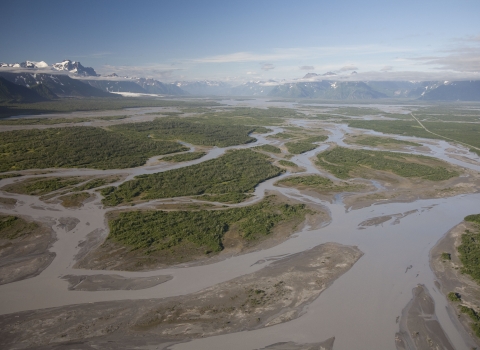 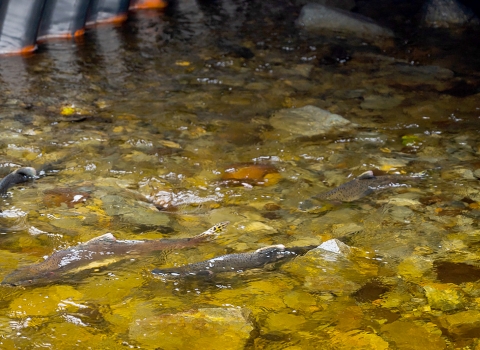 Habitat Restoration
Back to School