Salmon, steelhead and other aquatic species in the Pacific Northwest recently got some great news.

With a total of $200 million in investments in the National Fish Passage Program over the next five years, the Bipartisan Infrastructure Law will bolster efforts to address outdated, unsafe or obsolete dams, culverts, levees and other barriers fragmenting our nation’s rivers and streams, which will help restore fish passages and aquatic connectivity.

Millions of obsolete or poorly designed dams, roads, and levees in the U.S. keep fish and other aquatic species from moving freely to feed, migrate and reproduce. Fish passage barriers not only fragment aquatic habitats, they are also often more susceptible to impacts from climate change climate change
Climate change includes both global warming driven by human-induced emissions of greenhouse gases and the resulting large-scale shifts in weather patterns. Though there have been previous periods of climatic change, since the mid-20th century humans have had an unprecedented impact on Earth's…

Learn more about climate change . The National Fish Passage Program works with local communities on a voluntary basis to remove barriers and restore rivers for the benefit both fish and people.

Since 1999, the Service’s National Fish Passage Program has:

· Reopened access to 57,736 miles of upstream habitat for fish and other aquatic organisms

· Reopened access to 193,783 acres of wetland habitat for fish and other animals

· Worked with over 2,000 partners across the country

Find out more details about each of the 10 projects in the Pacific Northwest at the links below. 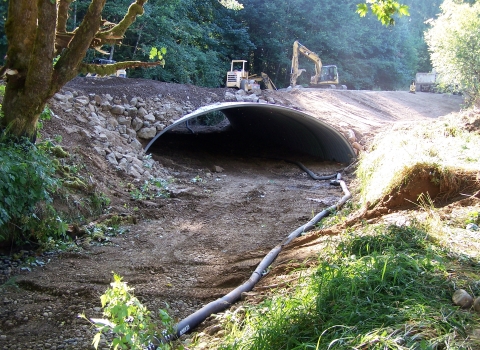