Winter: As cold weather settles in, wildlife activity slows on the surface of Plum Tree Island NWR. Black ducks rest after their journey south, foraging the protected marshland and courting mates. Tide pools set beyond the reaches of tidal shifts serve as pockets of refuge for small crustacea and mummichog, also serving as a food source for many shorebirds hunkering down on the island. Many species on and around the marshland (like fiddler crabs and snails) bury themselves in mudflats rich with decaying plant matter, waiting to emerge in warmer weather.

Spring: In spring, the buffering salt marsh salt marsh
Salt marshes are found in tidal areas near the coast, where freshwater mixes with saltwater.

Learn more about salt marsh habitat provides nursery and refuge grounds for striped bass, croaker, and juvenile invertebrates like crab and grass shrimp. A variety of small crustaceans and insects find their way to the refuge, feasting on the plant matter that died back during winter. Osprey appear, diving for small shallow-water prey while clapper rails forage and nest among the tall cordgass. Green color returns to the cordgrass and other marshland vegetation as a rich cycle of new growth begins.

Summer: Juvenile fish and shellfish continue to spend the warm months utilizing the refuge’s food supply, shelter and spawning habitat. Diamondback terrapins come ashore to forage and lay clutches of eggs in the warm sand of Plum Tree’s dunes, and seaside sparrows are abundant around the island.

Fall: A rich symphony of birdsong can be heard throughout the marshland year-round, particularly in Fall as approaching winter weather brings migratory birds to the refuge’s shores. Like the leaves of inland trees, salt marsh vegetation changes from deep greens to stunning golds and reds. 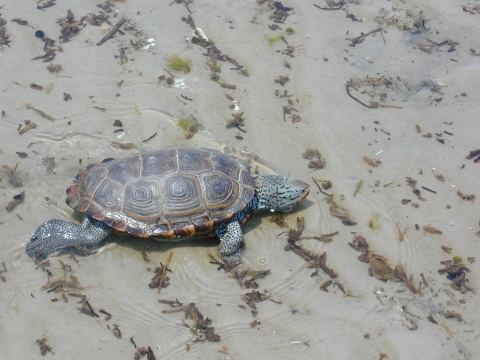 Frequenting the tranquil waters, marsh, and shoreline of the refuge is the Northern Diamondback Terrapin. The reptile’s skin is olive colored with black specs and its shell is decorated with numerous angular rings. This distinctive shell pattern was the reason the terrapin was given the “diamondback” name. The terrapin spends much of its time in the waters hunting for food (small shellfish, worms, and plants), but also comes ashore particularly to lay eggs. The base of sand dunes provide ideal habitat for depositing a clutch of eggs, which ensures this prehistoric creature has the chance to survive for future generations. 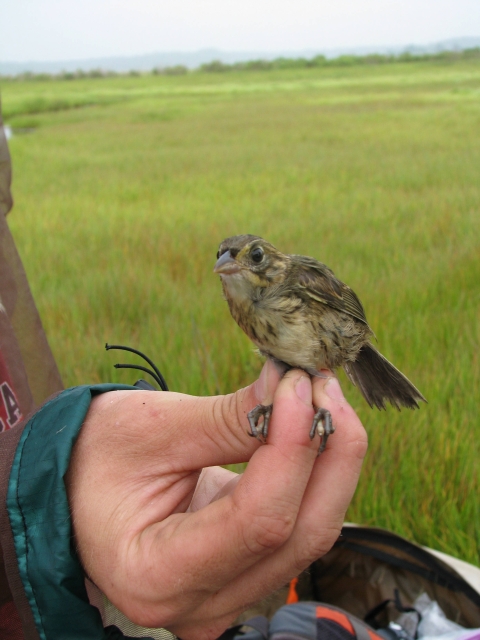 This six-inch, dark, olive-grey sparrow, as its name suggests, prefers coastal marsh habitat. The relatively non-descript bird can best be identified by a small yellow patch before the eye. With the help of its large feet (comparable to other sparrows) the Seaside Sparrow is able to forage effectively in the mud of the salt marsh salt marsh
Salt marshes are found in tidal areas near the coast, where freshwater mixes with saltwater.

Learn more about salt marsh . Joining hundreds of other bird species that use the refuge (including a diverse group of waterfowl and waterbirds), this sparrow is a neo-tropical migrate, which means it returns each year during warmer months. The bird has been identified as a Bird of Conservation Concern due to unsustainable coastal development and limited undisturbed habitat. 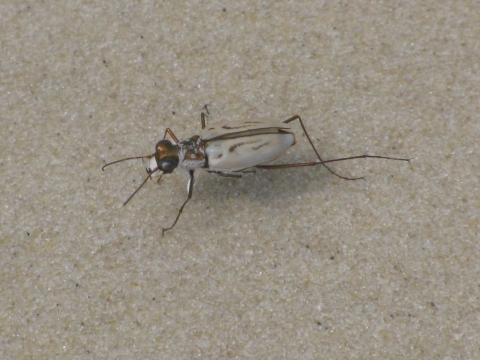 During the spring and summer the tiny Northeastern Beach Tiger Beetle actively searches for food along the tranquil intertidal zone and upper beaches of Plum Tree Island NWR. The Federally Threatened beetle depends on undisturbed beach habitat for survival. The historic range of the invertebrate extended from the Chesapeake Bay to Massachusetts. However, over the centuries, beaches have been increasingly developed and now few offer the serenity the beetle requires to survive as larvae, and then in adulthood to forage and breed. Plum Tree Island NWR serves as one of the southern-most locations within the beetles’ range, thus making it an important species for evaluating possible climate change climate change
Climate change includes both global warming driven by human-induced emissions of greenhouse gases and the resulting large-scale shifts in weather patterns. Though there have been previous periods of climatic change, since the mid-20th century humans have had an unprecedented impact on Earth's climate system and caused change on a global scale.