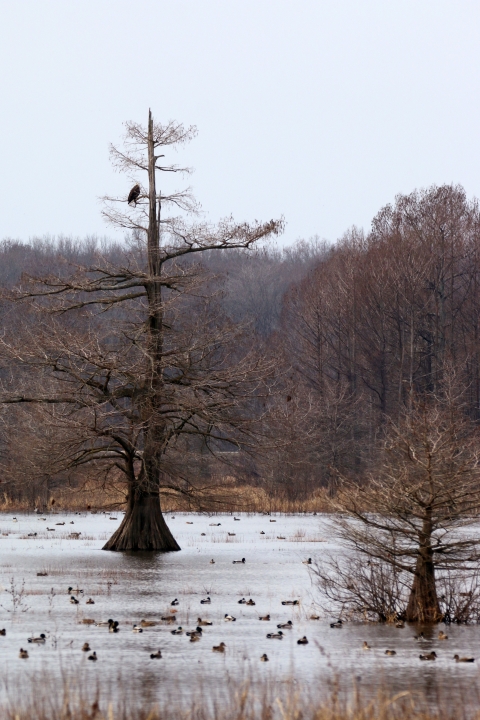 Mingo National Wildlife Refuge was established in 1944 under the authority of the Migratory Bird Treaty Act as a resting and wintering area for waterfowl and other migratory birds, and for the preservation of bottomland hardwood forest.

Learn more about wilderness area designated as wilderness by Congress under the 1964 Wilderness Act to “…protect and preserve the wilderness character…for the use and enjoyment of the American people in a way that will leave these areas unimpaired for future use and enjoyment as wilderness.” Hunting, fishing, hiking, wildlife observation and wildlife photography are encouraged in the wilderness area. The Mingo Basin is recognized as a global priority Important Bird Area by the Audubon Society as the refuge supports bird species and habitats that are of conservation priority.

Abundant wildlife has attracted hunters for as long as 7,000 years and artifacts indicate the land was inhabited by the Quapaw, Osage, Shawnee, Delaware and Mingo tribes. Native Americans were attracted to the basin’s habitat, rich and abundant with wildlife resources. This is evident by cultural resources discovered on the refuge. Settlers also exploited the Mingo Basin.

By 1890, the vast cypress and tupelo forests fueled a booming lumber industry that ultimately led to the harvesting of nearly all the trees within the refuge’s present boundary. In the wake of disappearing forests, large drainage ditches were etched throughout the swamp to prepare the land for farming. The expensive undertaking proved only partially successful and sharply contrasted with other drainage projects in southeastern Missouri, which effectively drained hundreds of thousands of acres of hardwood swamplands. The combination of a depressed economy, expensive drainage attempts, poor farming practices, over-grazing and numerous fires quickly brought economic and ecological bankruptcy to the Mingo area during the Great Depression. By the 1930s, the long-term, improper land use of the basin’s natural resources prompted renewed interest in preserving the swamp. Purchase of land for the refuge began in 1944.

Learn more about national wildlife refuge was created for a special purpose. Some were created to protect migratory birds, others to protect threatened or endangered species or unique habitats, while others fulfill another special purpose. All activities allowed on refuges must be evaluated to make sure each activity will not conflict with the reason the refuge was founded.

The primary purpose of Mingo National Wildlife Refuge is to provide food and shelter for migratory waterfowl and to protect the bottomland hardwood forest.

Native Americans were attracted to the swamp because of the abundant wildlife. Most likely, the Native American occupation was seasonal and related to hunting opportunities in the swamp. Water-loving animals, such as beaver, river otter, raccoons, and rabbit thrived. White-tailed deer, wild turkey, ruffed grouse and timber wolves were common on the edges of the swamp and nearby bluffs.

In 1804, the Louisiana Purchase acquired this territory for the United States. At that time, the population of the entire Bootheel was very low and the swamp area that is now the refuge was considered inaccessible.

Settlers first approached the swamp because of its extensive old-growth cypress and tupelo forests. The giant cypress trees were the first to be felled and converted into railroad ties and building lumber. The T.J. Moss Tie Company was a large Bootheel lumbering operation headquartered in Puxico.

By 1888, T.J. Moss was the largest tie contractor in the state, and many of their ties were cut from trees taken from the Mingo swamp. A large saw-mill was operated just north of Puxico on land now within Mingo NWR. Production of the Bootheel lumber industry peaked between 1900 and 1910. During its peak, the Bootheel was consistently the leading lumber-producing area of Missouri. However, by 1935 most of the large operations had ceased. The giant trees had been removed and it was necessary to find suitable lumber in other places.

While most of the lumber had been removed the powerful and wealthy lumber companies had not lost interest in the Bootheel. If the swampy land could be drained, it could once more become an important source of revenue. The lumber companies had considerable capital to invest, but demanded large grants of land for the drainage and were frequently more interested in the land than in efficiency of their drainage ditches. The State Legislature passed an act that allowed the formation of drainage districts, financed by long-term bonds. For the first time, drainage projects could be adequately financed and many drainage districts were created in the Bootheel.

In 1914, more than 20 drainage districts existed in Stoddard County. One of them was the Mingo Drainage District, a small district in the Advance Lowlands near Puxico. More than $1 million was spent to make Mingo Swamp suitable for farming. A system of seven major north-south ditches was constructed to drain water from the swamp into the St. Francis River, about 10 miles south of Puxico. Except for the narrow southern extension of the district south of Puxico, the Drainage District's boundary and the Mingo NWR boundary are essentially the same. The ditches constructed by the District are used today by the refuge for water control and management.

During the Great Depression, land values plummeted and many of the large landholders (lumber companies) defaulted on payment of taxes rather than continue to maintain unprofitable investments in the land. Throughout the Bootheel, many drainage districts were unable to meet financial obligations and defaulted on bond payments, largely because they couldn't absorb the loss of revenue created by the large landholders. Mingo Drainage District was one of these.

Drainage attempts on the Mingo Swamp had not been completely successful, at least in part because of the overflow from the St. Francis River. Also, the soil was not as productive as some of the other areas of the Bootheel. During the 1930's, the Mingo Drainage District became insolvent.

The remaining timber was cut by anyone without regard to ownership and the area became open range country where cattle and hogs roamed freely across the entire swamp. To maintain this grassy condition, the land was burned frequently, as much as several times a year. Hogs and cattle became so numerous that they overflowed into the small towns near the swamp. Indiscriminate shooting of waterfowl was common. Other wildlife species were also not faring well as beaver and deer had disappeared and the wild turkey was nearly extirpated from the swamp.

In 1944, the U.S. Fish and Wildlife Service purchased 21,592 acres of the Mingo Swamp and established the Mingo National Wildlife Refuge. The condition of the land and its living resources was deplorable. Over the previous half-century, humans had reduced a beautiful swamp, lush with the growth of plants and alive with animals, into a burned and eroded wasteland. Through careful management, most of the natural plants and animals were restored. Native trees have replaced much of the brush and briers, and a canoe trip down the Mingo River will now reveal little to the casual observer of the abuses to which this was subjected in years past. Deer, wild turkey, bobcat and beaver are once again plentiful and the refuge is now able to pursue its primary purpose: providing food and shelter for migratory birds.

1947 - First office and headquarters opened in the town of Puxico

1976 - Visitor center completed and opened to the public

Learn more about wilderness area within the refuge is established

1967 - First hunting seasons held since the establishment of the refuge

2014 - Current visitor center completed and opened to the public