Image Details
Medicine Lake National Wildlife Refuge is located on the heavily glaciated rolling plains of northeastern Montana, between the Missouri River and the Canadian border. The Refuge, established in 1935, provides important breeding and stopover habitat for a diverse array of migratory birds. 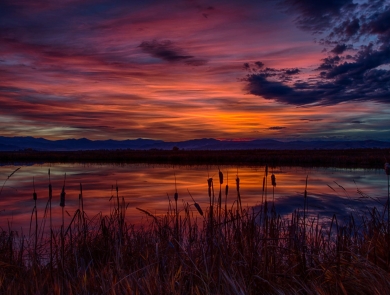 Our Partners
Common Ground, Sacred Bonds
In partnership with the Confederated Salish and Kootenai Tribes and the Fort Peck Tribes, new signs have been installed at Ninepipe, Pablo, and Medicine Lake National Wildlife Refuges in Montana that reflect the languages of the first people who roamed the Americas.
Nov 9, 2021

The primary role of the refuge is to conserve its diverse wetlands and grasslands as a refuge and breeding ground for migratory birds and other wildlife. Grassland nesting species such as the chestnut collared longspur, Baird’s sparrow, McCown’s longspur and grasshopper sparrow thrive on the refuge. The refuge’s large pelican colony has been in existence since at least 1939 and is one of the largest colonies in the United States, with about 3,000 to 5,000 nest each year.

The Refuge lies within the highly productive Prairie Pothole Region of the Northern Great Plains.  As is typical of what is known as "glacial drift prairie," the Refuge has relatively gentle rolling plains and numerous shallow wetlands. The Refuge encompasses 31,660 acres in Sheridan and Roosevelt counties, and includes about 13,010 acres of open water and marsh, 14,890 acres of native prairie, and 3,760 acres of previously cultivated lands now maintained mostly in perennial grass plantings. Most of the surrounding private land is intensively farmed for small grain.

The Refuge consists of two separate tracts of land. The main tract includes the 8,218-acre Medicine Lake, five smaller lakes, and numerous potholes. The smaller tract lies to the south of the larger one, and contains the 1,280-acre Homestead Lake. Within the main tract of the Refuge, the 11,360-acre Medicine Lake Wilderness was established by Congress in 1976. This area includes the main water body of the lake, the islands within, and the 2,320-acre Sandhills Unit. The Sandhills Unit includes rolling hills, native grass, brush patches, and a few relic stands of quaking aspen. The wilderness portion of the lake is located on the east side of Montana state highway 16. The Sandhills Wilderness area is located southeast of the main lake along Lakeside Road.

The current refuge road system consists of 50 miles of designated roads; 31 miles are classified as administrative roads, and 19 miles are classified as open to the public roads.  A 14 mile auto tour route, Wildlife drive, is located on the refuge. This route is passable by passenger vehicles approximately eight months out of the year.

A 99-foot-high observation tower is located at the refuge complex office site. It provides visitors a unique vista to the western half of the refuge. It is open most of the year, but closes as climatic conditions prohibit the climbing the 135 steps to the top.  The tower is currently closed as it is going through some renovations and safety updates.

The Environmental Education Area is located off of Montana State Highway 16.  A 0.25 mile road leads to a mowed grass loop with benches, interpretive signs, lake access. hiking trails and an outdoor restroom,

The Pelican Overlook site is located at the end of the 1.2 mile vehicle trail leading to Bridgerman Point.  An elevated platform overlooks a breeding colony of pelicans, cormorants and herons.  All season fixed binoculars are provided on the deck for observation.

The refuge complex provides breeding and migration habitat for a diverse group of bird species. Medicine Lake National Wildlife Refuge has been designated one of the top 100 Globally Important Bird Areas in the United States by the American Bird Conservancy.

The importance of this area to breeding and migrating waterfowl has long been recognized and was the primary reason for the purchase of the refuge. The density of breeding duck pairs is the highest in the Missouri Coteau. Most common nesting ducks are mallard, gadwall, northern pintail, northern shoveler, blue-winged teal, a total of 14 species breeding locally. The wetlands provide habitat for many colonial-nesting water-birds, including western and eared grebes, California and ring-billed gulls, double-crested cormorants, great blue herons and American white pelicans.

Sharped-tail grouse are one of the few native prairie birds that are year round residents.

Research projects on the Refuge take place in all seasons and range from working with fish and wildlife to their different habitats. Research and projects are designed to inform management in making the best possible decisions for wildlife and wildlife habitat.