Image Details
Nestled between the Blue Mountains and the plains of eastern Oregon, McKay Creek National Wildlife Refuge is an aquatic oasis. Supporting a high diversity of wildlife, the refuge provides sanctuary to breeding and migratory birds in an otherwise arid and sparse desert environment. The refuge serves as a recreational mecca for residents of nearby Pendleton, Oregon, receiving over 50,000 visitors annually. The majority of visitors engage in fishing. Upland bird hunting is also popular, with many area hunters taking part in the annual pursuit of pheasant and quail. Other visitors simply enjoy bird watching, wildlife photography, or nature. 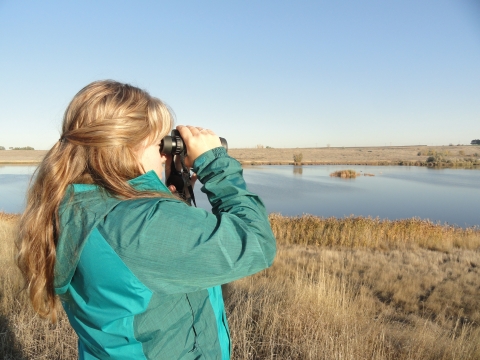 There are lots of fun, interesting and educational things you can do on the refuge. Keep in mind, if an activity is not wildlife-related and doesn’t help in the protection or understanding of wildlife or their habitat, there are probably refuge rules governing this activity. Please check with refuge management, or consult our publications, before participating in an activity that could harm the environment or yourself. There are plenty of other activities on McKay Creek for you to enjoy. Be safe and have fun! 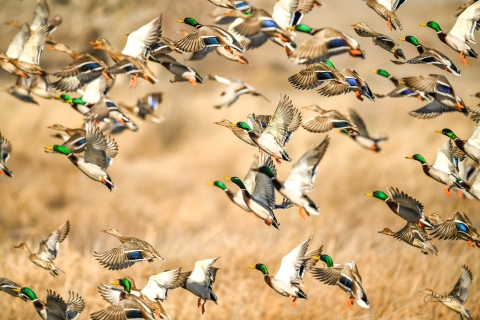 In the early 1900s, may people across the nation recognized that populations of migratory birds and other wildlife were dwindling. Thus, a strong national conservation movement developed and brought forth the establishment of wildlife preserves across the country in an effort to boost wildlife populations. As a result, McKay Creek National Wildlife Refuge was established by President Calvin Coolidge on June 7, 1927, as "a refuge and breeding ground for birds."

The 1,837-acre refuge overlays McKay Creek Reservoir, a U.S. Bureau of Reclamation (BOR) storage facility, serving the irrigation needs of the Umatilla River Basin. The U.S. Fish and Wildlife Service manages the lands, whereas the water levels are regulated by the BOR. At full pool the refuge consists of 1,300 acres of water and 537 acres of upland. By late September, an average of 250 acres of water remain at minimum pool. The reservoir relies entirely on run-off from the Blue Mountains feeding McKay Creek, so in poor snow years, the water supply can be limited; full pool has usually been reached, but this is a consideration in the face of climate change climate change
Climate change includes both global warming driven by human-induced emissions of greenhouse gases and the resulting large-scale shifts in weather patterns. Though there have been previous periods of climatic change, since the mid-20th century humans have had an unprecedented impact on Earth's climate system and caused change on a global scale.

Learn more about national wildlife refuge isn't all about the glamour of releasing wolves or visiting remote wilderness. In fact, very little of it is. Most of the work involves managing the habitat. It's about clearing vegetation from water control structures and pulling invasive species invasive species
An invasive species is any plant or animal that has spread or been introduced into a new area where they are, or could, cause harm to the environment, economy, or human, animal, or plant health. Their unwelcome presence can destroy ecosystems and cost millions of dollars.

Learn more about invasive species . It's about running backhoes and cutting trees. It's about create the special conditions so that others can visit remote wildernesses and see wolves.

At McKay Creek NWR, our biggest concern is management of invasive species, such as yellow starthistle. However, due to staffing and funding levels, there is very little active management ongoing. Sometimes, sensitive areas are closed to the public so that the land can recover more quickly.

More About What We Do
View Our Species
View Our Library 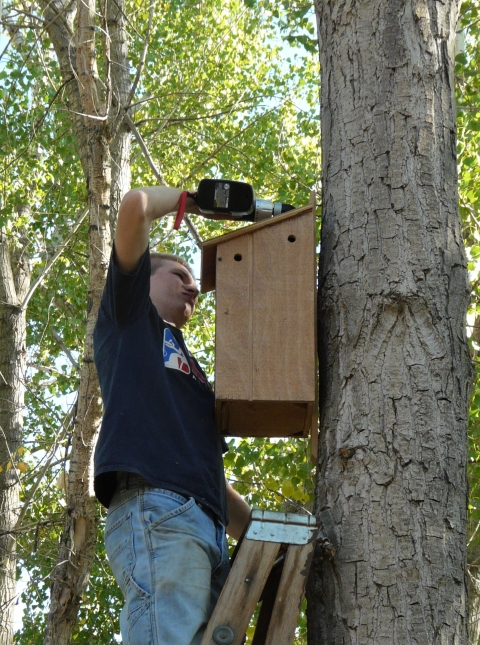 From its start in 1903, the National Wildlife Refuge System   has owed its very existence to concerned citizens eager to protect America's natural resources. More than 200 nonprofit Refuge Friends organizations support national wildlife refuges, whether they work with a single refuge, a refuge complex or an entire state. Friends members are crucial to conserving and protecting our nation’s wildlife and teaching millions of Americans that their actions today determine the conservation legacy of tomorrow. More than 42,000 people volunteer their time and ideas each year to the U.S. Fish and Wildlife Service. Whether they work on the land, in a visitor center or with youth, they contribute to the conservation mission that reaches back more than a century. Become a volunteer or Refuge Friend to contribute your strength on behalf of America’s natural resources.