The Hawaiian Islands National Wildlife Refuge includes some of the most remote islands and atolls on the planet extending 1,200 miles northwest of the island of O‘ahu in the Hawaiian archipelago. This refuge hosts a rich, varied, and genetically unique natural, cultural, and historic legacy of global significance and importance.
CORONAVIRUS (COVID-19) NOTICE 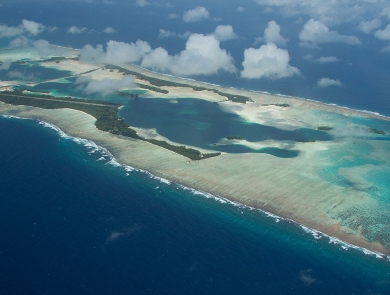 Wildlife Management
"Hope Spots" in the Ocean
The U.S. Fish and Wildlife Service is partnering with the National Oceanic and Atmospheric Administration, state and territorial governments and others to conserve the ocean and remote islands and atolls in it. The two federal agencies cooperatively manage four marine national monuments in the...
Jun 15, 2022
View All News

Learn more about marine national monument , you can virtually navigate through some of the islands that make up the Hawaiian Islands National Wildlife Refuge and other areas of Papahānaumokuākea Marine National Monument.

See Activities section under "Visit Us" for more information.

Described as hosting "Alaskan sized resources on a mere 245,000 acres" the Refuge provides essential breeding grounds and nesting sites for endangered, threatened, and rare species some found nowhere else on the planet. On June 15, 2006, the Hawaiian Islands National Wildlife Refuge, along with Midway Atoll National Wildlife Refuge and Kure Atoll State Wildlife Sactuary was designated as Papahānaumokuākea Marine National Monument. In 2010, the Monument was inscribed as a United Nations Educational, Scientific, and Cultural Organization World Heritage Site and in 2016 the Monument was expanded to 582,578 square miles (1,508,870 km2), nearly the size of the Gulf of Mexico. The Monument is protected and managed by four co-trustees — the Department of Commerce, Department of Interior, the State of Hawai‘iand the Office of Hawaiian Affairs. Papahānaumokuākea Marine National Monument is the only mixed UNESCO World Heritage Site in the U.S.

Guided by the U.S. Fish and Wildlife Service's strong wildlife conservation ethic, the Refuge is primarily responsible for monitoring the health of most of the Pacific's subtropical seabird population and wildlife habitat. Providing a safe haven for 22 nesting seabird species, millions of seabirds arrive seasonally to breed, nest and rear their young. In addition, the Service is responsible for the well-being of all native birds and plant species, some that live nowhere else on the planet and whose genetically linked ancestors have long become extinct. Much of the staff’s efforts also support the work of the National Marine Fisheries Service whom monitor reproductive success for most of Hawai‘i‘s green sea turtle population as well as the critically endangered Hawaiian monk seal.

For the past quarter century, the U.S. Fish and Wildlife Service managed year-round field camps offering six month volunteer positions at Laysan and Tern Islands. Currently, the Refuge does not have the staff or infrastructure capacity to operate a safe island-based field operation. However we are planning to offer volunteer opportunities in the near future to help plan and build capacity for the remote island field camps to become operable.

The Refuge hosts some of the most productive wildlife real estate in the world for millions of native sea and land birds.  One square foot of vertical surface area can host up to ten different species of nesting birds all at the same time! Nunulu (bonin petrels) and shearwaters nest below the surface, while albatross and other ground nesters nest on the sandy surface. Meanwhile, high shrubs host the boobies and 'Iwa (frigatebirds), and cliff side habitat protects hinaokū (blue-gray noddies).

Every square inch of the Refuge lying above and below the ocean surface supports wildlife’s ability to reproduce. With the help of human hands, along with years of sub-tropical wildlife island management experience, refuge staff guides specific development of management strategies. For example, measures are in place to help successfully restore island ecosystems such as preventing non-native invasive plants from engulfing island habitat and reducing human impacts by removing literally tons of marine debris.