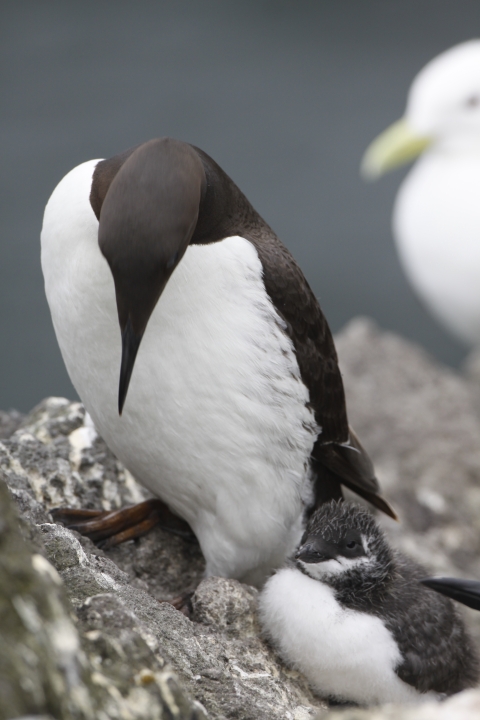 Spring is a time for mate-wooing, nest-building, and brood-rearing among the seabirds. Immense, raucous colonies of breeding pairs and their young crowd the offshore rocks and islands, vying for space and resources. Most years, from early April to July, Peregrine Falcons nest on the cape.

In April and May, also look for pupping Harbor Seals on secluded beaches or reefs. Remember: However adorable these creatures may be, do not disturb or approach them! Undue stress wreaks havoc on growing families.

The warmer, sometimes-sunny days of coastal Oregon summer offer ample opportunity to get outside and get familiar with our breeding seabirds. As brood-rearing began in spring, by summer the colonies are teeming with loud, awkward, quickly-growing chicks.

Further off the Oregon coast, Steller Sea Lions give birth to pups in June and July. Look for their golden-furred masses hauled out at Rogue Reef, Shell Island and Three Arch Rocks.

Fall brings rain and storms to the coast, but it also heralds the arrival of many of our winter migrants. Look for forerunners of wintering species such as scoters, goldeneyes, buffleheads, loons and Harlequin Ducks.

The Cape Meares Lighthouse is of course a perennial attraction, rain or shine. Ditto the two famous Sitka Spruces: Oregon's "champion" spruce, the largest in the state, and the "Octopus Tree," both found on the cape.

The Oregon coast is prime whale-watching territory. Gray Whales, Humpback Whales, Orcas, even Sperm Whales can be spotted here on their annual migrations. The most common sightings are California Gray Whales, migrating to and from their feeding grounds in Alaska's Bering and Chukchi Seas, and their breeding and calving grounds in Baja California.

The best viewing times along the Oregon Coast are during the months of December and March. However, some pods of gray whales are considered residents, and remain near the Oregon coast throughout the year. Bundle up, grab binoculars and head for the coast to catch a glimpse of these seafaring giants.

Cape Meares NWR marries old-growth conifer forest with sheer coastal cliffs, offering a wide breadth of habitat for everything from Pacific Water Shrews and Northwest Salamanders in the damp understory, Marbled Murrelets and Northern Spotted Owls in aging cavitated trees, to Peregrine Falcons and Black Oystercatchers nesting on the bluffs.