The lower Missouri River is the largest free-flowing river in the United States, encompassing nearly 1.5 million acres of bottomland habitat for fish, wildlife and plants, while providing commercial transportation and recreation opportunities for communities across our nation’s heartland. Big Muddy National Fish and Wildlife Refuge was established in 1994 for the development, advancement, management, conservation and protection of fish and wildlife resources. Refuge staff focus on restoring those resources in the Missouri River floodplain on the rivers final 367 miles to its confluence with the Mississippi River, from St. Louis to Kansas City. Currently, the refuge has grown to almost 20,000 acres of wildlife habitat.

The historic Missouri River - nicknamed Big Muddy - because of its murky, sediment-filled waters, serves as beneficial habitat for many wildlife species. The rivers ability to carve through floodplains and create side channels, wetlands and oxbow lakes has attracted and sustained wildlife since the retreat of glaciers from the region thousands of years ago. Drastic changes began to occur on the Missouri River soon after the journey of Lewis and Clark described its wildlife to the world in the early 1800s. Over the next century hundreds of steamships sank in the river and efforts began to control it. By the 1980s, more than 700 miles of river had been channelized, reducing risks but also crucial habitat.

Learn more about structure . If a portion of the structure gives way, the flood water pours through a constricted opening and blows out or scours the substrate away, forming a plunge pool. When the flood water recedes, a semi -permanent water body - one to 40 acres - is left behind. Scour holes provide habitat for fish, amphibians, turtles, birds and mammals. 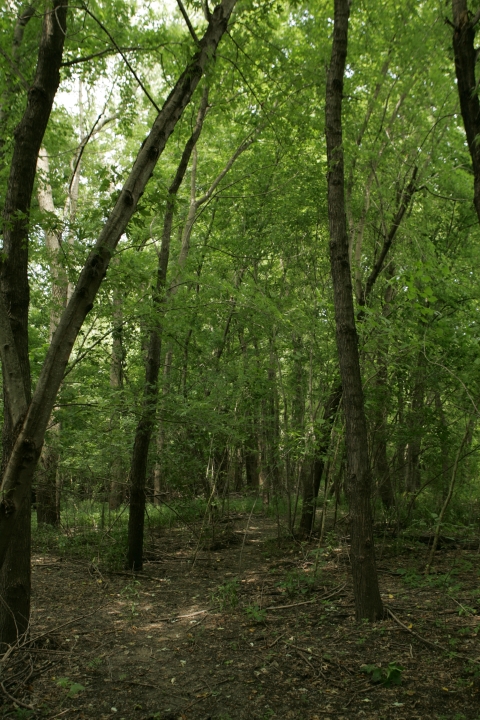 Bottomland forest was the dominant habitat along the Missouri River when Lewis and Clark traveled from St. Louis toward what is now Kansas City. Today, there are no old growth cottonwood gallery forests on the refuge, but there are several thousand acres of young - less than 20 years old - bottomland forest. This habitat is important to a number of migratory songbirds and raptors as well as many mammals, reptiles and amphibians.

Chutes or side channels are unique habitats connected to the main channel of the river, providing shallower and slower moving water for fish and other wildlife. The refuge contains three naturally formed and functioning chutes - Cranberry Bend, Lisbon Bottom and Boone’s Crossing, as well as the remnants of several historic chutes - Jackass Bend, St. Aubert’s Island and Cora Island. These remnant chutes still carry water during flood events. A partnership with the U.S. Army Corps of Engineers has resulted in the construction of three additional chutes, Jameson Island and two at Overton Bottoms, since 2002

Learn more about national wildlife refuge was created for a special purpose. Some were created to protect migratory birds, others to protect threatened or endangered species or unique habitats, while others fulfill another special purpose. All activities allowed on refuges must be evaluated to make sure each activity will not conflict with the reason the refuge was founded.

The purpose of Big Muddy National Fish and Wildlife Refuge is for the conservation, management and restoration of the fish, wildlife, plants and their habitats for the benefit of present and future generations of Americans.

September 9, 1994 - The first parcel of Missouri River floodplain purchased by the U.S. Fish and Wildlife Service as part of the refuge.