Weirs help us establish baselines and detect changes in fish populations over time. They also help fisheries managers evaluate and adjust their management actions, reconstruct past salmon abundances, and forecast future salmon returns. We construct our weirs with panels of evenly spaced PVC pickets aligned parallel to the river’s flow. We anchor the upstream end of each panel to the river bottom and the downstream end is lifted above the surface by a resistance board that planes upward in flowing water. The pickets don’t go all the way across the river, but rather guide migrating fish into a trap box that is occasionally closed so fish biologists can briefly take a few measurements and samples (length, sex, scales for aging, fin clips for genetic analysis) from a subset of fish before releasing them to continue their upstream migration. This information can tell us many things about the health of salmon populations (for example, if fewer bigger, older females are returning to a particular tributary or how different populations are contributing to “mixed-stock” harvests downstream).

All fish also pass in front of a video box on their way through the weir. Standard video components include a sealed box filled with clear water that houses a video camera, pond lights and a digital video recorder (DVR) equipped with motion detection software. Power includes green energy sources like solar panels. With this set-up we can record passing fish 24 hours a day even when the water is cloudy. We route the analog video signal to the DVR where it’s converted to digital format instantaneously. The DVR removes blank footage and only reports motion events. The video footage lets us see the entire run of fish through time and only recording motion events saves staff many hours during review.

Counts from the weir project are reported back to the Fairbanks Fish and Wildlife Conservation Office daily. In addition to Chinook and summer Chum Salmon, we collect information about other fish species important for subsistence use (e.g., other salmon species and whitefish). 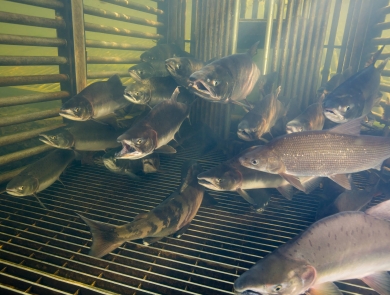