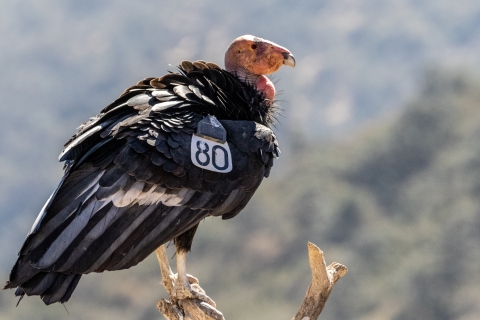 The California condor (Gymnogyps californianus), with a wingspan of 9.5 feet and weighing up to 25 pounds, is the largest land bird in North America. These majestic creatures historically ranged from California to Florida and Western Canada to Northern Mexico. By the mid-20th century, condor populations had dropped dramatically, and by 1967 the California condor was listed as "endangered" by the federal government. In 1982, only 23 condors survived world-wide. By 1987, all remaining wild condors were placed into a captive breeding program. Thus began an intensive recovery program to save the California condor from extinction.

Since 1992, when the U.S. Fish and Wildlife Service (USFWS) began reintroducing captive-bred condors to the wild, the USFWS and its public and private partners have grown the population to 410 birds.

In 2008, the Recovery Program reached an important milestone, with more California condors flying free in the wild than in captivity for the first time since the program began.

During the Pleistocene Era, ending 10,000 years ago, the condor's range extended across much of North America. At the time of the arrival of European settlers, the condor ranged along the pacific coast from British Columbia south through Baja California, Mexico. By 1940, the range had been reduced to the coastal mountains of southern California with nesting occurring primarily in the rugged, chaparral-covered mountains, and foraging in the foothills and grasslands of the San Joaquin Valley. Today condors are being reintroduced into the mountains of southern California north of the Los Angeles basin, in the Big Sur vicinity of the central California coast, near the Grand Canyon in Arizona, and in the mountains of Baja California.

California condors require large areas of remote country for foraging, roosting, and nesting. Condors roost on large trees or snags, or on isolated rocky outcrops and cliffs. Nests are located in shallow caves and rock crevices on cliffs where there is minimal disturbance. Foraging habitat includes open grasslands and oak savanna foothills that support populations of large mammals such as deer and cattle. Condors are known to fly 150 miles a day in search of food. 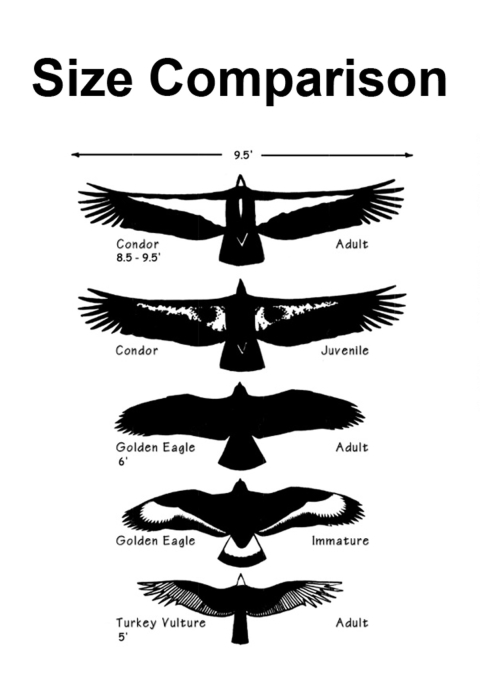 Males and females are similar in appearance. Adult condors have a mostly bald head and neck. The skin of the head and neck is colored in shades of pink, red, orange, yellow, and light blue; becoming more intensely pink/orange during times of excitement and in the breeding season. Feathers are mostly black except for white underwing linings. Juvenile birds have dusky black feathered heads and bodies with limited white underwing linings. At hatch, chicks have light pink and orange skin and are covered in off-white down which is quickly replaced by gray down.

California condors have a wing span of about 9.5 feet. Adult condors stand at a 3 to 3.5 feet and weigh 17 to 25 pounds. Males are generally slightly larger than females. Talons Unlike birds of prey, condors do not have sharp talons capable of killing or grasping objects.

The condor's beak is long, sharp, and powerful. It can pierce the hide of a horse. Condors use their beaks to tear the flesh from carcasses, and to touch, feel, and explore their surroundings. Condors have been observed using their beak to remove foliage from trees to create better roosting sites, and manipulating rocks and other objects in caves to improve the nesting area.

California condors reach sexual maturity when they are 5 to 7 years of age. Courtship The male condor repeatedly performs highly ritualized courtship displays to the female, standing with his wings partially held out, head down, and neck arched forward; he turns slowly around, rocking from side to side. Graceful acrobatic flights, where one partner follows the other, are also performed by the pair. Condor pairs stay together over successive seasons. However, if one partner is lost, a new partner will be sought.

Nests are usually placed in caves on the face of steep cliffs. Two cavity nests were discovered in holes at the top of giant sequoia trees. No nesting material is added.

The female lays a single pale aqua-colored egg, which initially weighs approximately 280 grams (10 ounces) and generally measures 110 x 67 mm (4.4 x 2.7 inches). If an egg is lost to breakage or predators early enough in the breeding season, the pair will often produce a replacement egg in 4 to 5 weeks, a practice known as "double clutching."

Parents alternate incubating the egg, each often staying with the egg for up to several days at a time. Chicks The chick hatches after 54 to 58 days of incubation. The parents share duties in feeding and brooding (warming) the chick. Chicks are fed partially digested food regurgitated from the adult's crop. Flight feathers are fully developed at about six months of age. The chick is dependent on its parents for one to two years as it learns to forage and feed on its own in the wild.

Condors do not kill for food; they are carrion eaters and prefer to feed on the carcasses of large mammals including deer, marine mammals such as whales and seals, and cattle. A condor may eat up to 3 to 4 pounds of carrion at a time and may not need to feed again for several days. Condors find their food by sight or by following other scavenging birds. Condors normally feed in a group where a strict dominance hierarchy is followed. Dominant birds usually eat first and take the choicest parts of the carcass.

Condors are fastidious birds; after eating they bathe in ponds or pools, and will spend many hours preening and drying their feathers. If no water is available they will clean their heads and necks by rubbing them on grass, rocks, or tree branches.

Condors spend most of their time perched, sunning and preening. Condors roost where they can easily launch themselves into flight with just a few wing beats. Roost sites include large trees, snags, cliffs, and rocky outcrops. Condors will often roost in groups and will return to the same roost sites year after year. Dominant birds often take the choice position in a group roost.

California condors can soar on warm thermal updrafts for hours, reaching speeds of more than 55 miles per hour and altitudes of 15,000 feet. Flights in excess of 150 miles in a day have been recorded. Condors hold their wings in a horizontal position and fly very steadily, unlike turkey vultures which fly with their wings held in a V-shape and appear to be unsteady or "wobbly."

Condors are highly intelligent, social birds. They are inquisitive and often engage in play, especially immature birds. They will entertain themselves at length with feathers, sticks, and grass, often playing tug-of-war, and tossing, chasing, and retrieving the objects. This activity is especially pronounced around water holes.