Originally, the hatchery produced trout that were distributed over the entire Rocky Mountain region. Waters which originally held only native cutthroat trout, or none at all, were stocked with additional trout. The Black Hills area and parts of Wyoming that held no native trout were first stocked from this hatchery.

In 1888, the U.S. Fish Commissioner began looking for a site in the Rocky Mountain Region that would be suitable for propagating game fish and replenishing the dwindling number of fish used as a food source. A site at the base of 14,000 foot Mt. Massive was chosen for its cold, clean water supply and nearby sources of native Cutthroat trout. It was at this location that the Leadville National Fish Hatchery was built, Congress having appropriated $15,000 for the facility.

Transporting fish in the early days was not a simple matter of loading them onto trucks and driving them to a destination. “State-of-the-art” shipments were done via train car. In 1881, federally raised fish traveled first class in rail cars designed for their health and comfort - along with their human attendants. By the turn of the century, there was a fleet of these specially designed train cars in use throughout the United States. But not all fish traveled via luxury train cars. Many still reached their destinations traveling in milk cans via horse and wagon. The trip was often perilous and fraught with danger. Such was the report from an employee in 1898 - “first (one can) slid off the wagon and a very few (fish) were spilled; then the top flew out when the mule jumped over a log, -and we lost possibly a couple of hundred, then the rope came out of the handle and the top flew off again but only a few got out . . . " Time brings progress, however, and today fish are stocked using tank trucks and sometimes helicopters. 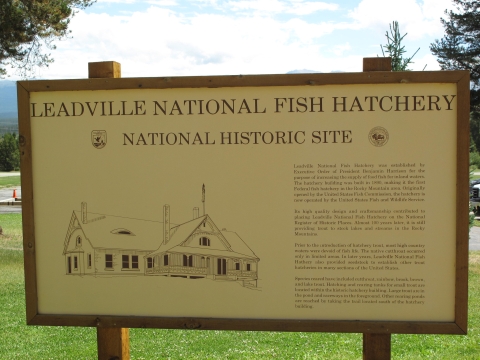 Today, 125 years after its beginning, the Leadville National Fish Hatchery continues to fulfill its role in providing trout for sportsmen and women throughout the Rocky Mountain Region. The actual anniversary is April 19, 2014; however, the celebration will be held on July 26, 2014. The hatchery still welcomes visitors. As in the early days, they can learn about “fish farming," as well as enjoy picnics and hikes on the many trails that meander through the 3,072 acres of hatchery property. During the late fall and winter months, many visitors enjoy snow shoeing and cross-country skiing in the quiet forests above the hatchery.

The main building, still in use today, was constructed of native red sandstone. It required over 30 stonemasons, and was described, in a news article of the day, as “the most magnificent building in western Colorado.” Another article stated, “The hatchery promises to be a great resort for sightseers and those desiring to observe the great insights of “fish farming.” In fact, then, as now, encouraging visitors was a high priority. The grounds were planned and maintained with an eye to attracting visitors, and it was noted that they would “always be welcomed and every courtesy shown to them.” This beautiful stone hatchery building was placed on the National Register of Historic Places in the 1970's. The view from the front of the hatchery remains as beautiful as it was in 1889 - perhaps more so. Seen off in the distance, the city of Leadville is surrounded, once again, by the growth of pine forests that were depleted for construction and mine timbers during the silver boom of the late 1800's.

The raising of trout at the hatchery began even before the completion of the main building. Eggs collected from trout from several high Colorado lakes were incubated in a temporary building during the fall of 1889. In 1891, the first distribution of fingerling fish was made to lakes and streams in Colorado, South Dakota, and Nebraska. A newspaper article from 1910 reported that “the usual of brook trout was successfully made to Argentina. Rainbow eggs were forwarded to Germany and to the private preserves of his Imperial Majesty, the Mikado of Japan, while spawn of the native trout has been forwarded to France.” Native trout were also sent all over the United States from Maine to Washington, including Wyoming, New Mexico, Arizona and Nevada.