Image Details
"We are Aleuts. Let the People Know."
Aleut Evacuation and Internment

Greg Fratis, Sr. was two years old the day his village of St. Paul, Alaska was forcibly evacuated during World War II. Years later, he heard the full story from his elders: the town’s annual baseball tournament was underway when a relative ran home with the news on June 14, 1942.

“We’re gonna have to leave St. Paul. One suitcase. The boat is here. Just take that suitcase, don’t say anymore. We’re going to East Landing and we’re going to go aboard the ship they call Delarof,” Fratis recounted at an event commemorating the 75th anniversary of the evacuation.

In the decades that followed the war, St. Paul and neighboring island, St. George, have memorialized the day of dislocation with a community walk to the remains of East Landing boat launch, the site known as the “evacuation point.” At the invitation of tribal president Amos Philemonof, officials from the U.S. Fish and Wildlife Service joined the islands’ residents during the 75th anniversary to apologize for their agency’s role in the internment of Fratis and the Aleut people. (Some Aleut people who are reclaiming their language prefer to be known as Unangax people).

Within six months of the United States declaration of war on Japan and Germany, the U.S. Navy issued orders to evacuate the civilians on the Aleutian Chain and Pribilof Islands. Although military personnel evacuated the Pribilofs, the Fish and Wildlife Service had a significant presence on the Islands as managers of the fur seal pelt industry, a government for-profit venture for which the Aleut people were forced to work.

Nineteen U.S. Fish and Wildlife Service sealing agents would soon become wards of the Aleut evacuees at a location far away from their homeland in the Bering Sea. The agents and 477 residents from St. Paul and St. George were loaded onto the U.S. Army Transport Delarof, destined for Funter Bay in Southeast, Alaska.

“My love for this place is so great, I cannot imagine walking out there to East Landing, with one bag with your belongings…to get on the Delarof and look back and not know if you’ll ever come back again,” said Aquilina Lestenkof, the Director of Cultural Affairs for the Tribal Government of St. Paul Island and organizer of the commemorative events.

The Aleut peoples’ internment at Funter Bay lasted two years under the supervision of the Fish and Wildlife Service, and many did not make it back. Nearly 50 people died from the cold, crowded, difficult and inhumane conditions. Their graves remain in Funter Bay. 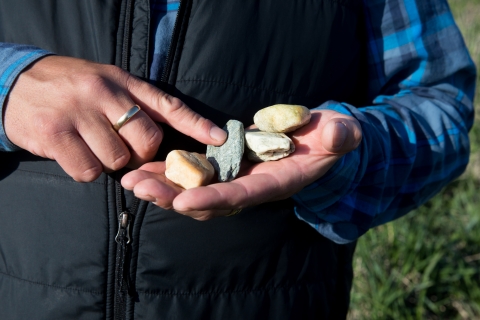 Tribal President, Amos Philemonof, holds stones carried from Funter Bay to be placed with the memorial at East Landing.

Nearly 10 years ago, Lestenkof and Mary Bourdukofsky, a village elder who survived the internment, wrote a song for the annual walk to the evacuation point to help make sense of their history.

“It’s so big. There’s so many things to it. There was the hardships of people leaving, but there was this force to be reckoned with that came back,” Lestenkof said. “It didn’t happen overnight. It was like decades. Four to five decades to gain the freedom we have now.”

Fratis survived as part of that force. At the June ceremony he told the crowd that there had been “anger in my heart” when he read and heard the stories of their suffering, but now he was changed.

“Let’s not let it happen again,” he said, as he closed with the words of the late Mary Bourdukofsky. “Let’s be who we are. We are Aleuts. Let the people know. Everybody be proud of your heritage.”

Later that day, the 77 year-old Fratis took to the ball fields to throw the honorary first pitch of the summer’s games. 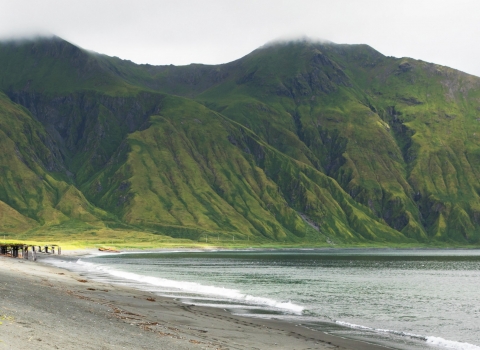 History and Culture
Refuge and Remembrance