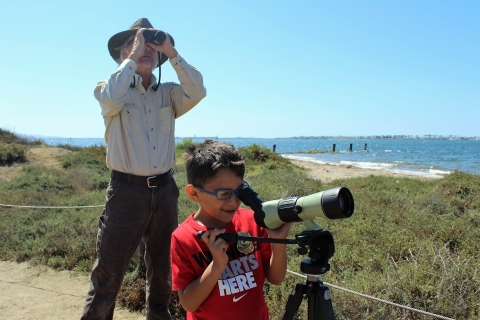 As one of the most biologically rich areas in the world, San Diego provides tremendous opportunities to expose a diverse urban audience to nature within their own backyard.  Working with partners, the SoCal Urban Wildlife Refuge Project has extended its reach into neighboring communities to engage new audiences in outdoor recreation, education, career development, and stewardship. Combining our efforts the Living Coast Discovery Center, Earth Discovery Institute, Zoological Society of San Diego and others, we are educating a diverse community of students and teachers, and engaging the next generation of conservation and nature enthusiasts who will ensure a future southern California rich in wildlife and wild places.

No other species is as iconic as the California condor in representing the success and value of partnerships and collaboration in preventing extinction. Throughout the range of the California condor, significant conservation is being delivered by a wide variety of agencies and partners. CondorKids, another Urban Wildlife Refuge Partnership is an important contribution to the landscape-level conservation delivery by building long-term sustained support within local communities to educate children and their families about the plight of the California condor and foster a connection with the condor both inside the classroom and at Hopper Mountain National Wildlife Refuge.